Welcome to August!  The month when we are supposed to see a lot fewer bears fishing at Brooks Falls.  Usually the bear exodus to smaller streams, maybe berry picking, or places unknown starts in late July as the salmon run slows down.  This year someone forgot to tell the salmon or the bears! We continued to see a lot of bears at the falls and many, many salmon still attempting to jump the falls this past week!  This is apparently due to the record setting sockeye salmon run this year. We’ll take it! The adult bears were busy high-grading (eating only the fattiest parts of the fish) which led to large quantities of scraps floating away for the younger bears and sows with cubs to scavenge.  We also had good views of other wildlife, including a Sub adult Bald Eagle posing in a tree top at sunrise, a wolf prowling around the cutbank and lower river area, and large groups of gulls sitting on fallen trees in the river and amassing on the spit. Here is a compilation video that includes clips from the views we talk about this week. 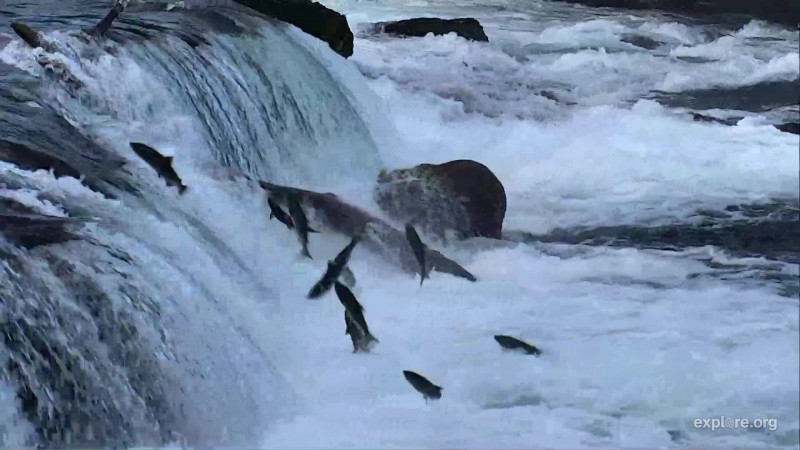 Lots of salmon attempting to jump the falls Snapshot by Bookmom 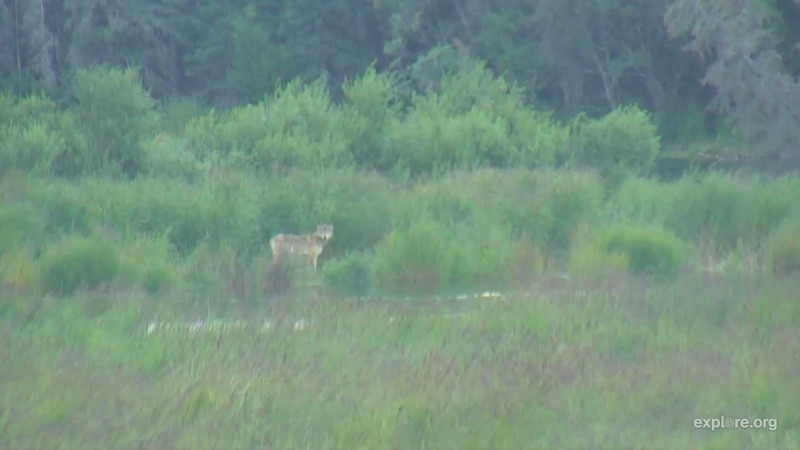 Wolf on the lower river Snapshot by CamOp HG Wells

As we were writing this blog a new sow with two coy showed up to the falls. She was seen along the far bank with her cubs in tow, caught a fish and then took it up top of the far bank to eat. She and her cubs laid there for quite sometime before coming back down. Explores Bearcam Fellow Mike Fitz had this to day about the new sow and coy:

“A new mother bear with two spring cubs has arrived at Brooks River. While I’m not 100% confident in this ID (and certainly the on-site staff at Brooks River could prove me wrong), this mother looks like she might be 505, who we haven’t seen yet this year. Mother with spring cubs often alter their movements to give their cubs a higher level of protection. In doing so, they are weighing the risk of bringing their cubs near other bears with the reward of food. For some mothers the risk is too great. Even on Kodiak, where like Katmai most bears are reliant on salmon, some mother bears will avoid salmon streams when they have spring cubs.” 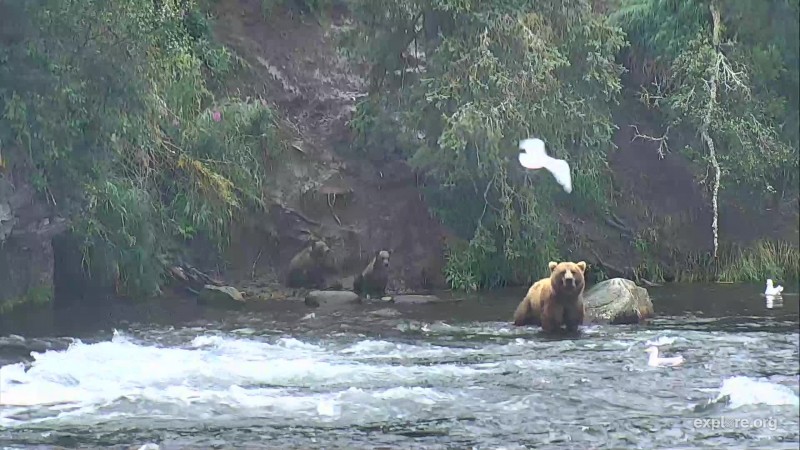 505 and her two coy Snapshot by Greenriver

Bears seem to be creatures of habit when it comes to their fishing strategies.  While they can and will try out new places and methods of fishing, it seems like we can count on some of them to repeat behaviors we’ve seen in the past.  402 proved that this week. Not only did she bring her spring cubs to the falls a few times, but she took them to the top of the falls, where they waited on the cement fish ladder barrier while she tried to fish the lip!! This is something long time viewers have witnessed with her past litters.  Her 4 little cubs made for some of the cutest pictures this week. First they lined up on a fallen log in the river as they tried to get close to 402 without getting wet. Then, later they posed up at the top of the falls. No cubs tried to surf the falls during this visit, much to the relief of viewers who were holding their breath! 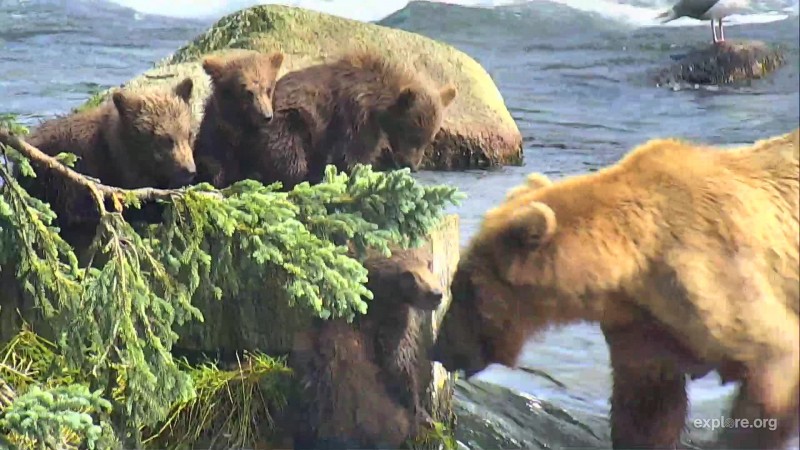 Speaking of creatures of habit, 409 Beadnose and 128 Grazer have resumed their fishing arrangement on the lip several times.  It’s a tenuous arrangement that involves a good deal of growling and attempts to move in and move the other bear out of the favored spot that they both use.  Since both bears are well fed now, for the most part they “take turns” at the favored spot. One moving in while the other moves off to eat her catch. 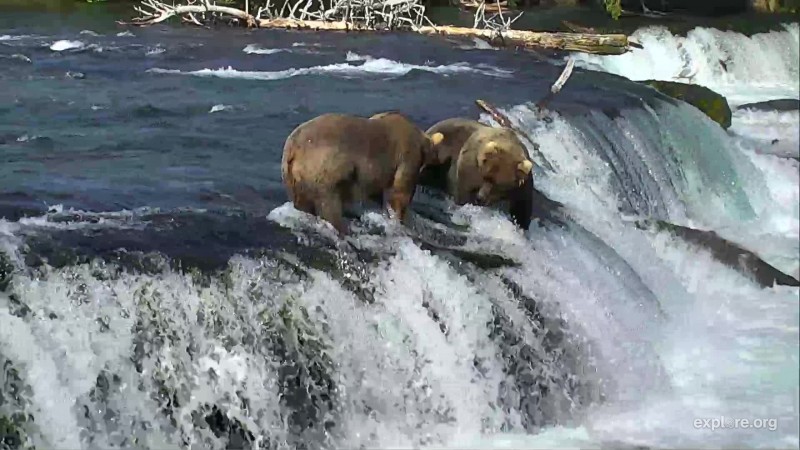 While 128 was willing to “share” the lip with 409, she was not willing to share it with 151 Walker.  She charged across the top of the falls as Walker was fishing the lip. As Walker attempted to remove himself from the area while not turning his backside to Grazer (perhaps due to memories of her swatting him last year) he slipped and went over the edge of the falls backside first.  It was not a very graceful decent…. 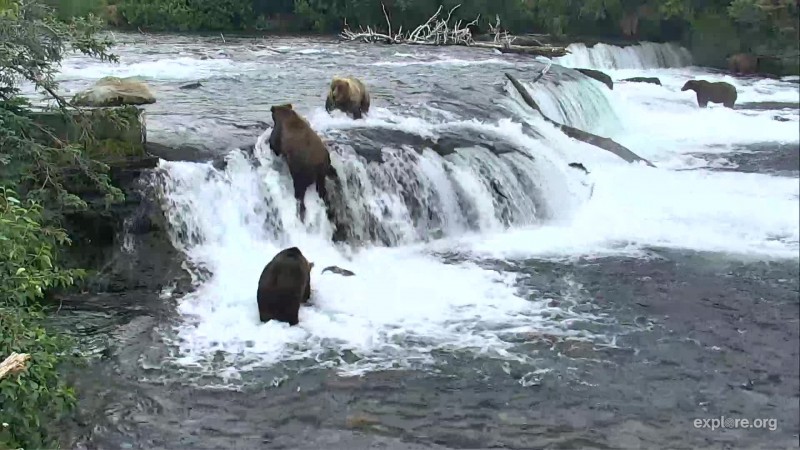 128 Grazer did seem to step a little out of character later in the week when she was seen begging fish from 503 in the office area.  She repeated this behavior a couple of times. Since there were plenty of salmon available, and 128 is good at fishing multiple places at the falls, it’s unknown why she chose to do this. Mike Fitz was doing a question and answer session on explore’s twitter page and had this to say about the interaction: 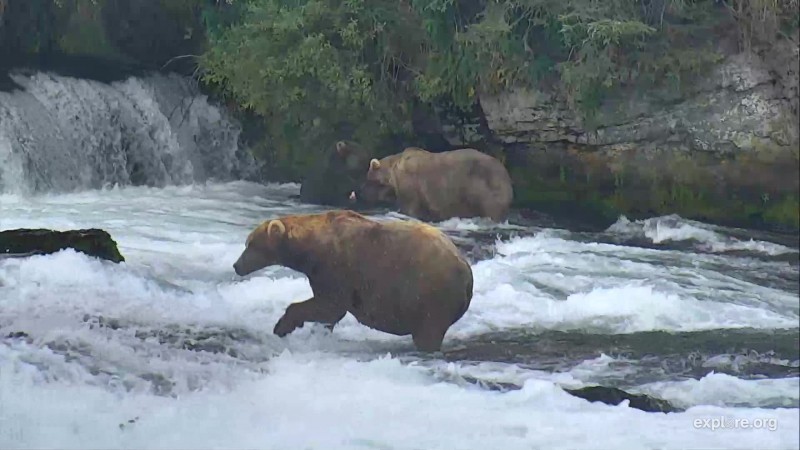 Most all the sows with cubs were seen this week.  We saw 451 and 435 Holly with their yearlings. 132 and her coy were seen fishing in the Lower River.  402 and her 4 coy were seen. 94 was seen treeing her cubs at the Lower River. And Ranger Russ shared photos of 813 with her cubs.  The only sow and cubs not seen were 482 Brett and her 3. Rangers reported she hadn’t been observed for over a week. 132 and coy snorkeling on the LR Snapshot by kcanada

As mentioned, 94 has been treeing her cubs on the far side of the Lower River area.  She’s done this a few times this week. One time the cubs were up in the tree for around 4 hours while Mom was fishing.  94 climbed up the tree after them one time before they all came back down. As this is being written on Thursday afternoon, the cubs were once again up in the same tree while 94 went fishing.  While it is not unusual for sows to tree their cubs – or for cubs to tree themselves if left alone or if they are scared – for extended periods of time, 4 hours seemed a little longer than most sessions. Monday, July 30 turned out to be the night of 451 and yearlings wreaking havoc on unsuspecting bears and viewers. She and the cubs pirated fish from 503, 854 Divot, 435 Holly’s yearlings and a few subadults. She started the evening off entering from the fish ladder and taking scraps from 854 Divot who made a run for it. She and the cubs then sat on the bank near the fish ladder. When she felt 503 was getting too close to the cubs, she bluff charged him and they got into a little kerfuffle. 747 was fishing the jacuzzi when this happened and he rushed out and 451 went after him! A short while later 451 and her yearlings made their way out to the island where she pirated fish from a couple subadults. One in particular she backed up all the way from the front of the island to the side near the platform, the subadult didn’t want to give up its catch easily. She also entered the jacuzzi and made 503 drop his fish and she and the cubs grabbed it. 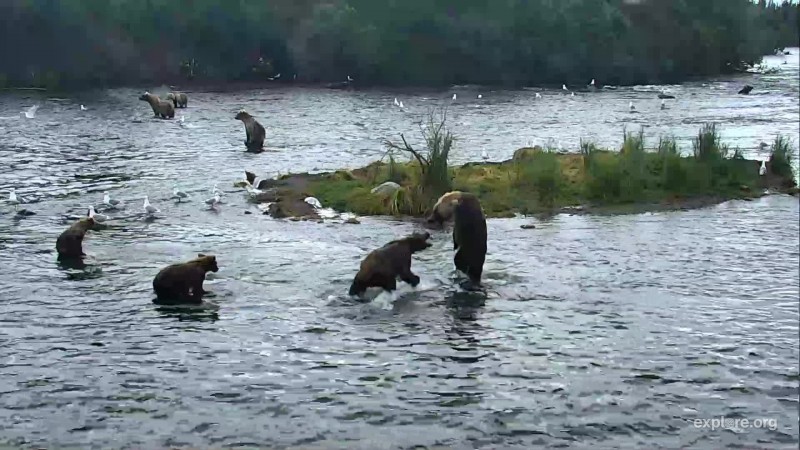 451 backs up subadult Snapshot by Bearz61 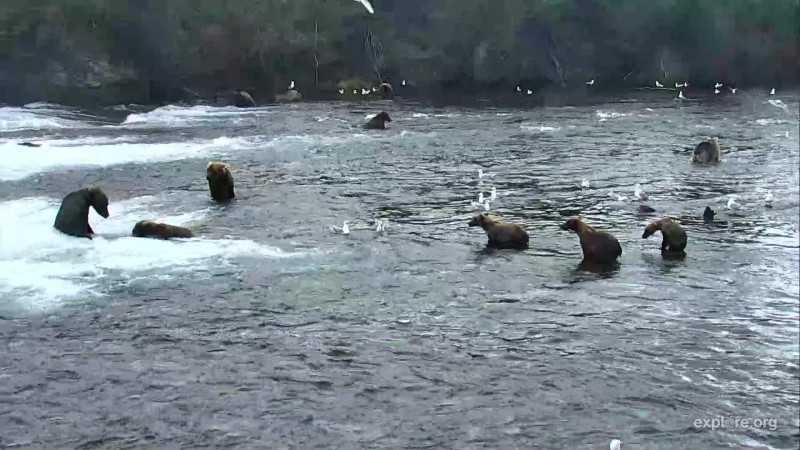 Mike Fitz had this to say about her taking fish from 503: 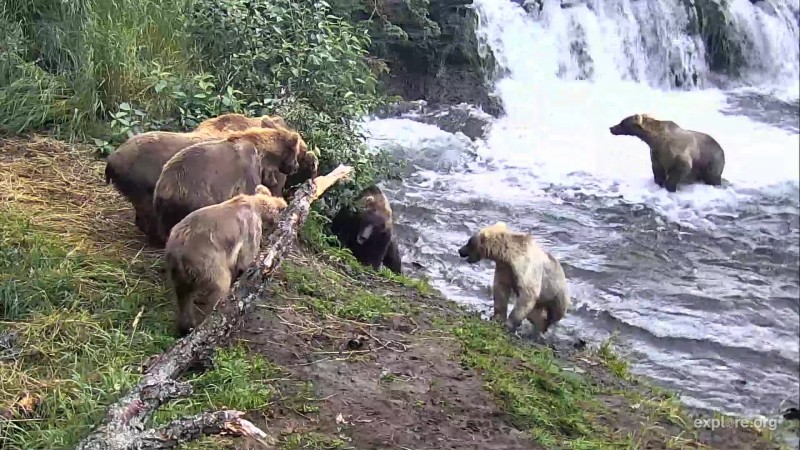 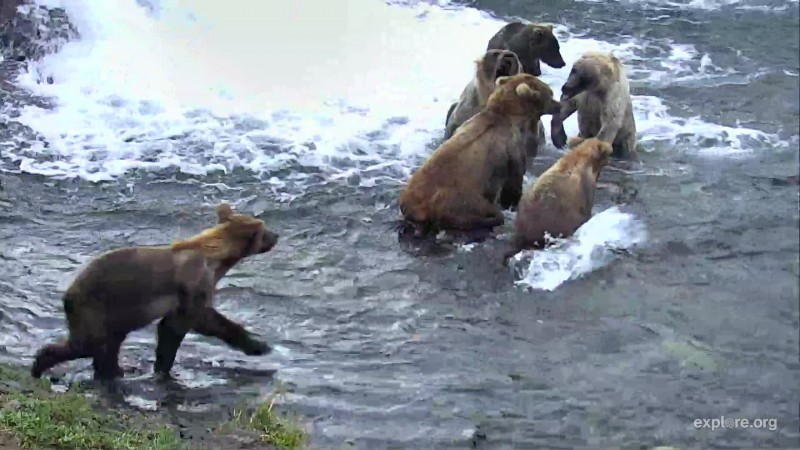 Mike Fitz was watching and tweeting about the nights activities and had this to say:

“I don’t recall 451 trying to steal as much as she’s done tonight. This might reflect a greater level of hunger for her and her cubs compared to other bears at the falls.”

Later in the evening 435 Holly was seen trying to fish the lip as her cubs sat on the fish ladder watching her. 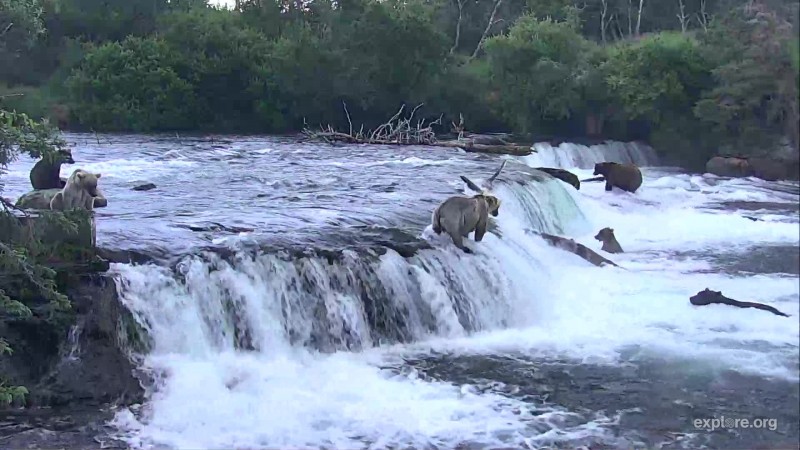 435 Holly on the lip Snapshot by Cruiser

The underwater cam continues to give us some great shots of bears snorkeling by the cam. This week it caught a bear diving to the bottom of the river bed to retrieve a dead salmon. A bear dives to retrieve a dead salmon Snapshot by mtnlovingal

We’ve still seen a little jockeying for position by the larger boars fishing the falls area.  While 856 and 32 Chunk haven’t been around, 747 still likes to throw his considerable bulk around with the less dominant bears and has been observed doing so this week.  Even 480 Otis has taken a couple opportunities to show he still has more dominance than some other boars by letting 801 and 775 Lefty know he still has seniority. 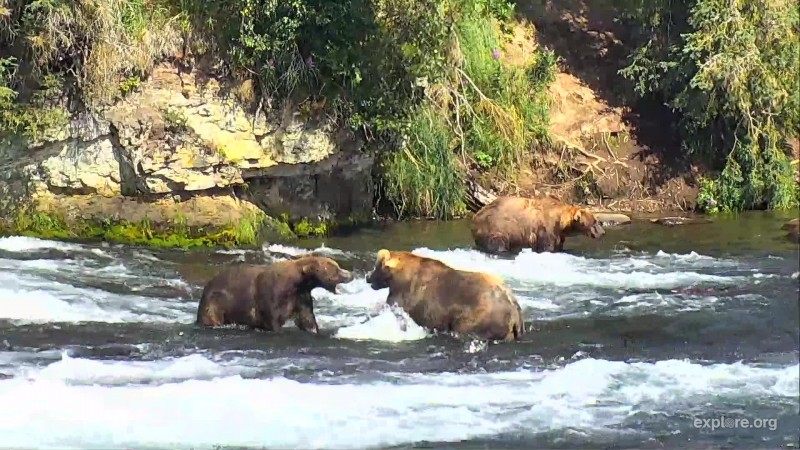 The younger generation of bears, specifically sub adults and cubs, take frequent breaks from fishing to play.  A memorable view this week was seeing two of them play near the floating bridge. Sometimes they were both on one side, sometimes one was under and one not, and sometimes they were on opposite sides looking underneath at each other.  At one point they looked around the end of the bridge, across the wooden walkway and you could imagine them taunting each other to come around. One finally did hop up on the walkway and dash to the other side to splash into the river and continue their game. 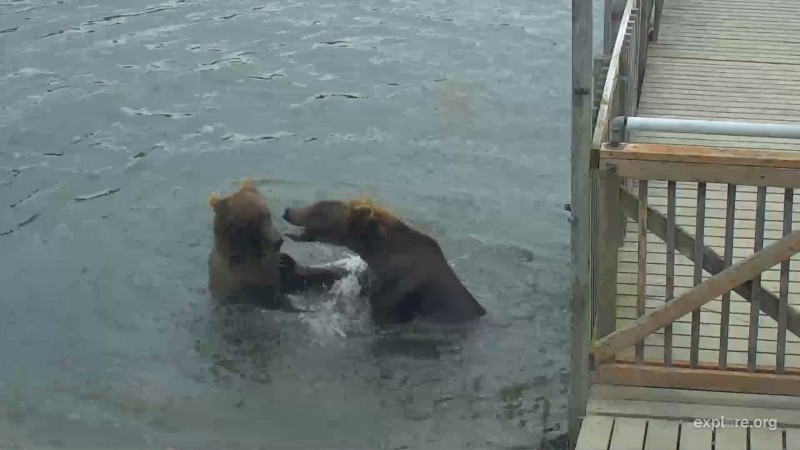 two subadults playing around the floating bridge Snapshot by Shel_

Holly’s two cubs also spend a good deal of time in the camera view playing, wrestling, and chasing each other.  They seem very independent of Holly and she allows them their freedom. She will, however, quickly spring into protective mode and chase off any other bears who seem to be getting too close to her cubs. Our favorite moments from the week:

My favorite moment would have to be when we caught 402’s little coy all lined up on a log out in the riffles. They looked so cute all perched up there, and one kept falling into the river then would climb back up. I had never seen coys perched out on a log like that before. My favorite moment(s) this week have already been covered above. I love to see young animals play or play fight. They live pretty harsh lives overall so seeing them get a chance to have what we would call fun when they are young is just great. Both the sub adults playing around the bridge and 435 Holly’s cubs playing were my top moments.

We had a few live chats and PBP’s this past week as well.