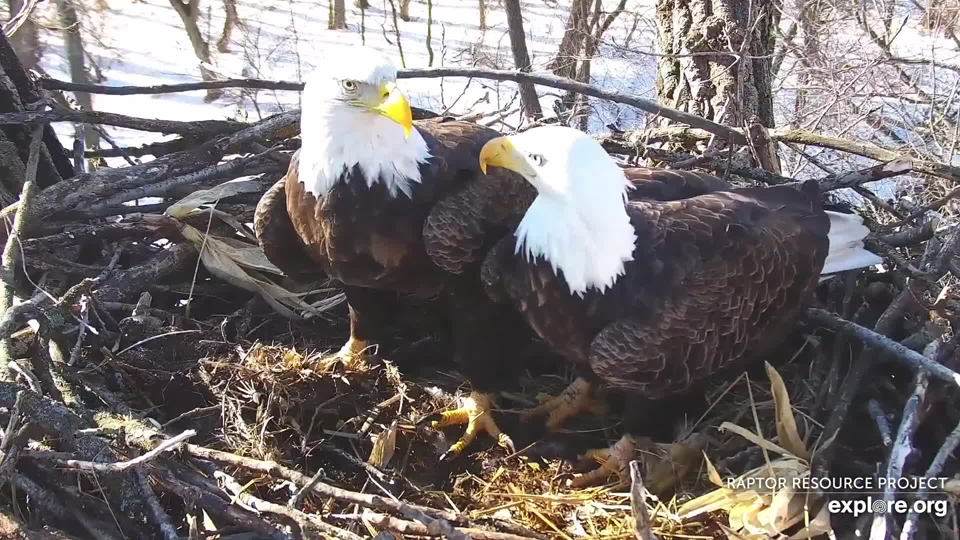 February 5, 2020: Mom and DM2 stand wing to wing in the nest. These brief moments occur with increasing frequency as courtship deepens.

Courtship, copulation, and other things romantic!

This is a traditional Valentines Day post for us, but we decided not to wait this year…just in case one of our eagle pairs lays eggs early!

Bald eagles are famous for their whirling nuptial flight, but eagle courtship includes any activities that establish a new pair bond or renew an existing one. At our Decorah, Decorah North, and Fort St. Vrain nests, courtship usually begins in early October. Bonded pairs start working on their nests by bringing in sticks, large branches, and soft materials to replenish and rebuild them.

As courtship deepens in December and January, eagles ramp up their nestwork, burying last year’s nestorations under piles of new sticks and heaps of corn husks, corn stalks, and fluffy grass.  Male eagles bring food gifts to their mates, eagle couples perch and vocalize together, and eagles prepare their nest bowls for eggs by digging, scraping, and molding multiple layers of soft stuff to the nest’s floor. Couples move from working and perching together to pecking, footing, body brushing, and displaying as they signal their growing interest in bonding. 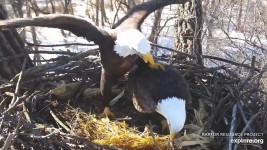 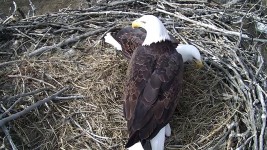 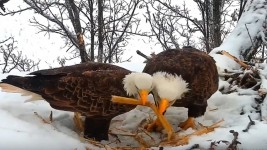 January 24, 2020: Mr. North and DNF place materials on the North Nest. Working on the nest together reinforces their bond. 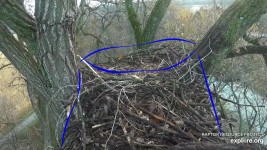 N2B on November 11, 2019. Mom and DM2 have just started this season’s nestorations 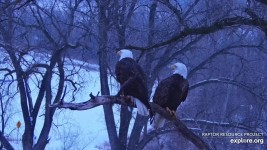 January 31: Mom and DM2 perch together near N2B 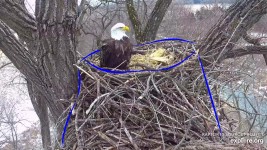 N2B on January 6, 2020: Mom and DM2 have replenished the nest with piles of sticks and heaps of grass. 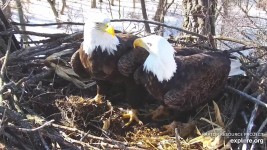 February 5, 2020: Mom and DM2 stand wing to wing in the nest. These brief moments occur with increasing frequency as courtship deepens.

Male eagles, like most male birds, lack an external phallus. Eagle mating goes something like this. An eagle (usually but not always the male) approaches its partner, vocalizing, swishing its tail, and leaning into or looming over its object of desire. An uninterested female (not now, dear!) might respond by standing up and starting what looks like a breast-bumping competition. An amorous female tilts forward, allowing her mate to land with his curled feet lodged on her back. She twists and moves her tail feathers to one side so he can press and twist his cloacal opening around her cloaca, passing sperm from his cloaca to hers. Intense, rapid vocalizations often precede and accompany mating, which takes seven to twelve seconds.

Female eagles also approach and mount their mates, letting them know in no uncertain terms that they are receptive and ready for copulation. This behavior varies widely from nest to nest and eagle to eagle. Mom and Harriet from the SW Florida nest take the lead on a fairly regular basis, but it’s rare for DNF and Ma FSV to do so.

Bald eagle mating – not as straightforward as we once thought!

Why do some male eagles seem timid? Why do some couples bond more often than others? As Sherri Elliott pointed out, Mr. North and DNF bonded frequently in their first year together, while DM2 needed a lot of encouragement to approach Mom. Mom and Dad were long-time partners, but Mom dominated Dad more than Ma FSV dominates Pa FSV – another long-time eagle couple. Sex, age, relationship status, and eagle personalities all influence bonding behavior. Look for them at every nest you watch – and read more about the difference between the two Decorah nests here: https://www.raptorresource.org/2019/12/31/whatta-year-a-tale-of-two-nests/ 4slovo

We know a lot more about eagle bonding than we did back in 2011! At the time, people believed that eagles didn’t bond very often outside their fertile periods. While female eagles were receptive to bonding, they seldom initiated it and always assumed a submissive role during copulation.  But bird cams revealed a whole new world! Couples bond well outside their egg-laying period,  although bonding becomes more frequent and intense when eagles are at or near peak fertility. Both male and female eagles initiate bonding and either one may assume a dominant role during copulation. Territorial eagle couples are usually monogamous and are not known to participate in extra-pair bonding, but mating systems can include thruples instead of couples. Whatever an eagle’s inner landscape looks like, their pair behaviors are richer and more complex than we once believed. The more we learn, the more questions we have!