Salmon on the underwater bearcam

Salmon, as the keystone of Katmai’s ecosystem, are a focus for attention by people and bears alike. Many salmon can be seen swimming in front of the underwater bearcam, and several questions regarding them have been submitted through the Bearcam Question form.

I’ll answer Judy’s question first as it will help provide some perspective on the other questions. The underwater camera is located on the floating bridge near the mouth of Brooks River. More specifically, it is about two-thirds of the way across the bridge from the lower river camera. 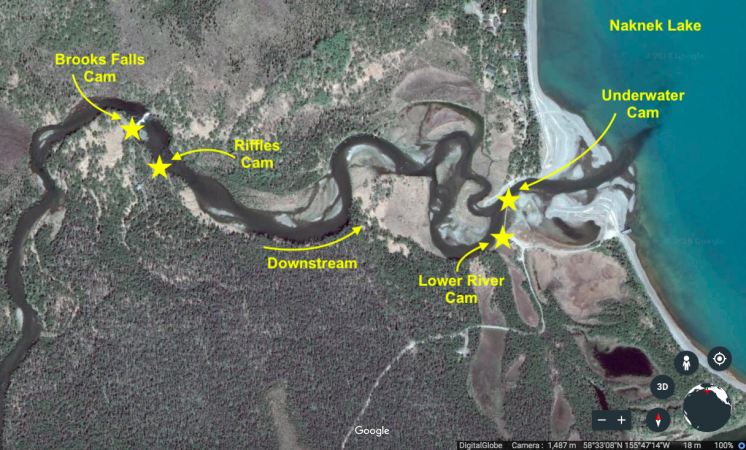 The underwater camera is located near the mouth of Brooks River. It is in the main river channel near the north end of the floating bridge.

The underwater camera looks downstream toward Naknek Lake, so the salmon we see on it are orienting upstream. Adult salmon, unless fleeing predators, orient themselves upstream in order to more easily hold their position in flowing water. When we see salmon swimming away from the camera, it’s usually a response to people and vehicles on the floating bridge or bears swimming in the water.

Not quite lethargic, these salmon are behaving efficiently. Migration and spawning are extremely taxing activities, and salmon stop eating once they reenter fresh water. They must fuel their entire fresh water migration and spawning period with the energy stored in their bodies. Even though the migration period for Brooks River’s sockeye salmon has largely ended for the year, most sockeye won’t spawn in the river until September and some won’t spawn until October—two full months after they arrived. To save energy and stay safe until the right time to spawn, they stage at the inlet and outlet of Brooks River, holding in relatively calm areas of water where they can easily escape predators. This explains why they seem to be swimming in place. The calmer, deeper water near the outlet of Brooks River provides salmon with a temporary refuge that is relatively safe and costs them little energy.

If you have other questions for explore.org’s bearcam fellow, Mike Fitz, or Katmai National Park rangers you can ask them at anytime by using the Bearcam Question form. They may answer your questions during a live chat, in a blog-post, or during their twice-weekly text chats in the comments in the Brooks River live chat channel.