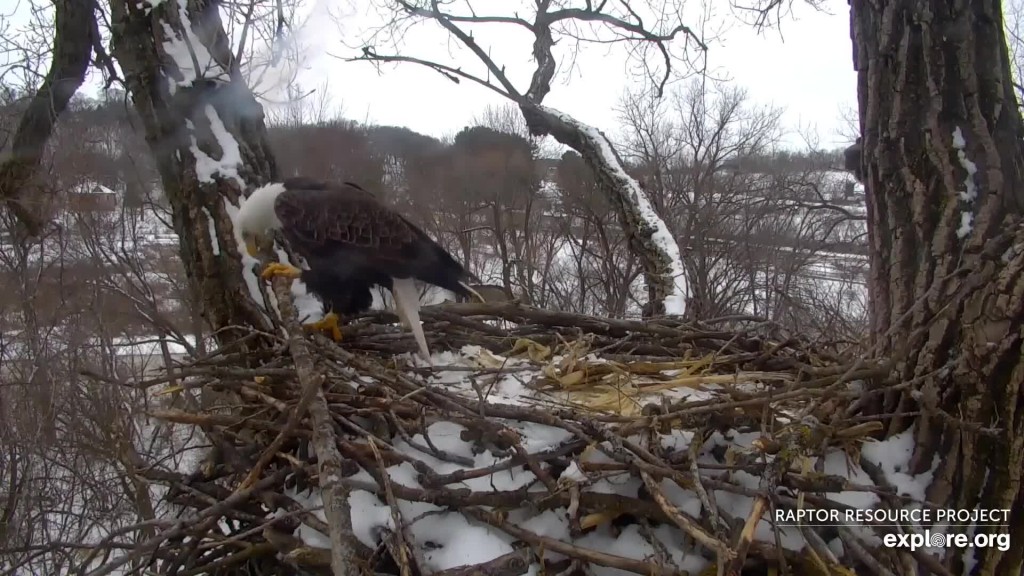 How much weight can a Bald Eagle carry?

On February 12 of 2020, DM2 pole-vaulted into the nest with a stick that looked more like a small tree! On November 6 of 2019, Mr. North dropped a stick of unknown weight, although it was clearly more than he could lift from the ground: https://youtu.be/x0Cb6S79Kz4. And on November 4th of 2015, photographer Alex Lamine photographed the female bald eagle at Berry College carrying a very large stick, which she dropped. It turned out to weigh 12 pounds! How much can bald eagles carry? Under the right conditions, a little over 100% of their body weight! Read on to learn more.

We’ve speculated quite a bit about how much weight eagles can carry.  I talked to Professor Jim Grier (he has studied birds of prey extensively and owned golden eagles) , Brett Mandernack, Neil Rettig, Chuck Sindelar (a friend of Bob’s who was deeply involved in bald eagle recovery), Jon Gerrard (who wrote The Bald Eagle: Haunts and Habits of a Wilderness Monarch with Gary Bortolotti), and Professor David Bird (among other things, the author of The Bird Almanac, A Guide To Essential Facts and Figures of the World’s Birds). They told me that the amount of weight a bird could carry was highly dependent on the situation, including:

Before we get to the rest of the blog: watch the video above and you’ll see that DM2 dropped in from above. It looks like he broke the stick off somewhere above the nest and glided down rather than lifting up. Eagles are masters when it comes to maximizing energy!

What the eagle experts said about eagles, flight, and sticks

Grier compared eagles with aircraft and talked about dynamics, flight conditions, and how the object was carried: “I sometimes got the impression that my golden eagle could carry as much or more in his crop than in his feet, but never got any good measurements or wrote down details. For example, he could capture a large rabbit that he could not fly with…but then he’d eat most of it and be able to fly with a really full crop. I think the trim of the eagle, as in airplanes, and drag/balance of carried items, is important.” He added: “Flight conditions make a big difference, particularly at the limit of weight, as with aircraft. The best conditions are high air pressure with a steady wind plus room and conditions for a good take-off, all of which affect the ability to get airborne and then stay airborne. I’ve seen bald eagles carry large fish under some conditions, for example, that they couldn’t under other conditions.”

Think of an airliner. Cargo is balanced around the center of gravity inside the plane, not dangling below it. According to the FAA, center of gravity deviations as small as three inches can dramatically change the handling characteristics of some fully loaded aircraft. When Jim’s golden eagle ate a large rabbit, it was for all practical purposes ‘balancing’ the cargo in its crop, which is located in the center of its neck above the top of its chest. In this case, balance was a bigger issue than weight as far as lift and stable flight were concerned. For more information on how the center of gravity affects flight, watch this video: https://youtu.be/00CGAPOp7A0

Chuck Sindelar wrote about watching golden eagles play with sticks outside of nest-building season. “They would fly off with a stick and gain altitude by circling. A second golden eagle would follow the first up into the sky and would get into a position where, when the first bird with the stick dropped it, the second bird would dive and regrab it, often before the stick reached the tops of the trees below. Sometimes he would have to pull out of his dive and allow the stick to hit and enter the trees, and then both birds world move a bit away and do this all over again with a new stick.” He also pointed out that while he had never personally seen a bald or golden eagle carrying sticks that large, he had often seen them in nests.

Jon Gerrard expressed interest in how sticks are carried. In the case of the Berry female and DM2: “…it would be more common for an eagle to fly in to a limb, usually a dead limb, and break it off in flight. Did the eagle gnaw it off at the thickest part of the limb? If so, how did it end up holding the thin part of the limb in its talon? Did it gnaw it part way through at the thick end, and then fly to grab the thin end and fly with it to break it off at the thick end? And how far did it carry it before dropping the limb?” He recounted a story from the book “The Bald Eagle Haunts and Habits of a Wilderness Monarch”, which he wrote with Gary Bortolotti (pages 35 and 36)

“It is of a pair of eagles nesting along the Gulf Coast of Louisiana in the 1890s. The female regularly caught and carried Snow Geese (Blue phase) – probably weight 4.5 to 6 pounds – for up a a mile and a half to their nest. The Geese were caught high and the eagle was able to glide down to the nest with the goose. This feat was repeated on a number of days, and there were apparently 35 blue goose heads found in the nest, suggesting it was a common practice. The feat was likely possible because the geese were caught high in the air and going to the nest was downhill. Since this eagle was nesting in the southern part of the range, the female’s weight would likely be in the 8 to 11 pound range, so the bird would likely have been carrying about half its weight.”

Neil Rettig shared some of the observations he made filming bald eagles along the Mississippi river: “In 2015 I was able to get a nice shot on video of a bald Eagle near Stoddard collecting a big branch from the canopy of a cottonwood tree. I have seen this many times. I also filmed a juvenile bald eagle 2 winters ago catching an adult mallard in the air and having a hard time keeping it aloft. In high winds eagles can lift more, as Jim pointed out. In winds they can hover for long periods 30 seconds or more to attack and work ducks and coots.”

In general, the expert panel felt that in most circumstances, it would be unlikely for a bald eagle to carry much more than 50-60% of its body weight. However, it might carry more if the incentives and flying conditions were right: favorable winds, a down-carry versus an up-carry, a momentum capture versus a dead-lift, plenty of maneuvering and flapping space, a well-balanced load, and a highly desirable object like a large stick or a dead fawn.

How much can birds carry?

Professor Bird provided a table from his book, The Bird Almanac, A Guide To Essential Facts and Figures of the World’s Birds, which I found absolutely astonishing! According to his information, a bald eagle should be able to carry 108% of its body weight. Check out the American kestrel at 145%, the Pallas’s Fish Eagle at 160%, or (Bella fans take note!) the tiny Calliope Hummingbird carrying its mate – 116% of its body weight! 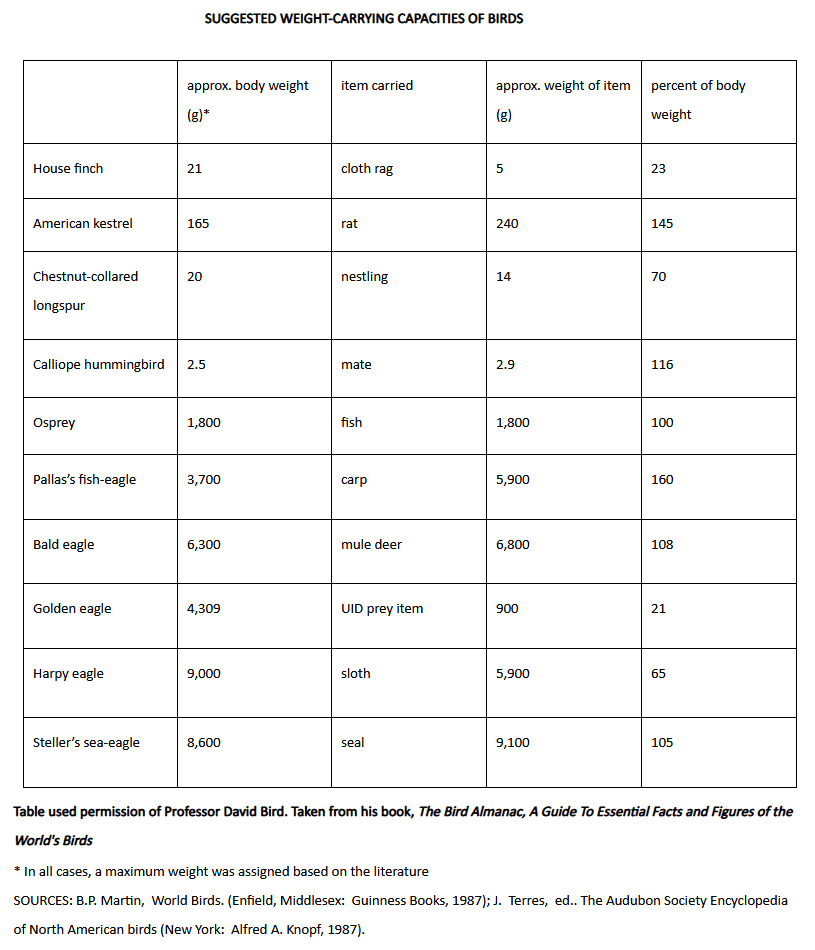 Table used permission of Professor David Bird. Taken from his book, The Bird Almanac, A Guide To Essential Facts and Figures of the World’s Birds.

Under favorable conditions, eagles can carry, or at least glide, with around 108% of their body weight. Unfortunately, conditions weren’t favorable for Mr. North today. He probably weighs around nine pounds, although we don’t know how much the stick weighed. But he took off from a low angle, he had to put a lot of work into gaining lift, the wind was blowing from an unfavorable direction, he lost lift making a turn towards the nest, and the stick was swinging slightly, making it harder to carry. Once he dropped the stick, it was more than he could dead lift from the ground.

So why did DM2 bring a heavy stick in when Mr. North and the Berry College female failed? Those two eagles might have had ideal conditions for snapping sticks (favorable winds and plenty of room), but they were trying to lift heavy, poorly-balanced sticks with the weight to one side. Their sticks swung rapidly down to hang like a weight below each eagle, causing them to roll, pitch, and lose lift. Sudden center of gravity changes are never a good thing, especially when the object you are flying with weighs more than you do! DM2 appeared to be gliding down, not lifting up, and his trajectory carried him – and his giant stick – right into the nest!

Thanks so much to Jim Grier, Chuck Sindelar, Jon Gerrard, David Bird, Brett Mandernack, and Neil Rettig for talking to me! I feel very honored to learn from such accomplished and intelligent people. Any mistakes in the information presented here are mine. RusBankNet

A few links – some for learning and some for fun!