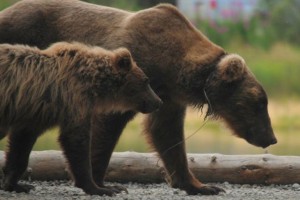 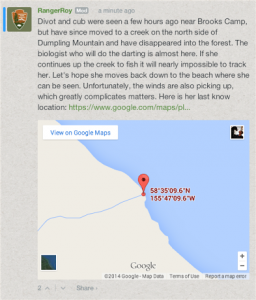 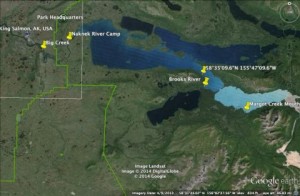 Update on Divot the Bear

From the Bear Cam Rangers in Katmai National Park:

Earlier today, many of you saw the sow with a single cub at the Lower River. That is believed to have been Divot, 854, now with only one cub. That alone would be news, but it also appears that she has been caught in a wolf snare, broken free, but still has the snare around her neck. From the photos we have, it looks as if it has cut into her neck. Our plan is to attempt to tranquilize her on Tuesday and remove the snare. This is a long shot, as she has not been routinely seen this year and we may not even be able to locate her. Perhaps with fewer Brooks Camp visitors and a fair number of salmon around she will linger just a while longer. Keep your fingers crossed.

*Update at 2pm PST: Divot’s Last Known Location – see photo above. From Ranger Roy, “Divot and cub were seen a few hours ago near Brooks Camp, but have since moved to the creek on the north side of Dumping Mountain and have disappeared into the forest. The biologist who will do the darting is almost here. If she continues up the creek to fish it will nearly be impossible to track her. let’s hope she moves back down to the beach where she can be seen. Unfortunately, the winds are also picking up, which greatly complicates matters.

*Update at 7pm PST: From Ranger Jeanne, “Here is a map [see above] that depicts the locations where 854 Divot was seen. On July 12, I took photos of 854 Divot on the Brooks River. On July 24, bearcam viewer CalliopeJane took a photo of 854 Divot somewhere between Big Creek and Naknek River Camp. I do not have the exact GPS coordinates of the location where CalliopeJane took the photo. The GPS point on the map marks Divot’s location earlier today. When she was first seen this morning, she was on the road moving in the direction of the Brooks Falls trailhead. She traveled down Brooks River, onto the gravel bar, on the beach to Mortuary Point and around the north shore of Dumpling Mountain in just a few hours. The last I heard from Ranger Mike around noon today, she had gone into the woods near the GPS point. Hopefully Rangers Roy and Mike will have an update later tonight.”

*Update at 7:30 pm PST: From Ranger Roy, “Hello all: We are back, and despite seeing Divot and cub briefly, we were unsuccessful at tranquilizing her. Here is what happened:

This morning, Divot and cubs were seen at about 8:30am at Lake Brooks, Rangers began following her on foot and continue dot do so until she reached Dumpling Creek.

She and her cub were last seen fishing Dumpling Creek around 11:00am, and then disappeared up the creek.

Around 1:30, we arrived on scene with the biologist that is licensed to administer tranquilizers. We did a sweep of the heavily forested and steep terrain, and while we saw recent evidence of bear activity, we saw neither of them. We returned to the boats and waited. One boat patrolled the lakeshore looking for her, the other waited where she was last seen. After about 90 minutes, we were preparing to leave and we saw her a few hundred yards down the beach. She rapidly closed the distance faster than we could prepare for the shot and she went right up the creek again. Even if we had been ready we may not have taken the shot because having her head back of the creek again while tranquilized would have made it difficult for us to deal with her and locate her. The park plane was in the area and flew the creek and observed that she continued up the creek. We waited for her return, but had to call it off because after tranquilizing a bear, it takes about 4 hours for them to be fully in control again, and it would have put us out there after dark. We will continue looking for her early Wednesday morning around camp, and will also go back to her little salmon fishing paradise, too.

I was unable to read too far into the thousands of comments, but I get the idea that some have speculated that we have received resistance from above. That is absolutely false. We requested assistance from our regional office and received it within minutes. The perceived delay was not because of red tape, it was purely logistical–Nothing happens fast in bush Alaska. We did not have to get permission from anyone to address the issue, we simply had to locate people with the necessary skills and equipment and then transport them to one of the most remote places on earth, hence the 24hr delay.

The wire that is around her neck may be a snare, or it may be something else. We won’t know for sure until we remove it. Trapping is not allowed in the park, but this sow and cub are easily capable of traveling outside the park in a few days. There is currently no reason to jump to the conclusion that there is poaching in the park. If it is indeed a snare, it may have been accidentally left behind last winter. Trapping is generally done for furs, and this is the wrong season for that. Too much shedding going on.

I will probably edit this again, but I wanted to get an update to you all as soon as possible. Please do not assume that something nefarious is going on when we are silent. We had 8 people on the ground and three in a plane looking for her. All who have been involved in attempting this rescue have Divot’s best interest at heart at all times.”

*Update 7/30 at 10am PST: From Ranger Roy, “Divot was just spotted and we are off to try again. It may be hours before my next update, so please be patient and try not to get sucked into too much speculation. I will give you a full report upon my return.”

*Update 7/30 at 7pm PST: Today, rangers and biologist tranquilized and treated a female bear with a wire snare tightly wound around her neck. The snare was removed and an iodine-like liquid (betadine) was applied to her wound. Look for a live chat with Ranger Roy and Mike about this situation later this week, or join the discussion now in the comments stream on the #bearcam.

← Bear Art
Pandas Having an Impact →