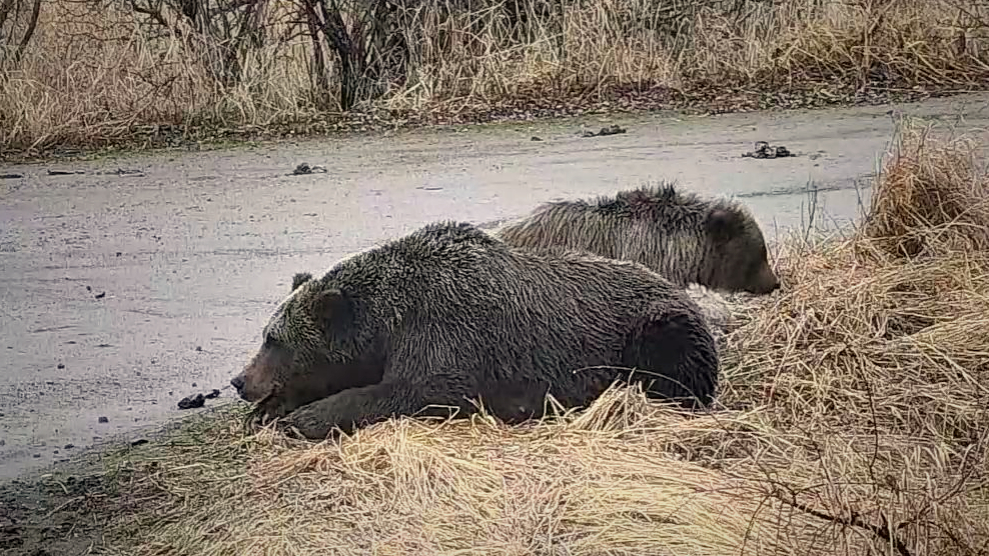 A cub lays between mom #451 and sibling

Ranger Mike on the Emotion and Resiliency of Bears

Since last night viewers have tuned in to the young cub of mother bear 451 on the Katmai River Watch Cam. We don’t know much yet, but it would appear the cub stumbled and seized, and now has labored breathing, laying on the road side. Mother and sibling have intermittently joined to rest next to the cub. Katmai’s Ranger Mike Fitz has posted some words in the comments section and in a previous blog post we’d like to share with you.

“Like many of you, Ranger Jeanne, Ranger Roy and I have been watching 451 and her cubs since yesterday. We have no way of knowing at this time what is impairing the cub’s mobility.

“Instead of focusing on possible causes of injury or illness, just for a moment, I’d like to explore the idea behind emotion in animals. Many people in the chat below have commented on 451 and how she appears to be ‘grieving.’ She left the cub several times, only to return. She sits and rests patiently beside it. Is that grief, or is her behavior since yesterday more readily explained by nurturing and maternal instincts?

“Humans evolved emotions long ago, so to me it is logical to conclude that other mammals experience emotion too. After all, we are share a common ancestry. Quantifying those emotions is not really possible though. After all, how would you measure love or anger? We all know what those emotions are, but think about how difficult it is to describe them. Wild mammals, especially intelligent ones like bears, may experience emotion. Again, I think it is logical to conclude some do on some level, but we will probably never know how this affects their behavior. Parental instinct is powerful in bears, like it is in humans.”

What is the policy in these situations? Ranger Mike tells us, “National parks like Katmai protect the beauty of nature and its harsh realities. Park rangers and biologists will not intervene to help an injured animal. ‘Bears injured naturally will not be tranquilized for veterinary care’ (Katmai National Park Bear-Human Conflict Management Plan, 2006).  Injured bears will also not be euthanized unless they pose an imminent threat to human safety. ”

However, and we don’t know the specifics of 451’s cub, bears are very tough and resilient. Ranger Mike provides three great examples of injured bears who faced death but went on to live, perhaps with modifications to body or behavior.

We thank everyone for their kind words during this difficult time, and for sharing this experience with each other, as painful as it is. We, like you, hope for the best.

← An Update on the Twins of Freedom
Polar Bear Week Snapshot Contest! →