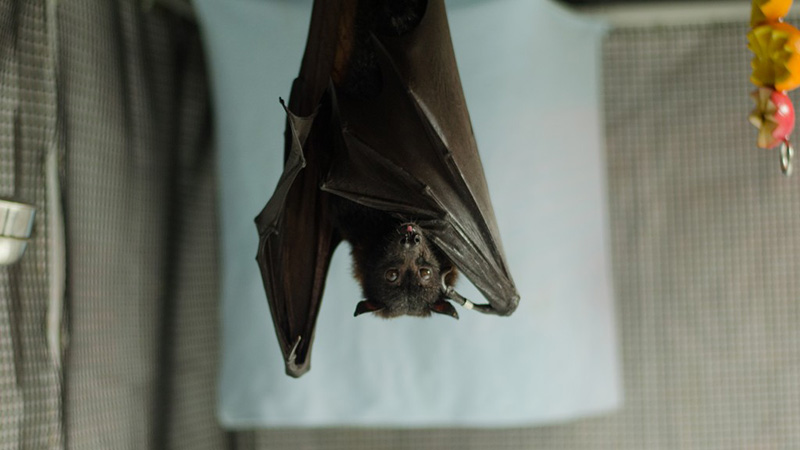 Fruit-eating bats live all across the warmer parts of the world, especially in the rainforests of South America, Asia, Africa, and Australia. They range in size from some truly tiny bats, that weigh less than twenty grams, to the Malayan Flying Fox, the largest species of bat in the world. But even the Malayan Flying Fox, with its impressive five-to-six-foot wingspan, still only weighs less than three pounds—any more than that and they could have some serious trouble flying!

Just as they show such diversity in their size, so too do fruit bats vary in their habits. They might live in caves or in trees; they might slowly eat a whole fruit or tear a chunk off and fly away to eat it later; they might use echolocation to navigate through their habitat, or they might rely on good vision and an excellent sense of smell instead. This diversity is part of what allows them to live in so many different areas around the world.

Fruit bats are also very important for the habitats in which they live. They are responsible for spreading the seeds of many different fruits, indirectly planting new fruit trees. These fruit bats will spit out the seeds of fruit as they eat, allowing the seeds from one tree to travel great distances in the mouth of a bat before landing somewhere new. Many bats can also be very important pollinators, transferring pollen from one flower to another in a way that allows the plants to reproduce.

Unfortunately, many of these fruit bats are facing a variety of threats. Deforestation deprives these bats of their homes. As rainforests shrink around the globe, the numbers of fruit bats and other tropical animals are shrinking as well. Additionally, fear and a lack of information about bats, in general, is a major problem, as many people don’t understand the important roles that bats play in environments around the world.

On this camera, located at the Organization for Bat Conservation’s facility in southeast Michigan, you will see three different types of fruit bat: Egyptian fruit bats, Straw-colored fruit bats, and one Malayan flying fox (she’s the big one!). We at the Organization for Bat Conservation hope you enjoy watching and learning about these amazing animals as they interact with each other and the world around them.