Keep Jumping Salmon, You Can Do It

Motivated by an overwhelming genetic urge to reproduce, hundreds of thousands of salmon overcome Brooks Falls to reach their spawning site. On bear cam, while we watch their repeated leaps, salmon demonstrate great determination and persistence. To reach their spawning grounds, they’ll try, try, and try some more.

On the underwater cam, we see salmon schooling in large groups before they sprint upstream to the Brooks Falls and possibly beyond. At six to eight feet high, Brooks Falls poses a considerable barrier to their migration, even in the absence of bears.

Relatively few salmon seem to leap successfully. The majority of their leaps look futile—poorly timed and inaccurate. By comparing the overall number of jumping salmon with the number of successfully jumping salmon, their relative success rate can be calculated. From 2013 to 2016, I counted salmon jumping at Brooks Falls for one-minute intervals. I (sometimes with a helper) counted the number of fish jumping and the number of fish who successfully made the leap over the same time span. During 463 minutes of counting, 16,277 fish jumped, while 1,068 salmon succeeded in their attempt to reach the top of the falls. This equals a success rate of 6.56 percent.

If you want to leap the falls, then you have to try, try, and try again. The low jumping success rate indicates Brooks Falls is a serious physical challenge for salmon. It is a barrier unlike any of these fish have ever encountered before, forcing them to attempt the jump multiple times before they are successful. Despite the low rate of success, several hundred thousand fish surmount Brooks Falls in a typical year. 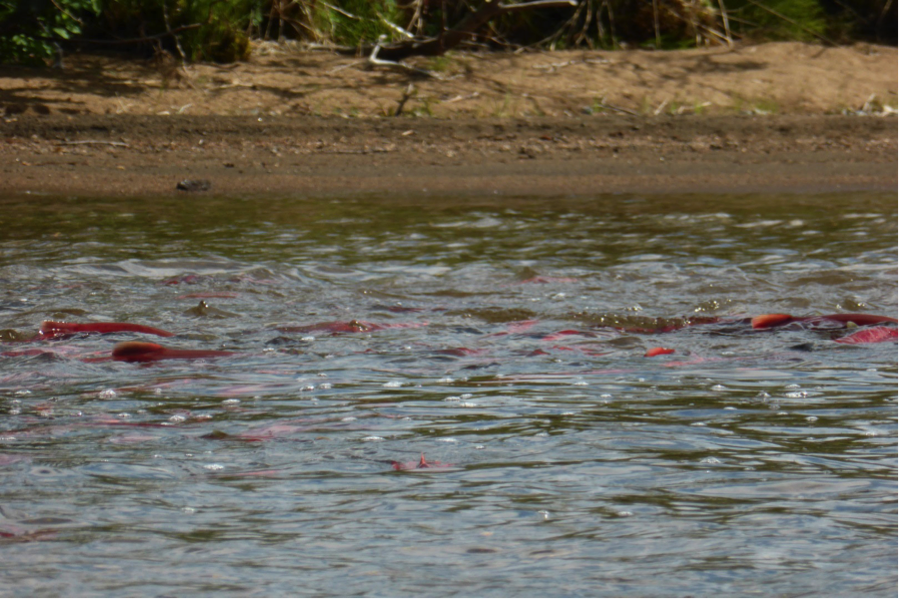 Late in the summer, many salmon spawn below the falls and in the riffles just downstream. These fish are not inferior to those upstream of the waterfall, however. The vast majority of salmon return to the same stream and even the same area in the stream where they were born. While fish who are too weak to leap Brooks Falls may be forced to spawn downstream of the waterfall, the majority of salmon spawning there may never attempt the jump at all, because they have no need to do so. That’s where they were born and that’s where they’ll spawn and die.

Bears may steal the show on bearcam, but salmon can be equally impressive. At Brooks River, salmon navigate a gauntlet of predators and surmount a challenging waterfall to reach their spawning grounds. Strong, unwavering genetic instincts drive them upstream to spawn and die. The dogged effort demonstrates their determination and persistence in the face of challenge.