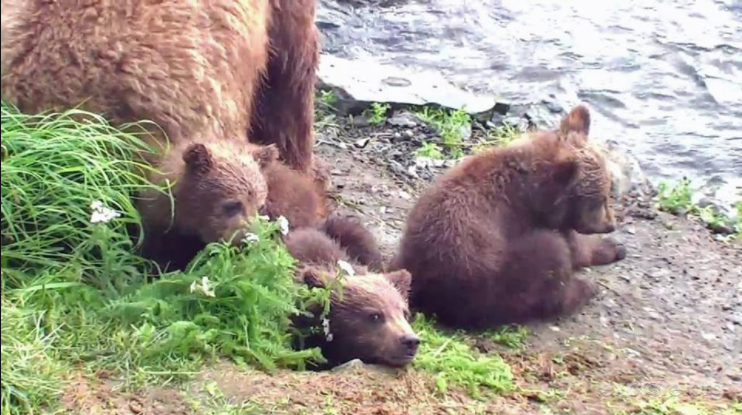 “It was July 25, 2013… my first season volunteering on the bear cams. I had been on the Service Dog Project cameras for four months and now here I was at Katmai where I had already fallen in love with Beadnose and her cubs.

This morning though, Brooke and her three spring cubs were walking along the path at the Falls and ended up on the platform above the fish ladder. They were SO tiny and the bushes gave them a perfect place to hide while their mother walked out on the lip to catch some fish. I saw one of the little cubs start to follow her and my hand started to shake on the camera controls and I officially stopped breathing.  And then… in a flash… over he went… quickly followed by a sibling.  I knew there were BIG male bears right by the jacuzzi and I was sure that they would kill the cubs.

One of the massive males was already halfway to the first cub when Brooke flew down from the lip (as the third cub simultaneously slipped off the ledge and slid down into the water with the others). She charged the approaching bear and stood her ground while the cubs made it safely to shore.

I started breathing again. But my hands didn’t stop shaking for another two hours.

I’ve considered #503 my own special bear ever since that day. He’s the only remaining cub from that season and we all know the challenges he’s faced and survived since then. I’m pretty sure he’s the one in the middle of this photo looking out at me saying: “Watch me! I’m going to continue to amaze you.”” – CamOp Kat