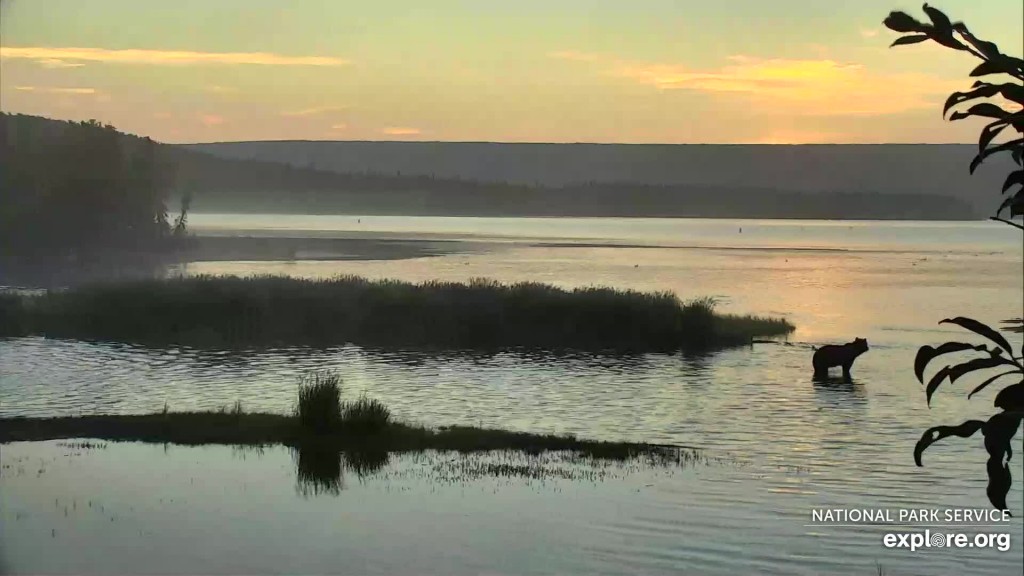 Hi and welcome to our weekly Bear Cam blog. We will be publishing this blog every week with a review of the previous weeks Bear Cam highlights. Brought to you by your bear cam Mods, LaniH and GABear. This weeks highlight video can be viewed here. (as a note the dominance fight was between 747 and 68, we did not know for sure who the bear was when the highlights were pulled)

The first order of business for this issue is to let you know (in case you somehow missed the celebration and cheering) that The Bear, The Myth, The Legend – Sir Otis (480) has once again returned to the Brooks River!  Otis is an older bear, whose easy-going demeanor and patient fishing techniques have endeared him to viewers. His look, with the crooked ear helps too. 🙂 He’s been spending a lot of time in his satellite office in the Riffles so far instead of his usual office at the falls.  He has been to the falls area and had successful sessions in the Jacuzzi when the more dominant bears aren’t in there. Otis was first spotted on cam out by the oxbow slowly scanning the river for salmon and making his way up to the falls. The riffles cam was the next to see him, sitting and taking a break from the long walk up the river. He stayed in the riffles fishing before walking towards the falls only to exit along the far bank and head into the woods. 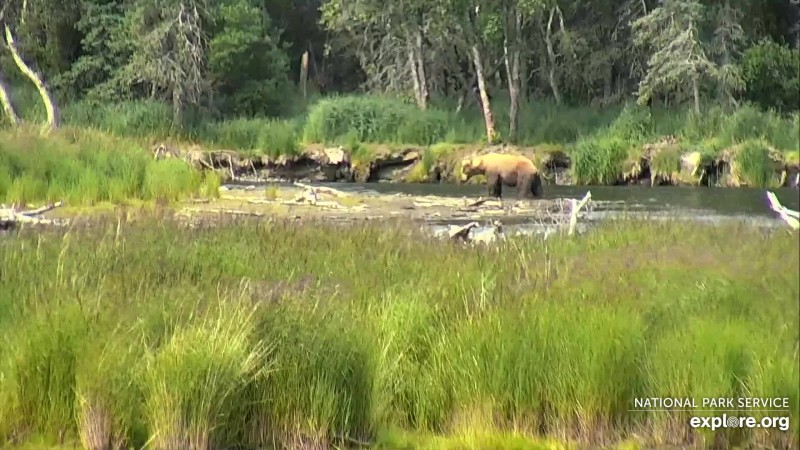 Later that evening 480 Otis was finally spotted in his office 😉 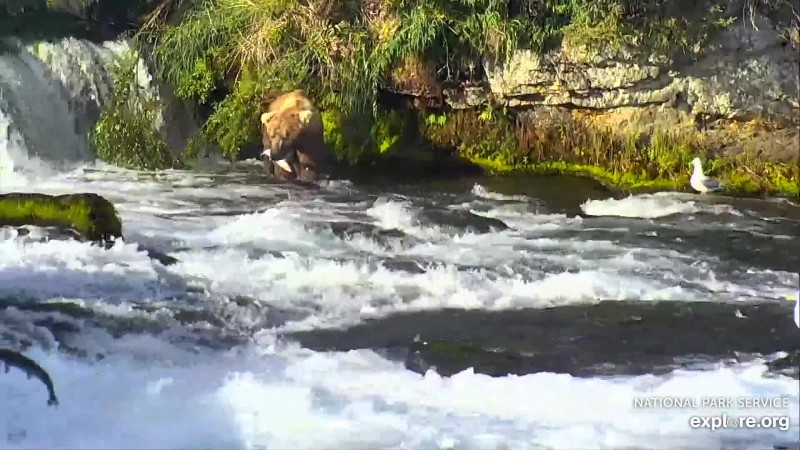 Another fan favorite, 775 Lefty also has returned.  In true Lefty style he came into cam view exuberantly jumping and pouncing around the falls area in an attempt to grab a fish.  He’s also been seen fishing the lip – but so far hasn’t decided to show us his signature leap off the lip into the Jacuzzi. 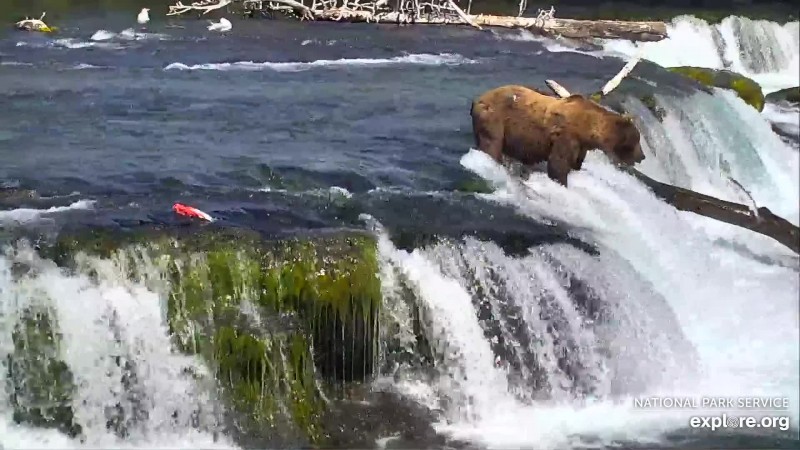 755 Scare D Bear was also seen fishing the lip, with success! We don’t see this often as 755 is more wary of humans than some bears and usually remains toward the far side of the falls area, only venturing toward the viewing platform side when it is empty of humans. This is why the viewing platform at the falls is closed for visitors from 10pm to 7am AK, to give bears that aren’t as human habituated a chance to fish areas closer to the platform. 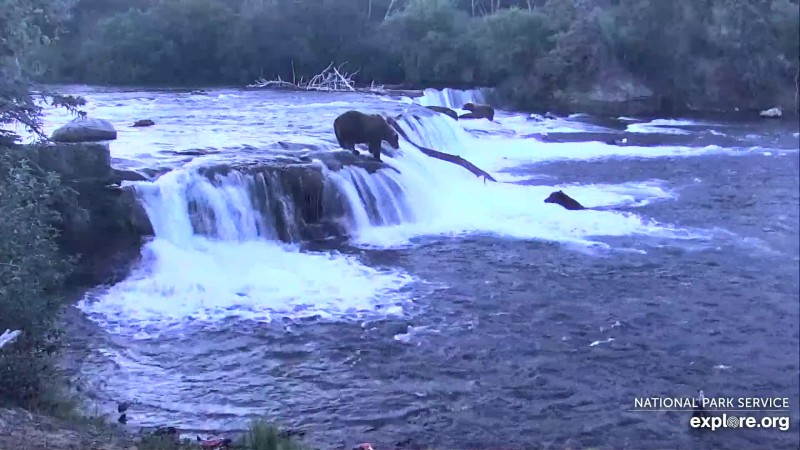 In more news from the lip of the falls, sows and cubs have been making good use of the abundant fish availability there.  813 and her two yearlings visited the lip. While there one of the yearlings slipped and experienced the water slide to the base of the lip.  As usual when this happens the cub was fine, popping up and swimming to shore. 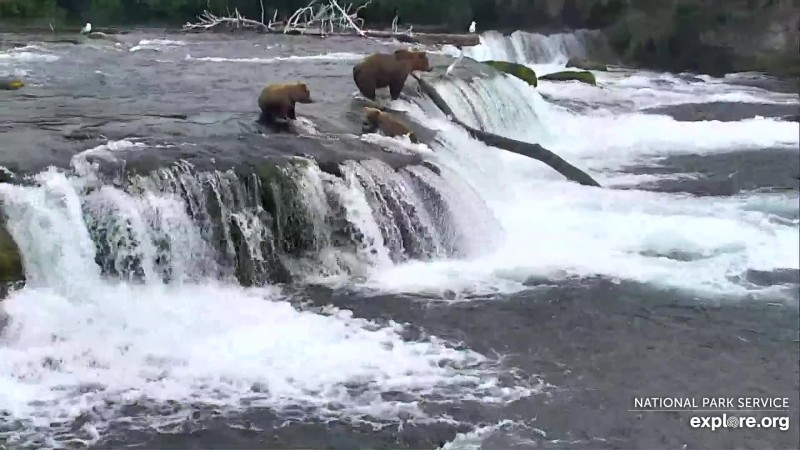 As is a normal practice, 402 and her three yearlings have also spent time on the lip.  They’ve had good success there with even the cubs able to grab scraps and eat them in the rush of the water.  These cubs managed to remain securely on the lip. 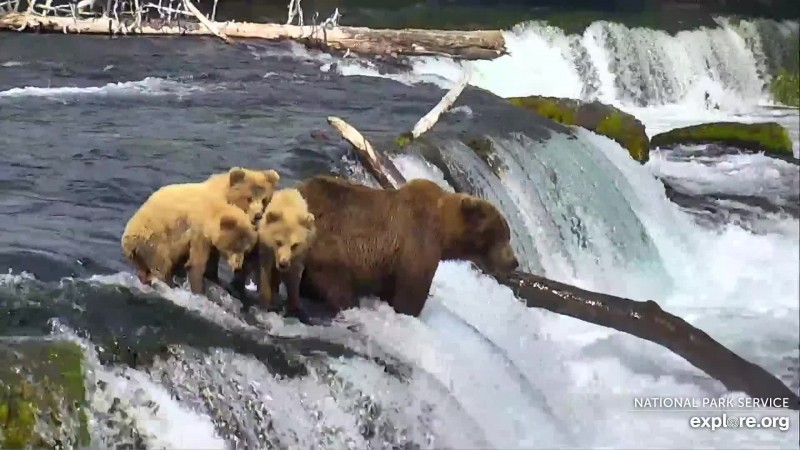 A subadult was seen at the falls trying out an unusual way to fish the jacuzzi. Instead of getting into the plunge pool which surely would have pushed the subadult back out, this enterprising bear thought fishing right on the edge of the jacuzzi would be a good way to catch the fish jumping. Surprisingly this subadult was able to catch a fish this way much to the delight of viewers. This week has given viewers some wonderful, fun views of cubs.  Cubs playing, sleeping, nursing, and playing some more. Even subadults got into the action playing at the falls and lower river areas. 94 was seen nursing her cubs and her cubs entertained us with several cute play sessions. 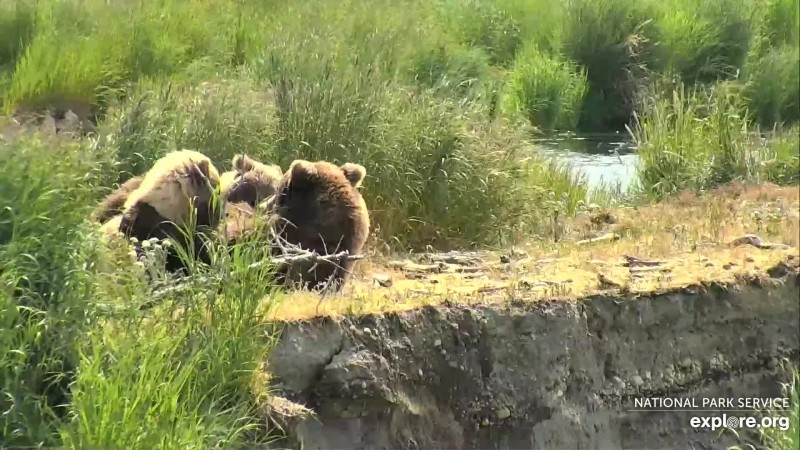 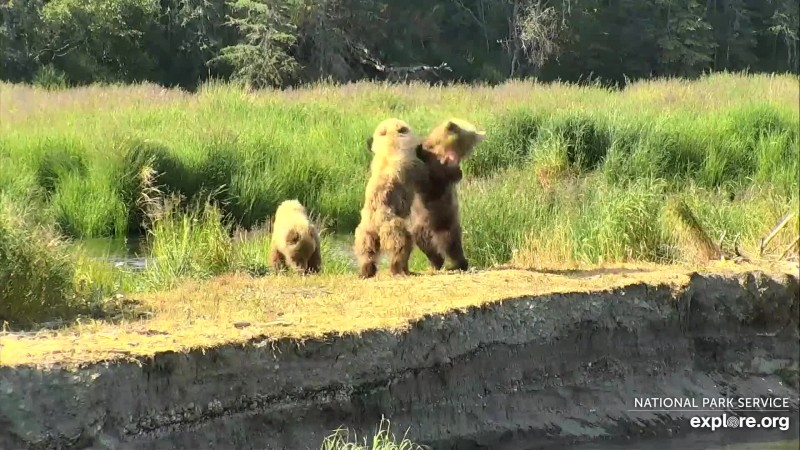 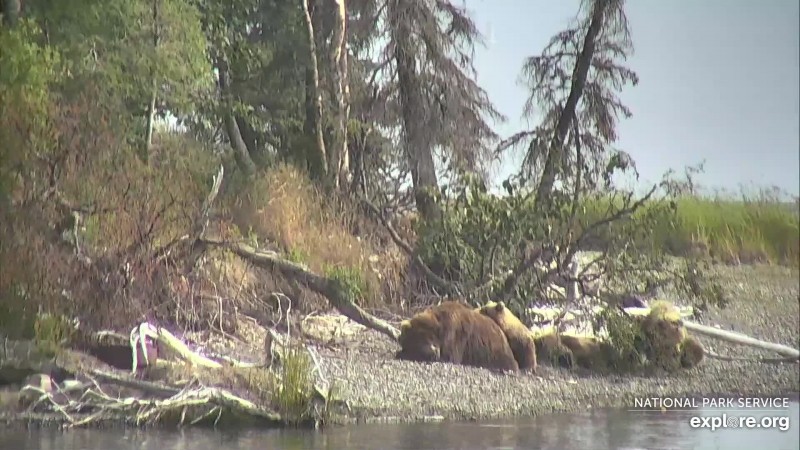 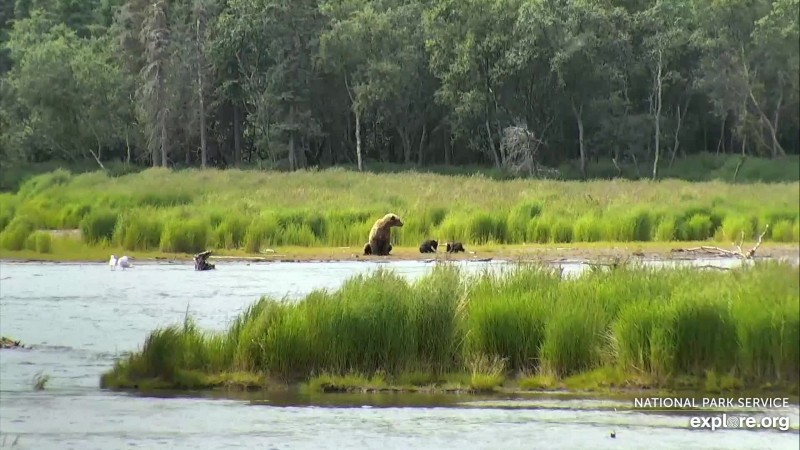 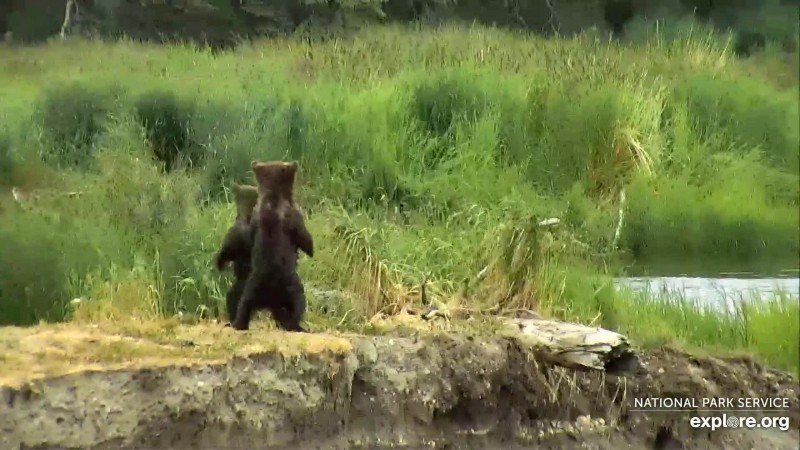 Even the adult bears indulged in a little playing – or maybe this was a little romancing? – as we saw 32 Chunk and 854 Divot playing in the lower river area. This play/courting session lasted for quite some time along the river and under the bridge. 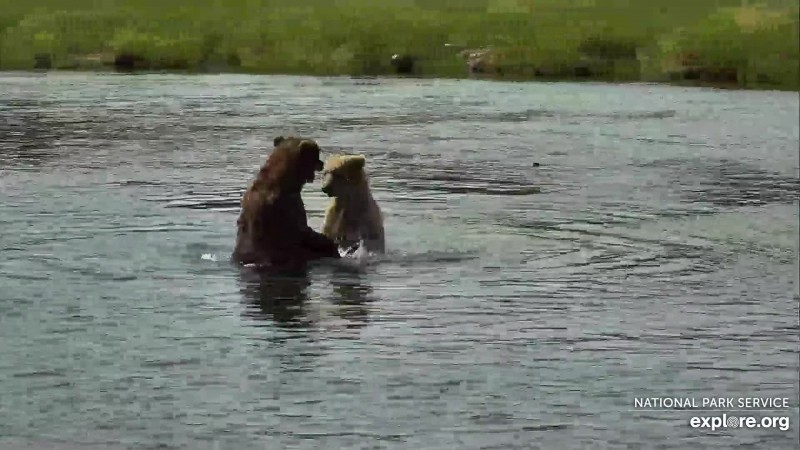 813 and her two yearlings showed us some interesting and unusual behavior.  She and the cubs went up a tree near the falls area one night and remained there for several hours.  We didn’t observe the reason they did this or why they remained so long, but eventually they all got down safely and went on their way. 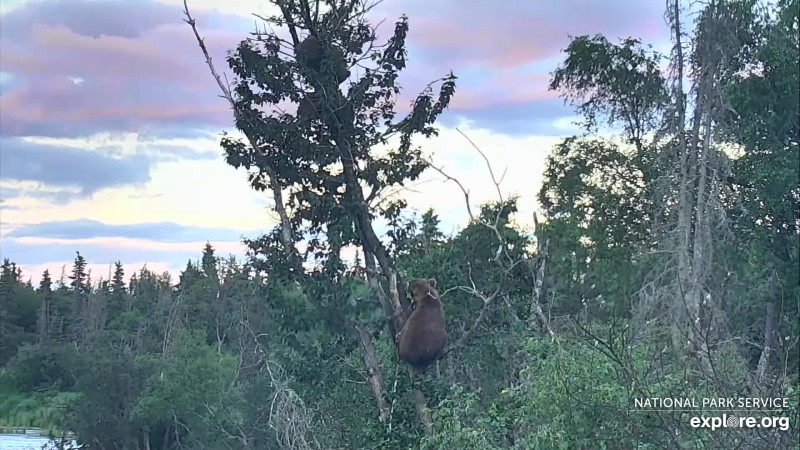 One of 813’s cubs seems quite zealous in making sure that no one can steal its fish.  It climbed a tree with its prized meal to be sure to eat without interruption. 813 Nostril Bear was seen Friday at the falls slowly sneaking behind 747 who was in the jacuzzi. She reached into the jacuzzi with her paw to pull out some scraps 747 had discarded. She then ran under the platform to eat them with her cubs 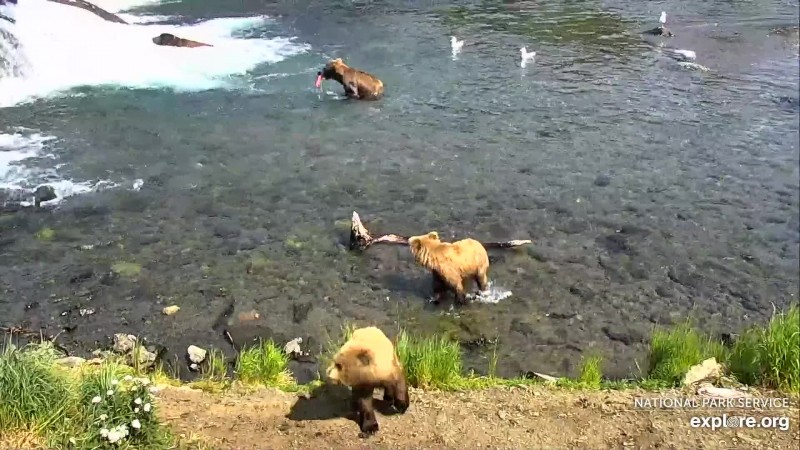 856 got a lot of attention this week.  He was the subject of the weekly Bears of Brooks River video series.  And he gave us quite a display of the amount of effort a dominant bear will expend pursuing the female of his choice.  He was in view of the falls cam one evening as 854 Divot led him on quite a long meandering path through and around the falls area.  Divot gave him the slip on the far side of the falls near the Office area. 856 nearly fell off the tree or shrub into the falls trying to figure out if Divot was hiding there. On July 2, during a live Play by Play broadcast with Mike Fitz narrating the bear activity at the falls, we witnessed a major fight brought on by the dominant behavior of bear 747.  Bear 68 refused to yield to 747’s dominance displays and the two of them fought. Mike’s blog describes the intense battle and includes a video. We are seeing amazing numbers of sockeye salmon moving through the Brooks River both from observations on the underwater cam, to so many fish jumping at the falls it’s almost impossible to try to count them.  The Alaska Department of Fish and Game does count the escapement into Naknek River. In 2018 on July 3, the cumulative number was 490,062. This year on the same date that number was 614,058. We’re told that about 20% of that amount may make their way to Brooks River.  No bears are going hungry this year. Fishing seems to be good in all parts of the River. You can view daily fish counts here. We have also seen some wolves around Brooks river, both at the falls and lower river. Maybe as a foreshadowing of what was to come this week with the change in hierarchy as 68 is now the second most dominant male below 856. Mike Fitz and Ranger Naomi did a live chat on Bear Hierarchy & Dominance.