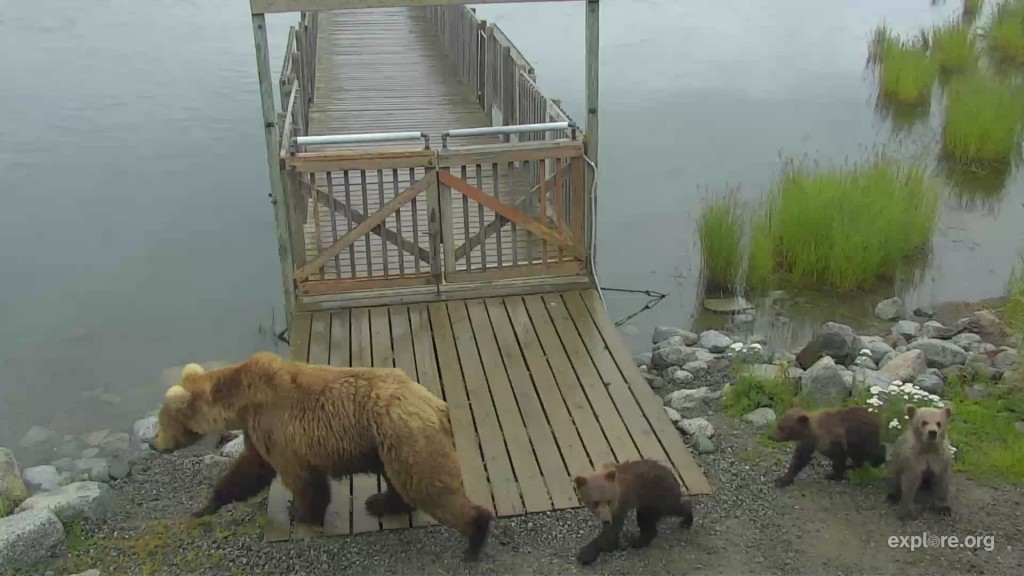 482 Brett and her three coy

Many cam viewers were wondering if any more sows with coy would show up to Brooks River. This past week they got their answer, as three different sows showed up with coy. 402 was seen late in the afternoon on July 13 with 4 coy. 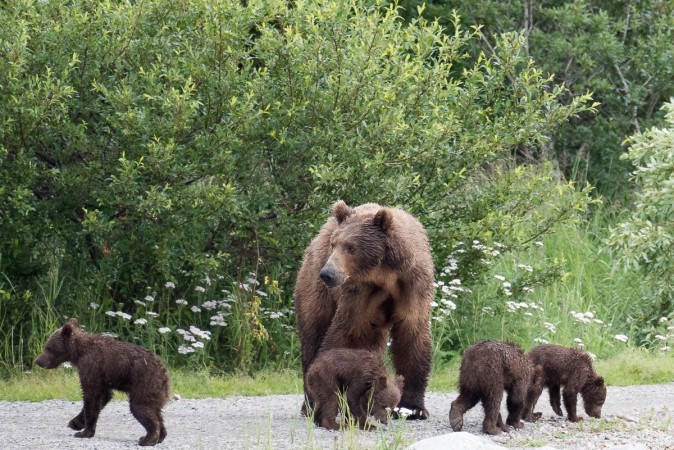 402 with 4 coy picture by Ranger Russ

From July 15 – July 19, 402 was reportedly seen with less than 4 cubs several times.  Once with only 2, then with 3. It’s a little uncertain whether she was missing a cub, if it was just lagging behind for a while, or if a different sow with only 3 cubs was thought to be 402.  On July 19, 402 was spotted by the cam out on the spit with all 4 of her coy! To say viewers were happy and relieved would be an understatement.

You can read about 402 and her coy here in a new blog by Mike Fitz. 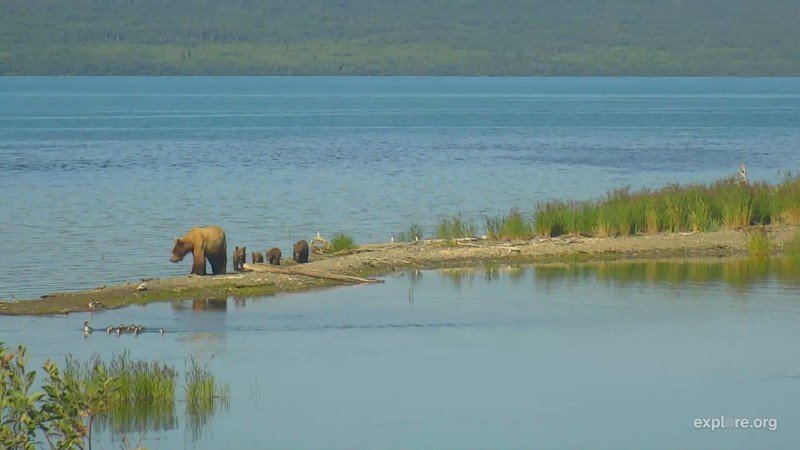 482 Brett and her three coy picture by Ranger Russ

Another sow with three coy was seen just once on cams, we have no official ID of this sow but hopefully the rangers will get to see her and we’ll find out who she might be, or she could be a new bear! 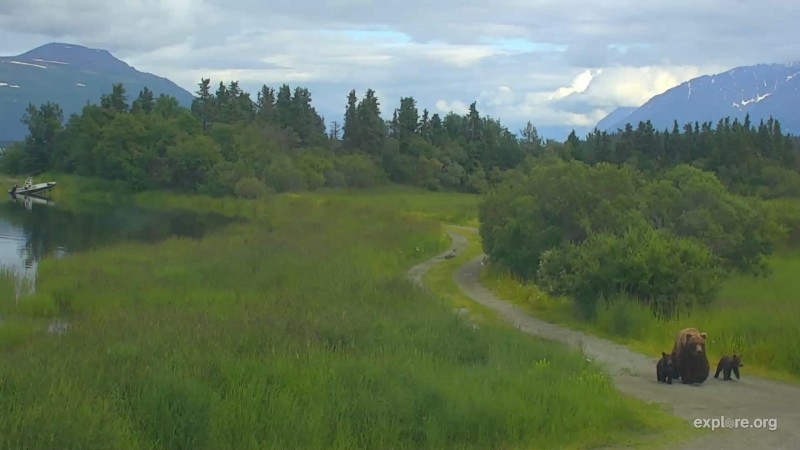 Along with the excitement of all the sows and coys running around, we have had a packed falls a number of nights this past week. Mike Fitz stated that on one night he saw 30 bears within eyesight of the falls, not counting cubs! 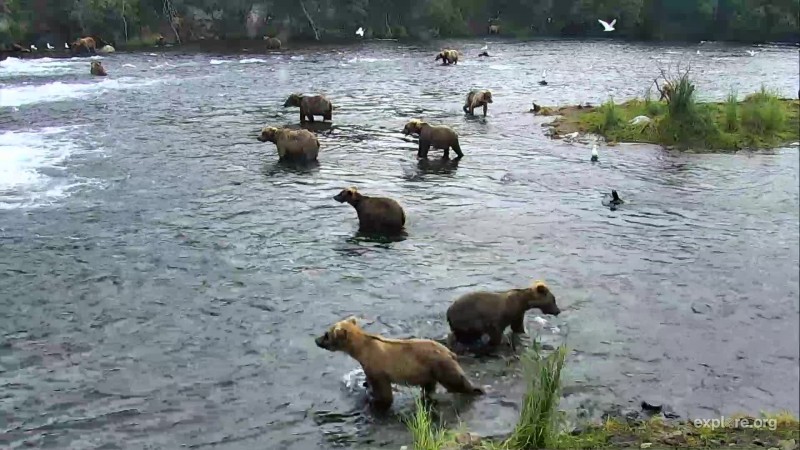 even more bears at the falls 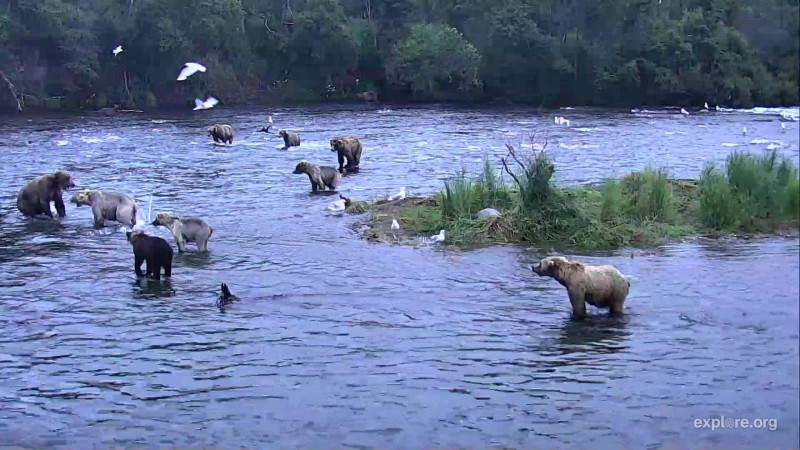 451 and her three yearling cubs have been seen at the falls quite frequently this past week. We have witnessed her pirate fish from several subadults. This is unusual for her, as she’s not one of the sows known to frequent the falls. Mike Fitz had this to say:

451 is a bear who has rarely visited Brooks Falls. In past years and much of this summer so far, we were much more likely to see here in other places along the river. She’s familiar with the river and its salmon, but fishing at the falls may be a skill she never developed. This might be why she’s more apt to scavenge/steal from other bears. Typically, the bears hovering on the fringes of the falls do so because they can’t compete for fishing spots at the falls, don’t know how to fish there, or find too much competition to fish. 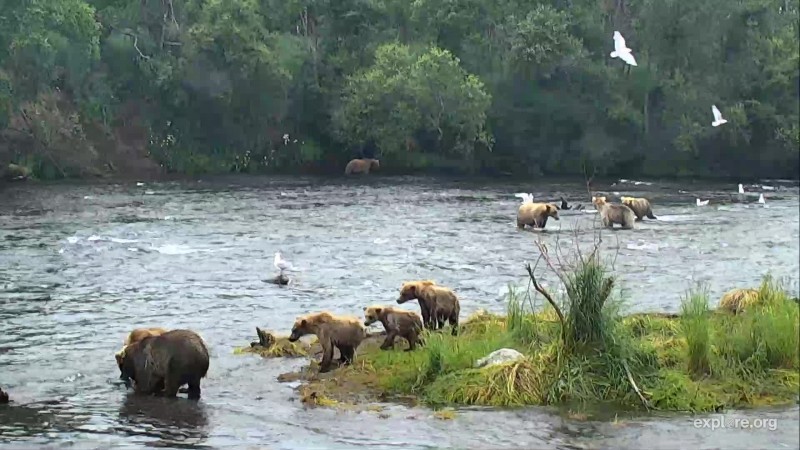 451 and her yearlings pirate a fish from a subadult

409 Beadnose is back in the groove as one of the best at catching fish on the lip of the falls. We’ve seen her make some pretty spectacular catches there. 775 Lefty has been the other regular on the lip. His technique can be a bit frantic looking sometimes as he bobs his head up and down with great enthusiasm in an effort to track and catch a fish.  As he becomes full, he also becomes less frantic and the head bobbing lessens. 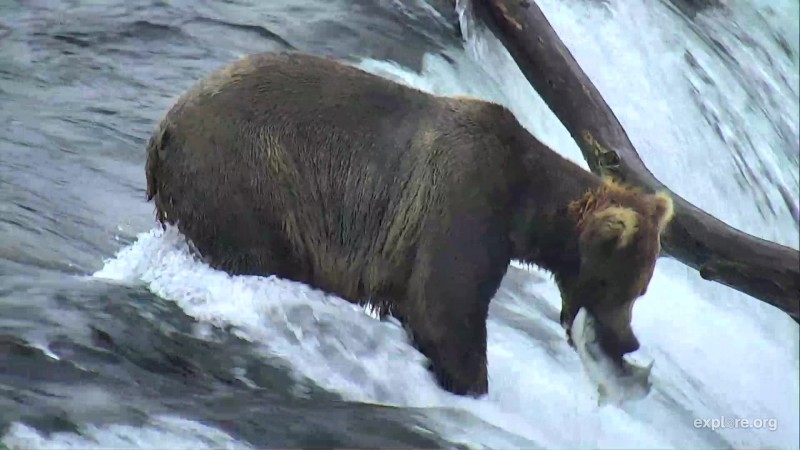 409 Beadnose with a great catch on the lip 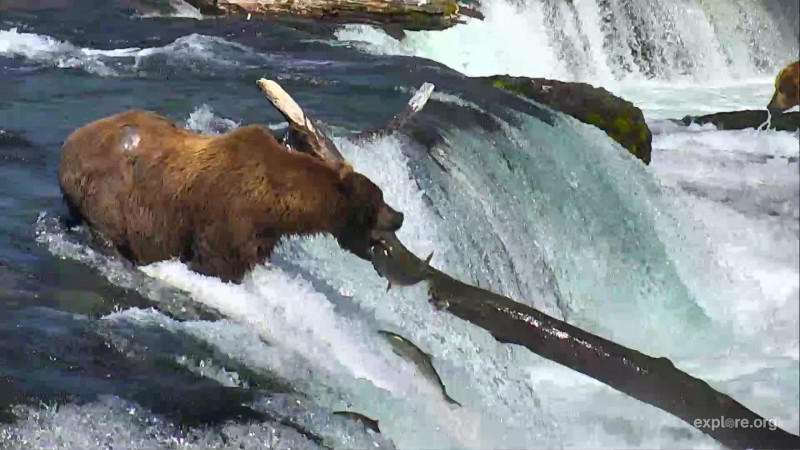 775 Lefty and the one that got away

One funny moment seen on cams this past week was bear 39 climbing up the log that is leaning against the front of the falls. No one was quite sure why she climbed out, other than to escape 747. He had just walked over to the side of the jacuzzi to eat a salmon. She figured 775 Lefty was much less of a threat than 747! 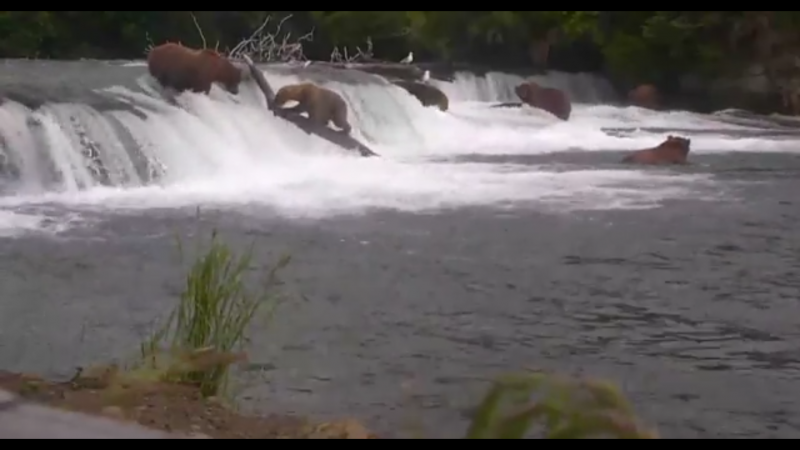 The dominant bear in the hierarchy still seems to be in question. The tall, lush vegetation on the little island is slowly being stomped down by various male bears cowboy walking through it.   Bear 856, who’s been dominant for many years until having an injury last year, was finally seen on cams Thursday morning after being absent most of the week. Most of the bears move out when they see 856 coming.  747 is busy asserting his dominance any time that 856 is out of sight. 32 Chunk, who showed a remarkable display of dominance toward 856 last week, stays out of 747’s way.  As do most of the other male bears, although some will hold their ground. 747’s efforts to sent mark are about to reduce the poor island tree to a pile of sticks. 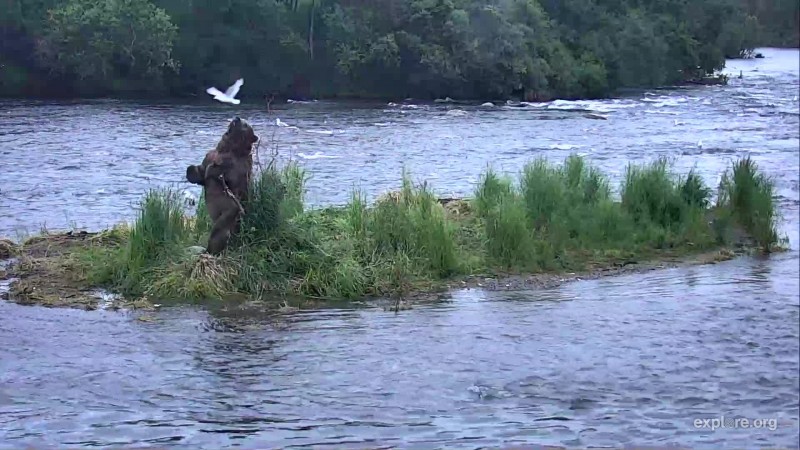 During July 20th comment chat Mike Fitz had this to say when asked about the 32 and 856 and the hierarchy:

856 was absent from the falls for several days, so we didn’t see him interact with 32. Last night though, I watched 856 directly approach 32. 32 sat down and watched 856, who eventually walked away. To me, this illustrated that 856 is more dominant than 32, since 32 didn’t attempt to rebuke the approach of 856.

The Under Water cam has continued to offer us great views.  Not only of the record numbers of salmon getting ready to head up to the falls, but also of swimming bears and even beavers!  132 and her coy were seen.  The beaver has made several appearances. We were also treated to an amazing close up of a salmon! 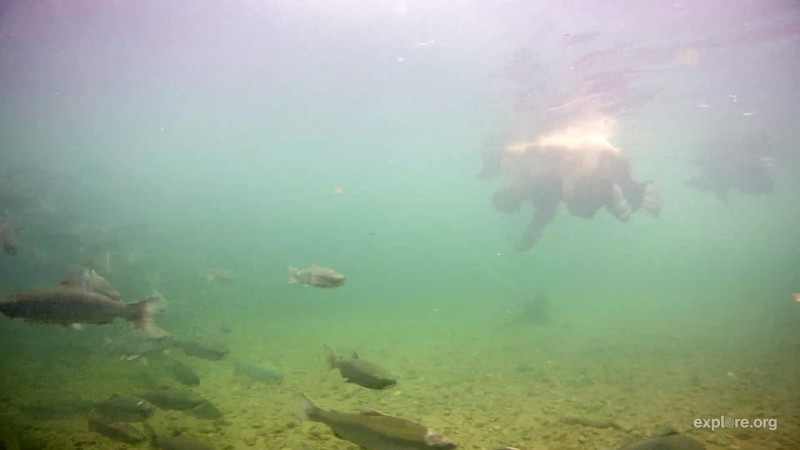 132 and her coy swimming by underwater cam 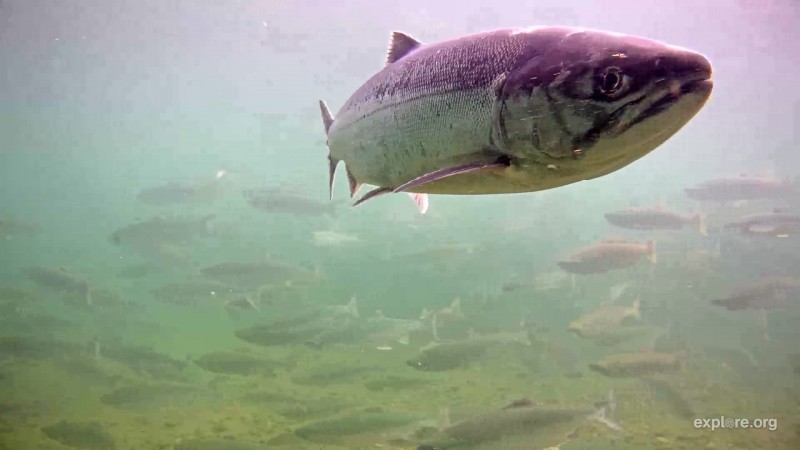 Close encounter with a salmon

Some sub adults are hanging out in the Lower River area and we’ve enjoyed seeing them running around and playing.  Some of them have taken up gardening and were seen working to trim some trees. 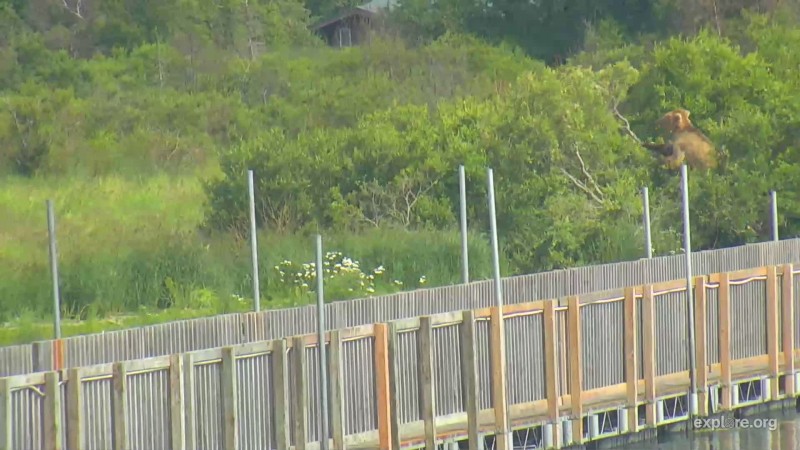 719 tree trimming near the bridge 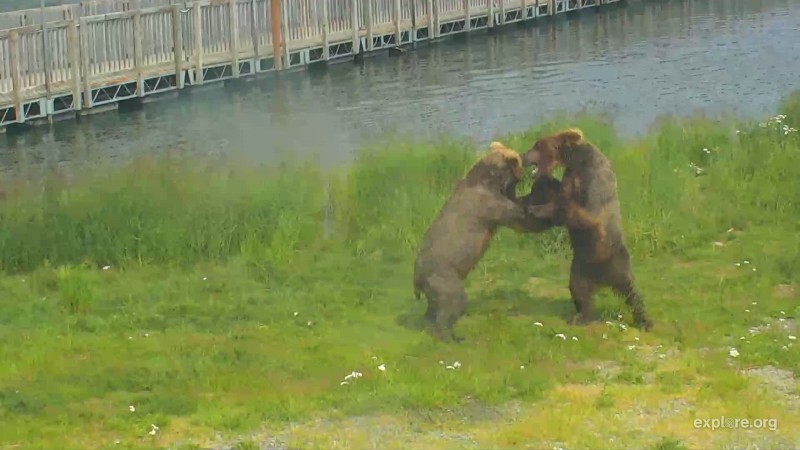 Late Wednesday night, cam viewers were treated to a rare sighting of a wolf at the falls, made all the more special by its close proximity to the camera! Maybe we will get lucky and see a wolf again, keep on the look out. 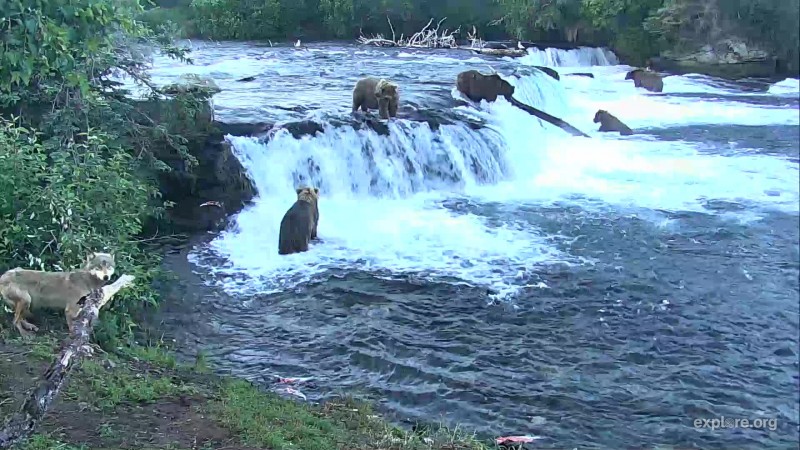 Wolf near the platform

On Thursday, we were treated to a beautiful close up of bear 477 Sara high grading some scraps on the shore in front of the viewing platform at the falls.  You can see her pearly white front claws. Bear claws come in a variety of shades, from dark brown, to beige. The pure white ones are not very common. Hers are gorgeous! 477 Sara and her white claws

We have decided to add a new feature to our blog, each week we will each pick our favorite moment from the week.

Watching 451’s yearling runt finally get a fish of its own after 5 minutes of seeing its much larger siblings and Mom eat two fish, leaving it no chance to enter the fray to get some.  The third time, the feisty little cub got right in there and fought 451 for the fish. Amazingly, Mom and sibs let it have the whole fish while getting back to more fishing. It worked hard trying to break through the skin and eat the fish and was last seen taking it “to go” when Mom and sibs moved on.  Great example of perseverance for the smaller cub! 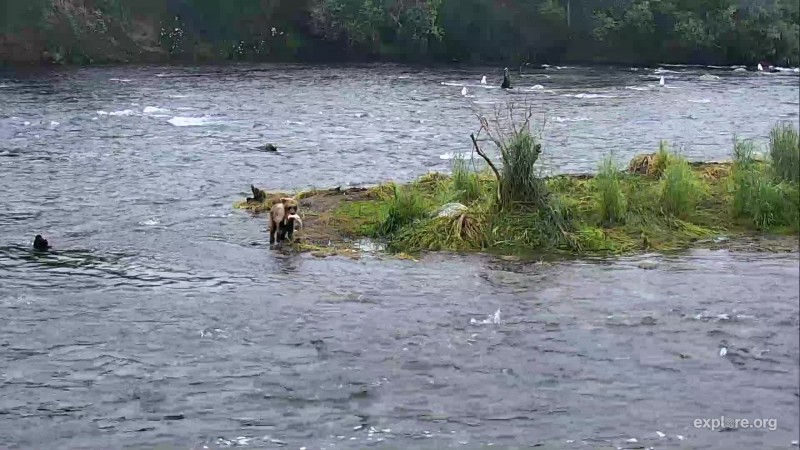 Seeing 755 Scare D Bear sleeping on the river bank was the best moment for me. I didn’t even see him sleeping there until the cam op zoomed in on him. He has a special place in my heart as he was the first bear I ever saw on cams. And the first one I could ID, mostly because he fished in the same spot on the rock wall, if he moved from that spot I couldn’t ID him. My first avatar pic was of 755. He looked so peaceful sleeping there in the sun, not necessarily comfortable. But it was a convenient spot to sleep so he could go right back to fishing. 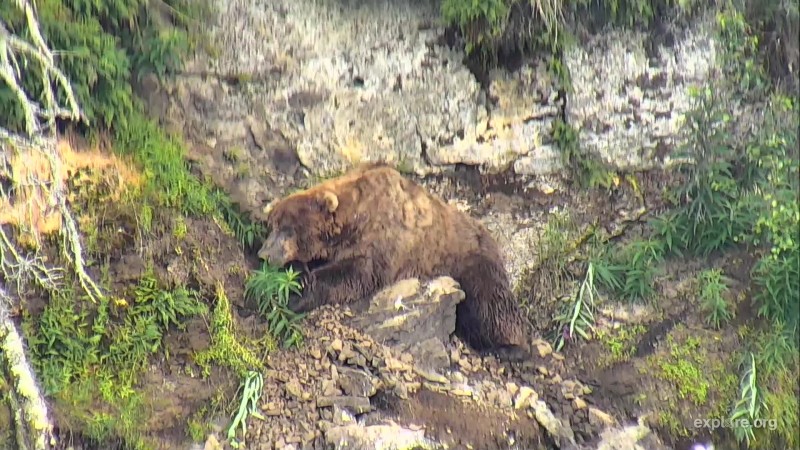 View this weeks highlight video of some of the weeks best moments here.

We had a live chat with wildlife biologist Leslie Skora and Mike Fitz, watch it here.

Rangers Andrew and Russ did a live chat about claws, paws, and teeth, it can be viewed here.

Mike Fitz has a new blog out, how does a bear family break up, read it here. 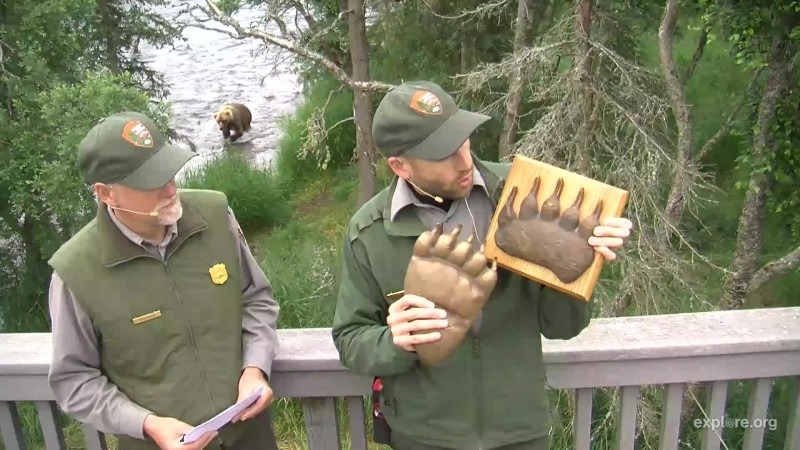 What will next week bring….only the bears know 🙂