How does a bear family breakup?

Through the Bearcam Question form Susan asks, “Have you seen bears ‘emancipate’ their cubs? How do they do it? Drive them away?”

I’ve witnessed a bear become emancipated from its mother just once, and at the time I didn’t realize what was happening. In late June 2014, bear 402 had a single yearling. By mid July though, 402 had separated from her cub and it was left to fend for itself. Much has been written about this saga before, so I’ll only focus on the separation process that I witnessed. It was likely a confusing event for the cub, who suddenly found himself alone at Brooks River among many other bears.

At the time, and until somewhat recently, I stated that 402 had “abandoned” her yearling (now known as 503). While this might be true in a sense, I no longer think that this is an accurate way of describing the event. After reading more about the emancipation process, I’ve come to believe 402 didn’t abandon her yearling in 2014. She emancipated him. 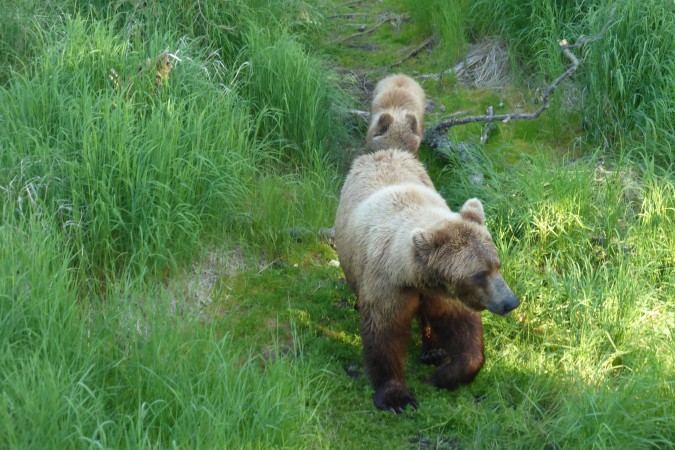 Family break-up in brown and black bears (emancipation of offspring) is triggered primarily by two factors. 1. The mother bear begins to enter her estrous cycle, making her receptive to mating. 2. Adult male bear(s) sense an opportunity to mate with the female. Generally female bears enter estrous in May and June. Mother bears may not necessarily become intolerant of their cubs when they enter estrous, so the cubs stick with mom as long as she allows, although there are reports of mother bears chasing their offspring away during family breakup. She’s probably not nursing them either, but older cubs are not reliant on mother’s milk for their nutritional and energetic needs. What gets the cubs’ attention though is the presence of an adult male who seems particularly interested in their mother.

At this time, again usually in May or early June, the mother bear may no longer react with much concern for the male’s approach. She may not flee the approaching male like she would’ve in the past, or even later in the summer. She may eventually allow the male to approach very closely as she enters the peak of her estrous cycle.

The cubs, on the other hand, see the situation differently. The large male bear is a physical threat to them, and they’d be wise to keep their distance. In this way, the cubs are prompted to leave the close proximity of their mother and begin to wander across the landscape alone, because mom no longer appears to be willing to defend them from the larger bear. This scenario has been described as male-instigated break up of a bear family and I think that’s what ultimately prompted 402 to separate from her yearling for good in 2014.

In July 2014, I noted bear 856 paying a lot of attention to 402, not in an aggressive manner though. It was more like he perceived she was in estrous. He began to follow her in order to have the opportunity to mate. This confused me at first as 402 was still caring for a yearling and mother bears in Katmai typically keep their cubs through their second or third summers. If they keep their offspring around until mid June, then it’s very likely those cubs are sticking with their moms for the rest of the year, and I had never seen a mother voluntarily separate from a yearling or emancipate a cub in July.

So 402’s separation from her yearling in July 2014 was odd because the yearling was a year younger than most emancipated offspring and it happened in early July, weeks later than normal for this event. The other parts of the scenario are typical though. 402 did indeed enter estrous. 856 courted her for over ten days before they copulated. His interest in 402 and 402’s lack of interest in her yearling prompted the emancipation.

This is just one example of family break-up in bears. For the cubs, no matter their age, family breakup may be a stressful and confusing event for them. For their whole lives until that point their mother has been their protector and provider. Within days, perhaps hours, that changes. At best she ignores them while hormonal changes direct her interests elsewhere. As the former family members go their separate ways, each begins a new chapter in their lives.

If you have other questions for explore.org’s bearcam fellow, Mike Fitz, or Katmai National Park rangers you can ask them at anytime by using the Bearcam Question form. They may answer your questions during a live chat, in a blog-post, or during their twice-weekly text chats in the comments in the Brooks River live chat channel.