The sight of spring cubs elicits an air of excitement. Baby animals in general, and spring cubs in particular, represent the promise of the future and their playfulness and curiosity remind us of our own childhood or children. Raising cubs though, isn’t an easy task. Cubs face considerable risk in their young lives and mother bears are challenged to raise and provide for their cubs until they are mature enough to survive on their own.

On July 13 one of Brooks River’s well-known bears, 402, arrived at the river mouth with four spring cubs. 402 is an experienced mother who has had six litters prior to 2018. Her fecundity is partly a result of her age (402 is about twenty years old and had her first litter as 6.5 year-old bear in 2004) and partly the result of a high turnover rate between some of her previous litters. For example, the loss of her entire 2007 litter stimulated her to enter estrous and mate. When she returned in 2008, she was caring for another litter of spring cubs. In 2014, she entered estrous and weaned a yearling cub (now known as 503). She then returned to Brooks River in July 2015 with four cubs.

402 can now apply years of experience and skill to help her current cubs reach independence. However, no mother bear at Brooks River is known to have successfully weaned four cubs from a single litter. 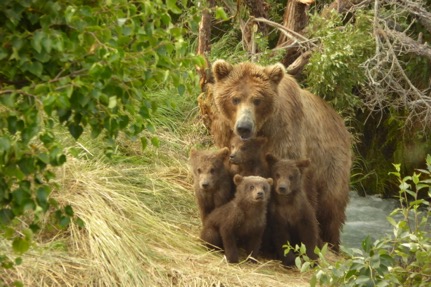 The risks to cubs are real. Protecting, teaching, and feeding cubs is a difficult task, one that is made even more so for 402 this time by her four-cub litter. Just recently, rangers reported “402…lost a cub, was reunited with it, then seen with two cubs, and most recently, back with three.” No matter this family’s fate, we can marvel at 402’s determination to follow her maternal instincts in an attempt raise another generation of Brooks River’s bears. 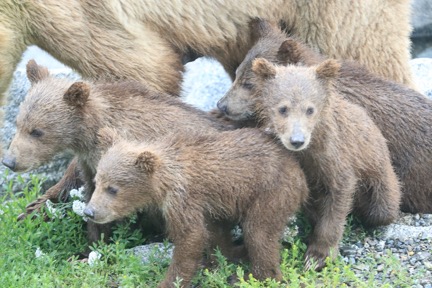