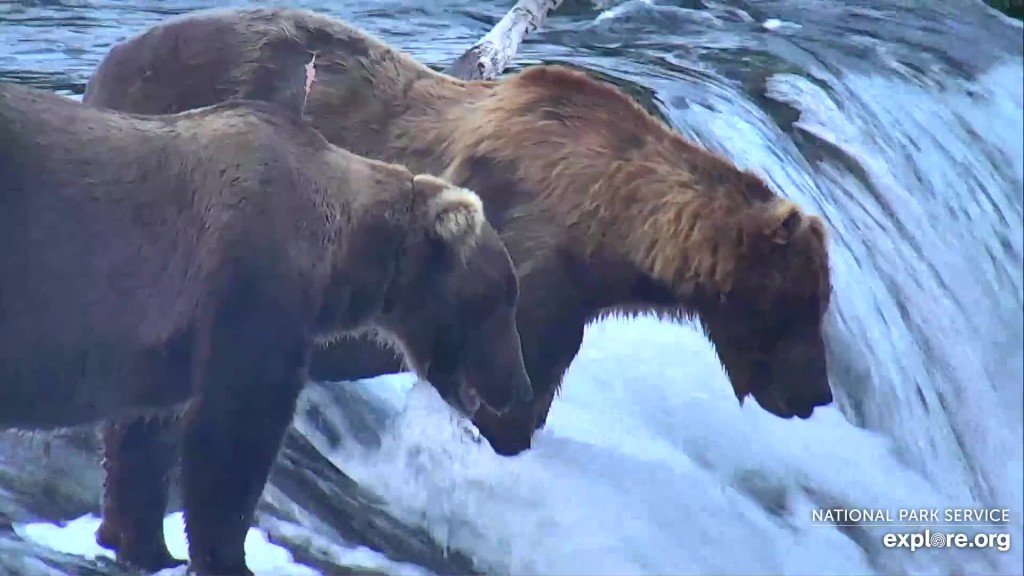 It’s August.  The time when, at Brooks River, the salmon and bear activity is expected to slow down.  The run has usually wound down, bears have followed the salmon to other creeks and streams and/or are feeding on berries…..  But wait – a look at the Falls cam shows lots of bears! Eight, nine, ten…Five more in the Riffles! Wow! What’s going on? A year ago, Mike Fitz wrote this blog about the unprecedented number of bears in the river at that time.  It seems we are seeing a repeat of that this year. Mike’s comment from Wednesday, August 7, 2019:

“The number of fish still jumping the waterfall is incredible for this time of year. Typically, the sockeye salmon migration wanes and ends in July. Sockeye remain in the river afterward, staging until they begin to spawn at the end of this month. Like 2018, however, it seems that the sockeye run just won’t end. I’m not sure why this year and last are different, but I suspect it is related to the very large runs in the Bristol Bay recently. The consequence for bears is that they’ll likely be very well fed. In fact, the current batch of bears at Brooks River appear very fat for this time of year, fatter than I have ever seen bears at this time of year.”

Lots of salmon jumping the falls Snapshot by LaniH

For bearcam viewers, this is great news!  We get to continue to watch and enjoy the bear activity. For 775 Lefty, this is also great news – he can continue his residency on the lip where he seems to never get full.  🙂

On Thursday morning, long time bearcam viewers got a surprise blast from the past when bear 469 made an appearance at the Falls. 469 is identifiable by a diamond shaped patch of light fur on his left shoulder.  Since 2013, this bear has been seen rarely, if at all, and often not within the cam view. Many were introduced to him in 2012 when he buried prey in a cache in view of the Lower River cam. At that time he was a bear seen on the Brooks River only in the fall.  In 2013 he appeared at the falls in the summer. He arrived unable to use one of his legs due to an unknown injury. He proved to be an amazingly resilient bear as he made it through the summer with this injury, found enough to eat and slowly recovered. This video talks about his injury and recovery. On Thursday 469, who is an older bear, looked great!  He was well fed and fairly fat. He seemed to want to confront other bears for a spot at the falls.  But he left after a brief time. We are hoping to see him again. 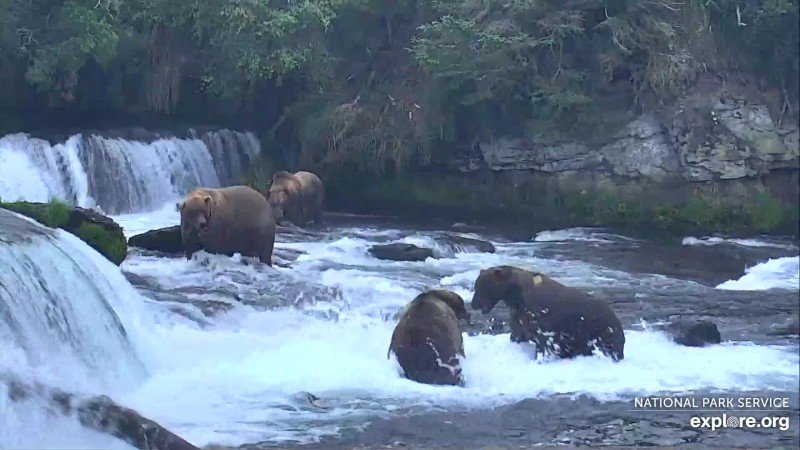 469 Patches has words with 89 Backpack Snapshot by mtnlovingal 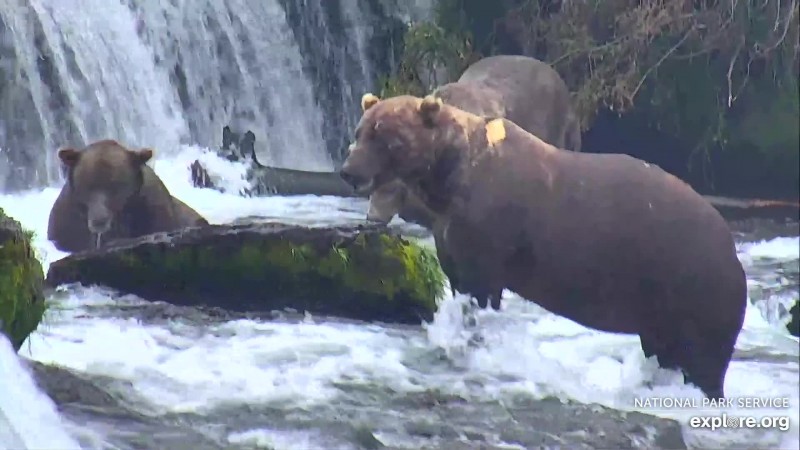 Bear #68 continues to show that he may be becoming one of the more dominant bears at the falls.  After his altercation with the #2 bear in the hierarchy, 747, earlier this season – in which he came out the winner – there have been several other encounters between him and 747 and also with the most dominant bear, 856.  While 68 doesn’t shy away from any of these encounters, he, as well as the other bears, currently seems reluctant to push these encounters to a fight. Mike Fitz had this to say:

“856 is still more dominant. He consistently challenges 68 and 68 doesn’t reciprocate or back 856 down. Instead, 68 tends to stand still until 856 breaks off the encounter. However, it’s clear that 68 is not as intimidated by 856 as other bears and is not necessarily likely to back down. I wonder if 68 will be able to displace 856 in the future.” 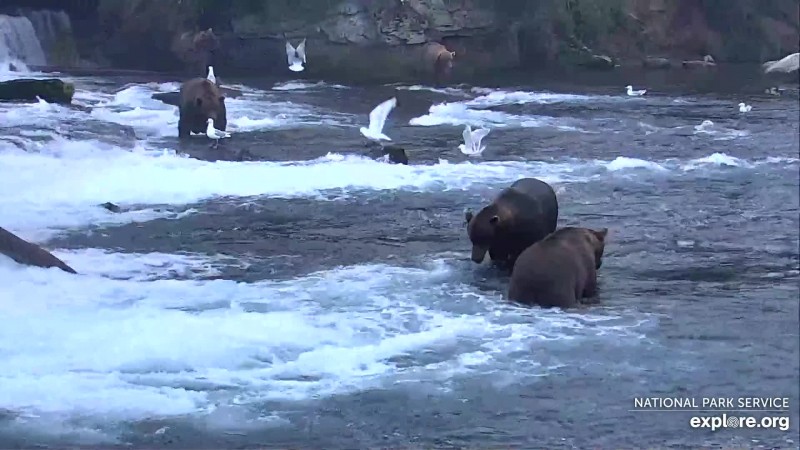 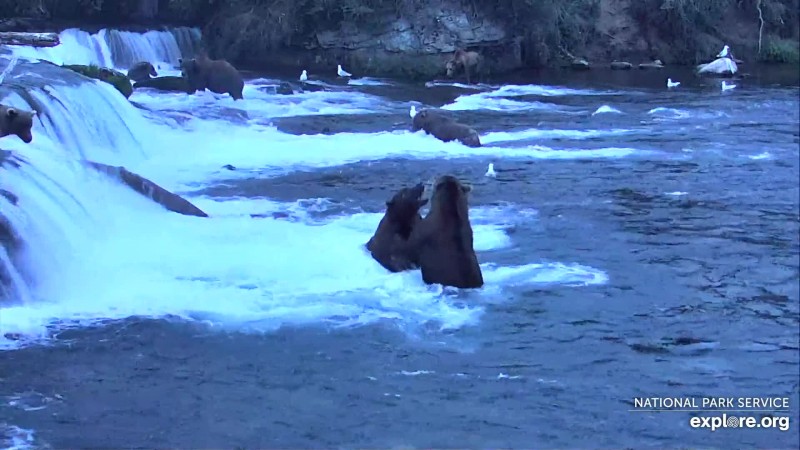 747 and 68 fight over jacuzzi Snapshot by Shel_

Thursday, 480 Otis and 68 had an altercation on the far side of the falls in the office area.  68 was moving into an area that Otis occupied. Otis did not want to move. Both bears stood on two legs and had a short battle.  480 ended up on his back in the river. The altercation ended quickly. 68 departed. Otis regained his feet and continued fishing.

89 Backpack has been around more this season.  Many long time viewers remember him as a playful young bear, play fighting with 32 Chunk some years ago.  And also as a bear who liked to sit on a rock near the falls and observe. This year, 13 year old Backpack seems to be looking for his place in the hierarchy at the falls.  He’s been observed refusing to move for 83, who wanted his spot at the falls, and also having a brief altercation in the Jacuzzi with 856. 89 did back away from this encounter allowing 856 to take over the Jacuzzi. 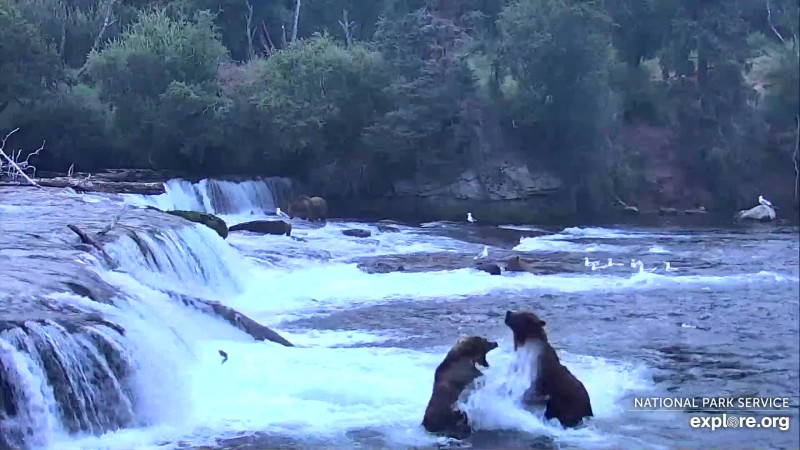 854 Divot seemed to get involved in an altercation between 151 Walker and 812. 151 Walker was having words with 812 and 854 Divot approached and growled at 151 Walker and actually chased him down the falls and over to the island. 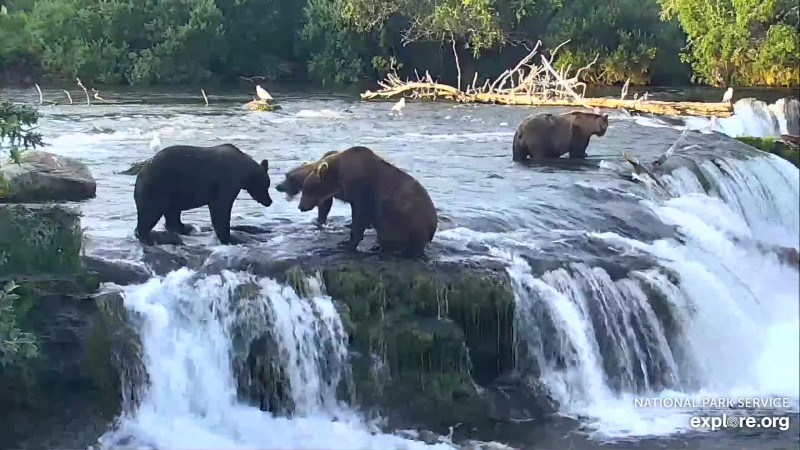 The new male bear around the falls with the large shoulder hump has continued to be observed daily.  He’s tried out many different fishing areas including the “office” area and the Jacuzzi. While his fishing style in the Jacuzzi looked a little different than some other bears, he did actually have decent success there. 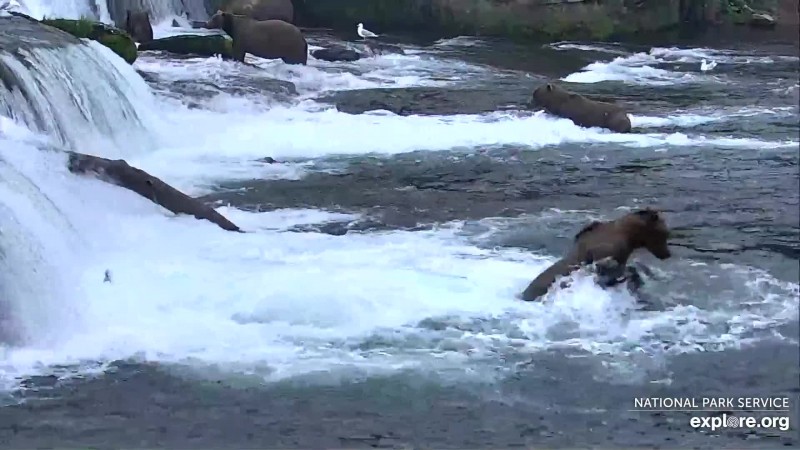 And he’s done well catching fish in other areas, too. He even had success with a sudden dash and splash move near the island.

While clearly not a dominant bear at the falls, it’s been interesting to watch a new adult male bear try to fit into the hierarchy at the falls.  On Thursday, this bear was seen trying to steal fish from 854 Divot on the lip. She was not pleased and “hump bear” needed to make a rather hasty slip and slide off the falls. He recovered quickly, dashing over to catch a fish as if he “meant to do that”. 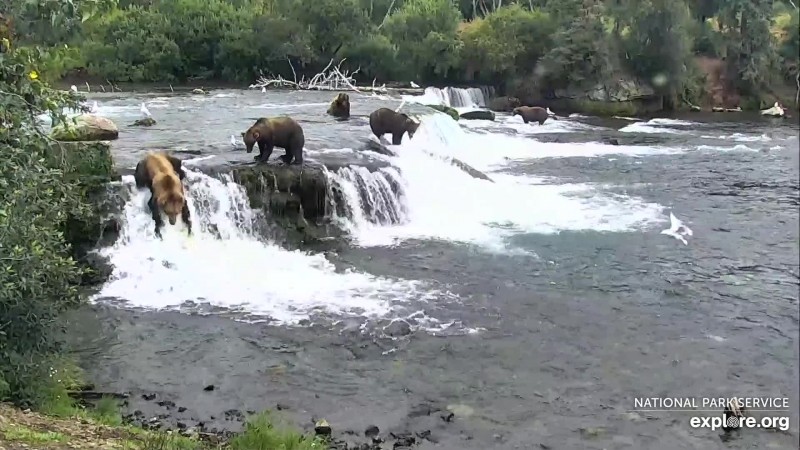 “hump” bear slips off the lip Snapshot by Phillydude

This week has seen a number of large male bears begging and attempting to pirate fish.  747, 68, and the new male with the hump have all tried to steal an easy meal from bears fishing at the lip.  Even in the face of a paw slap to the head, some continued to pursue this method. 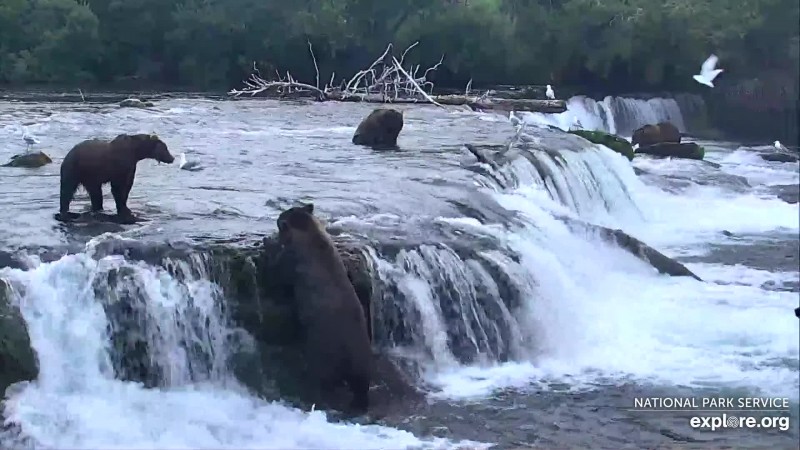 Subadult 812 has been entertaining us with his unique lip fishing habits.  His unmistakable stance on the lip – moving and waving his paws about and sticking out his long tongue – make him easy to ID.  He is also known for carrying his meals to the nearby rock where he sits to eat as if at a table. Some viewers have wondered if he has a problem that causes him to stick out his tongue all the time.  Mike Fitz had this comment:

“I’m not sure why some bears stick their tongues out. I have no evidence to suggest it is tied to excitement or any neurological issue. More than anything, it seems to be an individual habit of certain bears.” 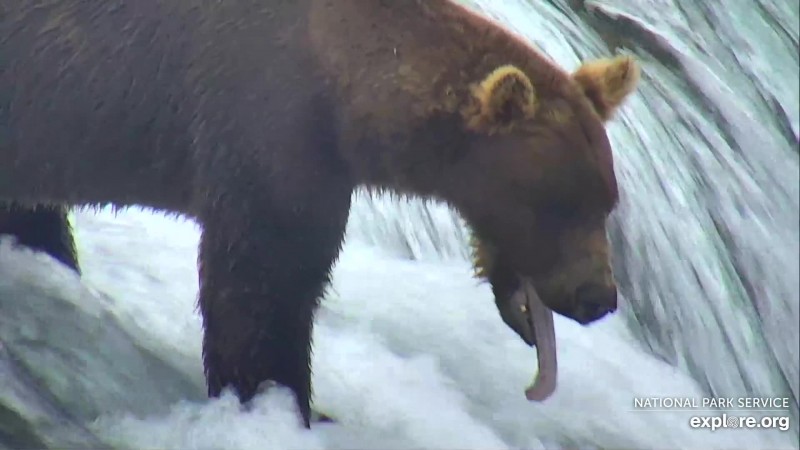 812 sticking his tongue out Snapshot by Bommy

812 was also on the lip when another young subadult (possibly 910) next to him displayed its unique fishing attempts.  It seemed to want to help the fish up the falls by paddling in the water with its feet. The two of them and their unique styles made for some fun viewing. 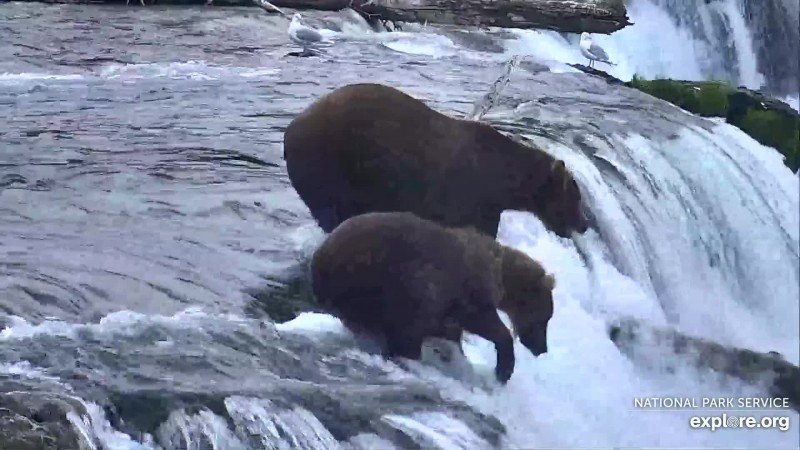 812 and maybe 910 fishing the lip Snapshot by SgtPepper

273’s 3 coy provided some good entertainment this week.  Their rough and tumble playing had one of them falling off the edge of the closed trail in the Lower River area. 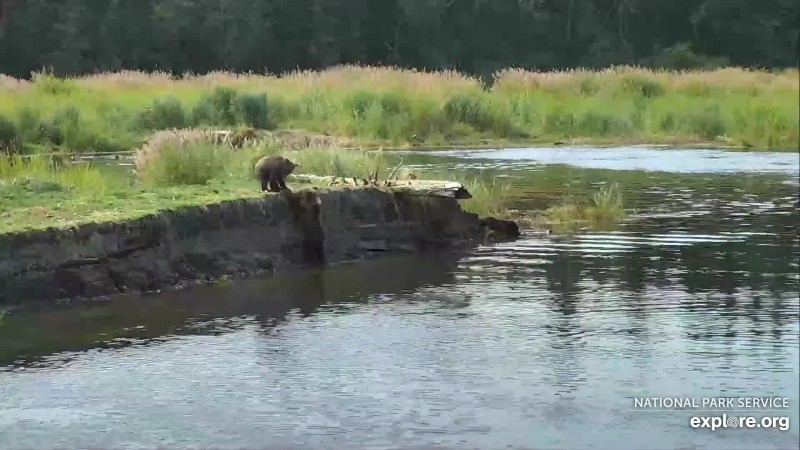 719’s 2 coy took play fighting a bit more seriously when they fought over a salmon on the spit. (They were fine and seen swimming and running around after their battles).  Mike Fitz commented about their fight:

“The fight between 719’s cubs was briefly intense but it was not abnormally so for a fight between cubs. I am not aware of a cub being significantly injured by its sibling. Of course, it’s not out of the realm of possibility so I can’t say it has never happened.” 813 and her yearlings were seen along the spit road. 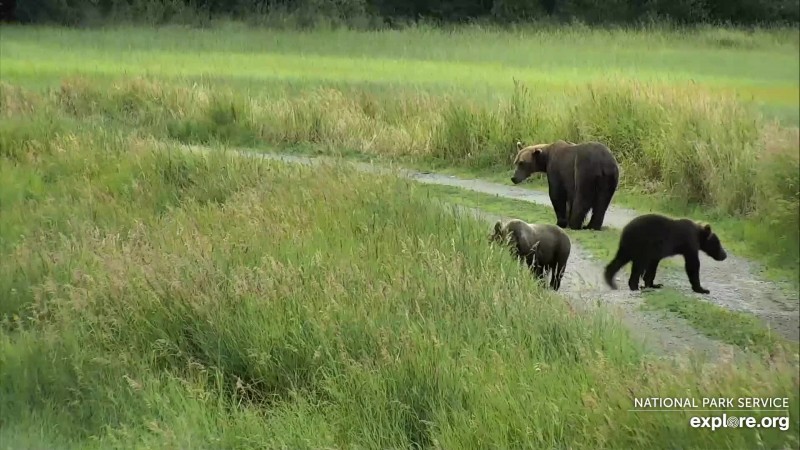 We had many great moments seen on the underwater cam like this “dancing” bear.

Temporary black out of the Lower River East Cam

Webcam views of the Brooks River mouth will be turned off between August 10-25 and during October. This is to provide privacy for family members of Katmai descendants who may use the “spit,” the long arc of beach gravel at the south end of the Brooks River mouth.  Read about the history and connection of the people who inhabited Katmai in this blog by Mike Fitz.

Meet 32 Chunk in this week’s installment of Bears of Brooks Falls.