An Exceptional August at Brooks River

During a lull in the bear activity in late July at Brooks River, I wrote a blog post explaining the typical pattern of bears at the river. In it, I hinted that most bears will soon disperse from Brooks River and we shouldn’t expect to see many bears until September. The bears and salmon, however, had different ideas. Regarding bear activity at Brooks River, August 2018 has been exceptional.

Over the past thirty years at Brooks River, bear activity typically peaks in early summer (corresponding with the migration of sockeye salmon) and again in late summer and early fall (corresponding with the sockeye’s spawning period in the river). Bear activity usually ebbs in August when the salmon are no longer migrating, but haven’t yet spawned. When salmon are energetic and swim in relatively low densities, then fishing conditions at the river are generally poor and bears disperse to other streams to feed. I expected this pattern to continue in August 2018. I even thought there might be days when we see no bears, something I experienced in prior Augusts at the river.

In 2013, for example, bearcam viewers saw almost no bears in August except when 489 Ted patrolled between the falls and lower river. In the summer of 2014, I supervised the interpretive ranger staff at Brooks Camp. For a couple of weeks that August, bear activity was so light that I gave rangers the option to not staff the “corner” on the north end of the bridge so they could focus on other tasks. In other Augusts, I remember standing on the wildlife-viewing platforms with visitors who spent days waiting for a glimpse of a bear.

So far August 2018 has been very different. Instead of few to no bears fishing at Brooks River, I’ve counted as many as ten bears fishing at Brooks Falls on multiple occasions. A casual count of bears throughout the course of the day can reveal 15-20 different bears at the river. This is an unprecedented number of bears at Brooks Falls in August, even exceeding the higher than average number of bears we saw there last year. 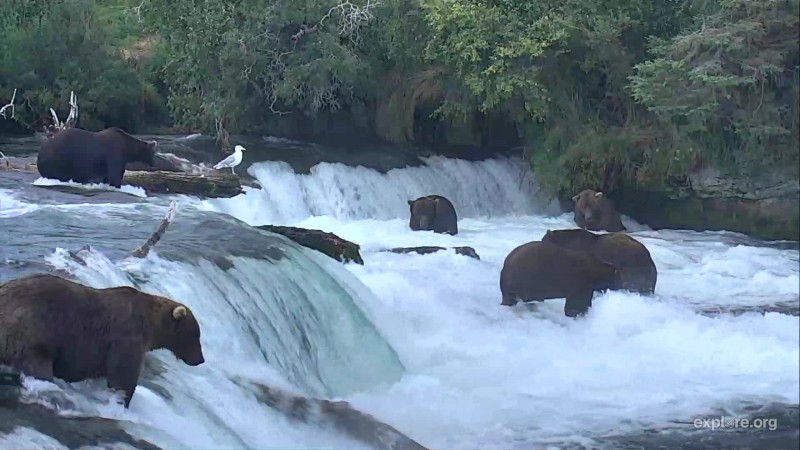 Several factors might explain the change. Bears may have just started to discover that fishing can be productive at Brooks Falls in August, something they once did at Brooks Falls in July. In the 1970s, for example, many bears fished Brooks River in autumn, but relatively few bears fished Brooks Falls in July. In the 1980s, the trend began to change and bears began fishing in July in greater numbers. By the early 2000s, the number of bears in July exceeded the number of bears in late summer and fall.

The shift might be more easily explained, however, by changes to salmon abundance and migration patterns. On August 12 at 3:40 p.m. AKDT, I counted 245 salmon jumping per minute at Brooks Falls. This rate rivals my biggest counts during the “normal” peak of the sockeye migration in July and this certainly isn’t something I would’ve expected based on my past experience. Why though, are so many salmon jumping now? What species are they and where did they come from?

Sockeye salmon might still be migrating through the river. For at least some of the sockeye, this would represent a shift in the timing of their migration from early to midsummer. It could also be a product of the overall large sockeye run in Bristol Bay this year (over 62,000,000 fish and counting!) with more fish simply coming later than average. About 2.22 million sockeye entered the Naknek River watershed this year. This is a significant number of fish and about 20% of those are estimated to have entered Brooks River. However, larger sockeye escapements occurred in 2007 and 2008 (2.94 million and 2.47 million fish, respectively) and bears were not a common sight on the river in August during those years. This makes me suspect another possibility—other species of salmon.

Brooks River hosts five species of Pacific salmon. Sockeye salmon are the most numerous in the river by far, but pink and silver (aka coho) salmon can also be significantly abundant. Their runs can bring a few hundred to a few thousand individual fish in an average year. Very large runs of these fish could be the main reason so many bears continue to fish at Brooks River. Because they aren’t commercially harvested in the Naknek-Kvichak district of Bristol Bay, escapement for these species into the Naknek River watershed is not tracked so we can only guess that these runs might have become larger in recent years.

No matter the real reasons, salmon have remained sufficiently abundant at Brooks River to keep many bears around. I’m unsure if this pattern will hold in the future though. In August 2017, bears fished at the falls in greater than average numbers too. Are we witnessing a fundamental shift in the bear activity at the river? Or, is this a temporary phenomenon dependent on exceptionally large runs of silver or pink salmon?

Bears have proven me wrong before and they did so again this August, but honestly, I don’t mind. Ecosystems are complex and ever changing. This increases my motivation to carefully observe the world around me. The frequency of bears fishing and the number of bears fishing at Brooks River each day this month was not something I expected, but even if we see no bears for the rest of the month, this August at Brooks River has already proven exceptional.