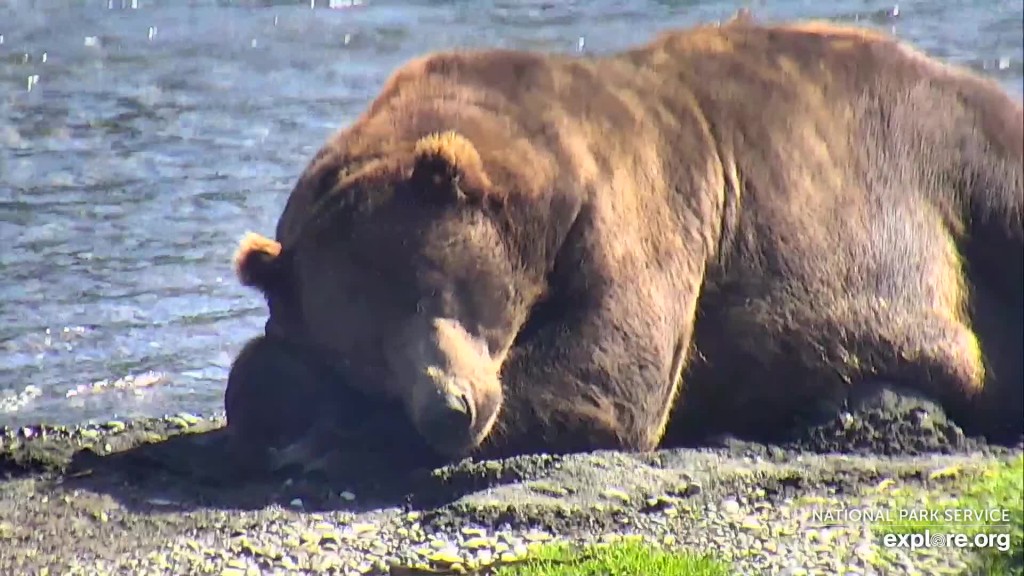 This week we saw less fish and less bears.  It looks more like August, when we expect the salmon run to slow and bears to move to other more productive areas to feed on fish or berries.  As of Thursday, the only adults we are seeing on the cams are 708 and cubs, 755 Scare D Bear, 480 Otis, 747, 806, and the unknown male with the large shoulder hump. Bears seen earlier in the week that seem to have moved on were 128 Grazer, 89 Backpack, 775 Lefty, 854 Divot, 68 and 469.  There are also still a number of sub adults being seen. 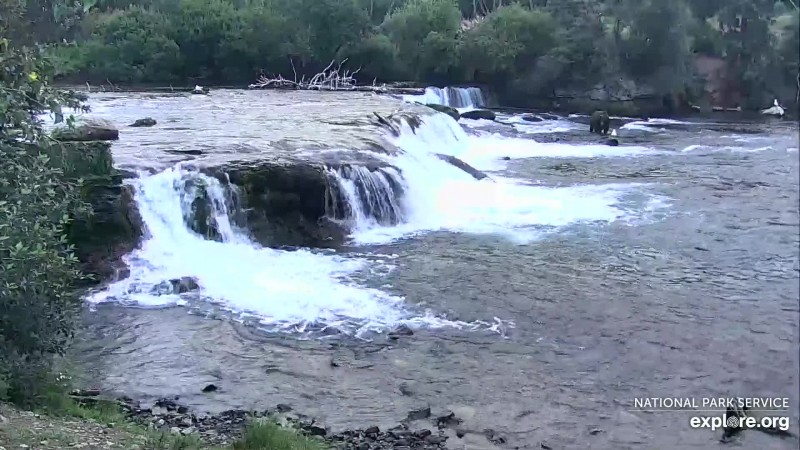 Few bears and no salmon jumping Snapshot by Phillydude

Before they left, 775 Lefty and 128 Grazer had synchronized salmon catches on the lip of the falls.

755 Scare D Bear has been seen fishing closer to the platform side of the falls more often this year during times when there would be few or no humans on the platform.  He was caught on cam jumping around in the Jacuzzi this week. 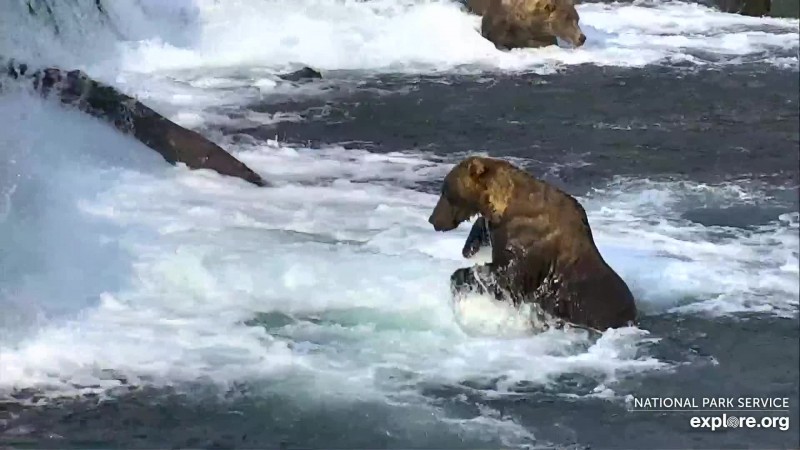 68 gave us a nice view above the falls before he moved on. 747 has had a good share of cam time.  He spent the better part of one day napping.  After digging a nice belly hole on the island below the falls, he napped there for a long time. 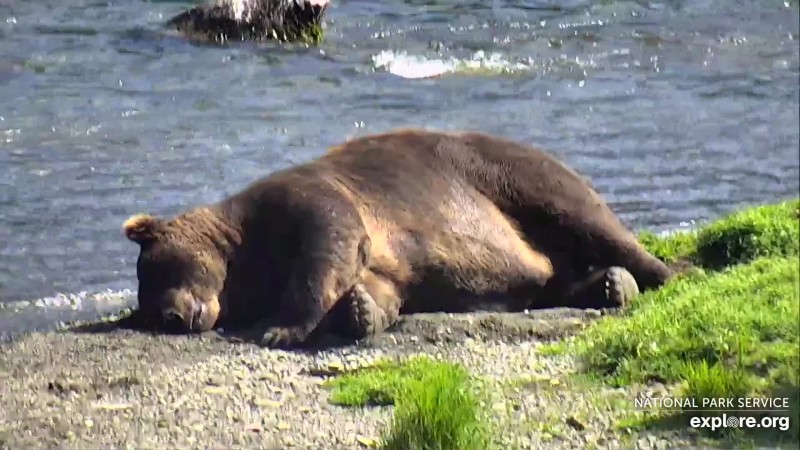 747 napping on the island Snapshot by CamOp Jo

When he finally roused himself, it was only to move a short distance into the river (perhaps because the temperature was quite warm and he’d gotten hot sleeping in the sun) where he continued his nap, and blew some bubbles in the river when his nose sank below the surface. 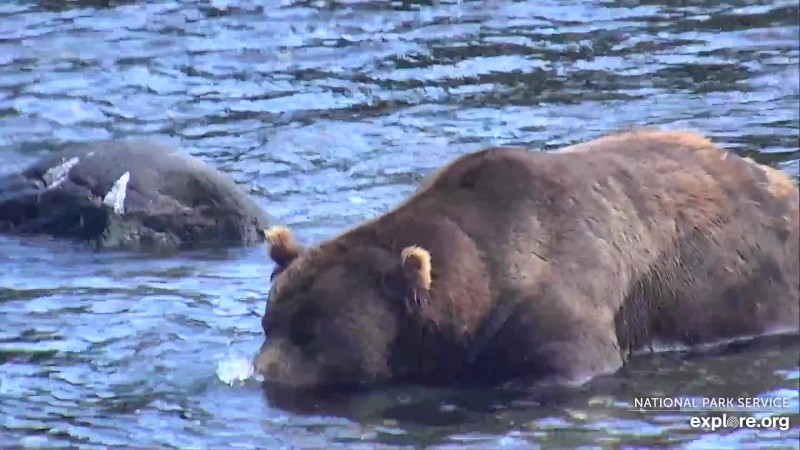 812, a subadult, decided the best place to take a nap was on the lip of the falls. While keeping an eye on 747 who was in the jacuzzi. 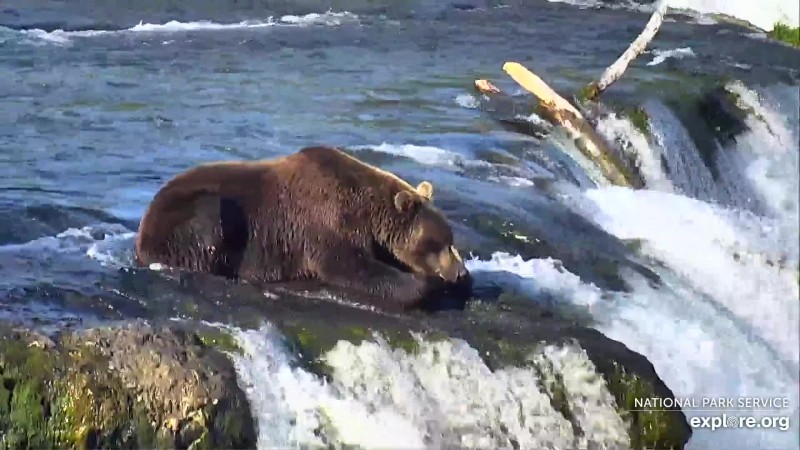 812 napping on the lip Snapshot by CamOp Tink

747 found that perhaps being the fattest bear on the river has some drawbacks when he tried to use the boulders to climb over the falls on the far side of the river and slid back down into the river.  He has been able to navigate both up and down the steep far path successfully. 🙂 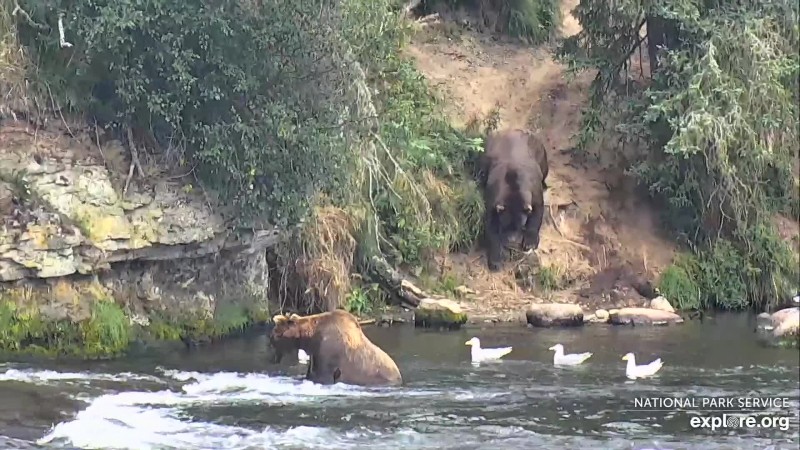 747 comes down the far path Snapshot by rookie1

Earlier in the week, when 469 was at the Brooks River for a few days, we saw him having several encounters with other dominant bears.  Since 469 has not been a regular at the river in recent years, it was interesting to see that the dominant bears had respect for him. Mike Fitz made this comment about 469:

“469 is a large adult male, so given that fact alone he is going rank high in the hierarchy. Most often 469 is only seen in early fall when food is more dispersed and bears aren’t congregating at the falls as frequently. He’s really never been a regular visitor to Brooks Falls in July. The only time he ever spent fishing at Brooks Falls in July was in 2013 when he had an injured leg which would have hindered his ability (to) compete with other bears.” 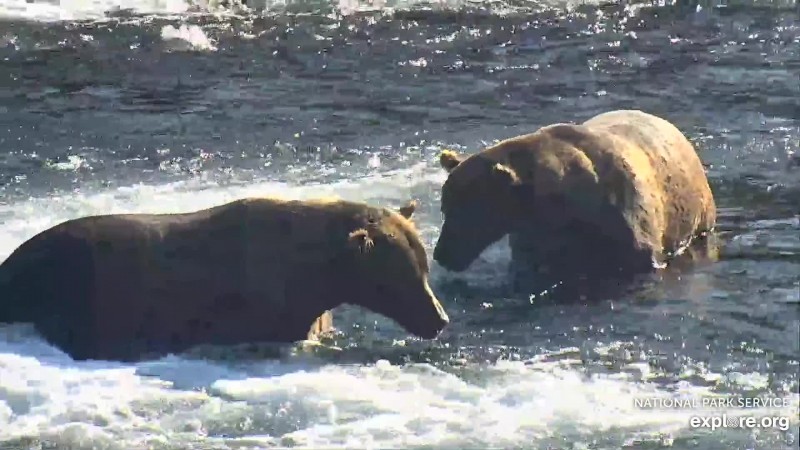 469 displaces 747 from the jacuzzi Snapshot by snorey_2

The new male bear with the large shoulder hump has been a regular visitor this week.  He has found success fishing on the far side of the falls and in the area known as the Office on the far wall.  This has put him in the same place that 480 Otis also likes to fish. 480 has sometimes given up his spot to him, and sometimes stood his ground and not allowed the new bear to displace him. Both bears also seem to retreat to a similar spot near the boulder further down from the Office and will rest or dose there while waiting for an opening to fish nearer the falls. The new bear with the Hump has given us a smile with some of his poses caught on the cam. 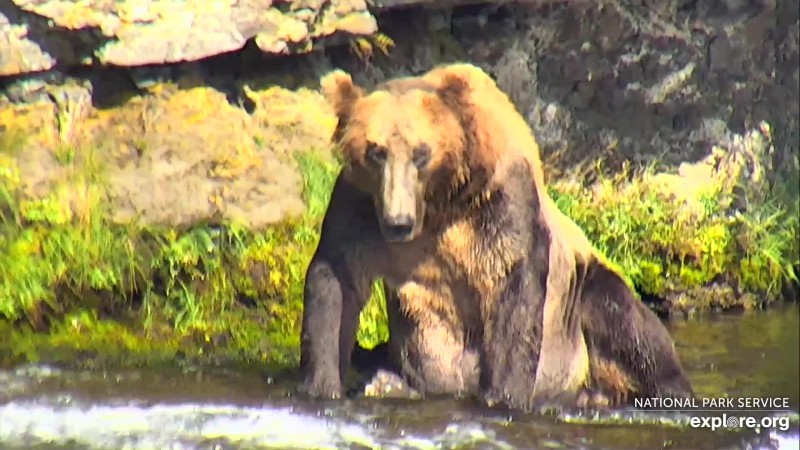 We’ve had a few sightings of 708 Amelia and her two cubs in the Lower River area this week. 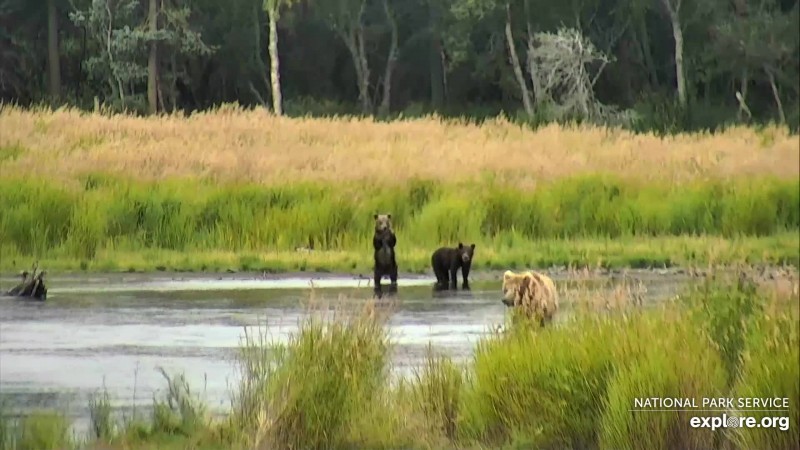 The subadults have often stolen the show this week.  They all seem to be well fed and have some time for playing.  Both with each other and with items they find of interest along the river.  We’ve seen them play with a dead tree in the river; industriously dig in the vegetation along the river edge, even stomping on it in an apparent attempt to dislodge some hidden treasure; wrestle, dive and seem to have a lot of the bear version of fun. 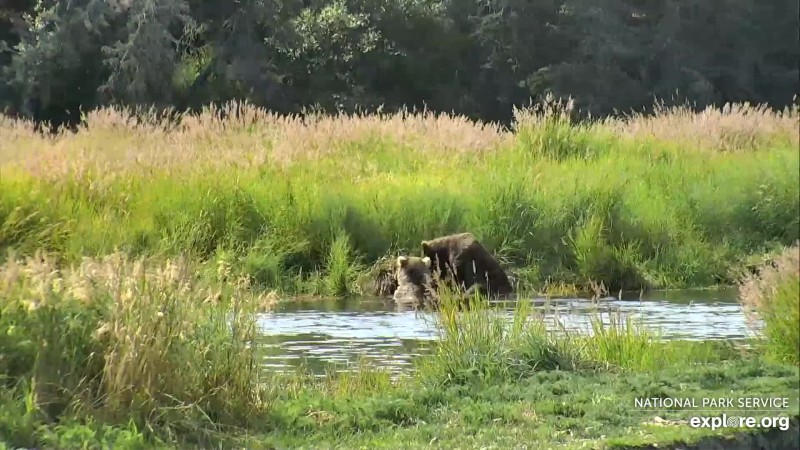 Its good to see the the large salmon run has allowed the subadults to be well fed. Which allows us to see them play and have fun. 821 plays with another subadult Snapshot by Marizy

821, in particular, really seemed to enjoy bouncing on a log at the falls. 821 also demonstrated his new lip fishing technique.  He sits on the edge of the lip to fish! And has success catching fish this way.  Perhaps his body is helping to trap the fish. 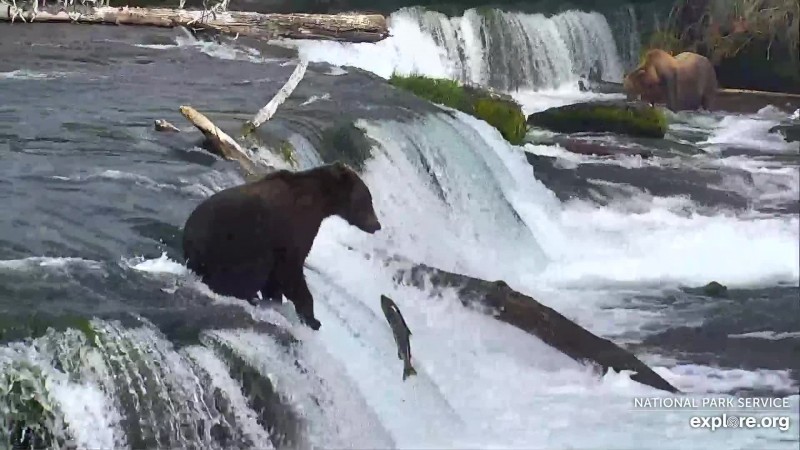 821 sitting on the lip to catch fish Snapshot by Shel_ 821 makes a catch Snapshot by SueB

Another sub adult didn’t do as well up on the lip with other bears and ended up slipping off the edge. 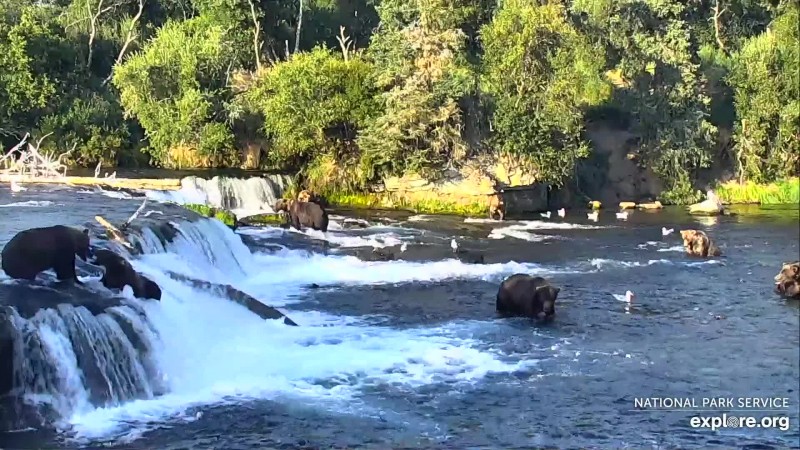 910 slips off the lip Snapshot by Phillydude

With so few adult bears at the falls the subadults have been given the opportunity to try out fishing the lip and the jacuzzi. This caused 806 an adult female to voice her displeasure at 821 who tried to get on the lip. 806 and 821 have words on the lip Snapshot by GreenRiver

This sub adult showed how to chase after salmon in the river. The sub started off chasing one and then would see another swim and would run after that one. In doing this the subadult scared the other bears on the island. We saw a sub adult eating dirt scooped off the river bottom. Mike Fitz gave this explanation for the behavior, called geophagy:

“A diet rich in salmon though has consequences though, especially for their digestive system. You may have noticed that bears have very loose, diarrheal stool at this time of year. Salmon aren’t the only thing they eat. Sometimes they’ll eat peculiar things, like earth. This is a bear excavating and eating clay, a behavior known as geophagy.  Geophagy is not uncommon among bears across the world. The papers I’ve read on it suggest that could act as an anti-diarrheal agent.

At Brooks River, bears won’t eat just any bit of dirt. They target the 8-12 inch thick layer of volcanic ash from the 1912 Novarupta-Katmai eruption, which has weathered into a gritty clay. The clay may help absorb excess nutrients like potassium that can increase water in the digestive tract. In the absence of veterinary care, bears must deal with their own ailments and sometimes a change in diet can help them cope.” Meet 775 Lefty  in this week’s installment of Bears of Brooks Falls.

Temporary black out of the Lower River East Cam

Webcam views of the Brooks River mouth will be turned off between August 10-25 and during October. This is to provide privacy for family members of Katmai descendants who may use the “spit,” the long arc of beach gravel at the south end of the Brooks River mouth.  Read about the history and connection of the people who inhabited Katmai in this blog by Mike Fitz.