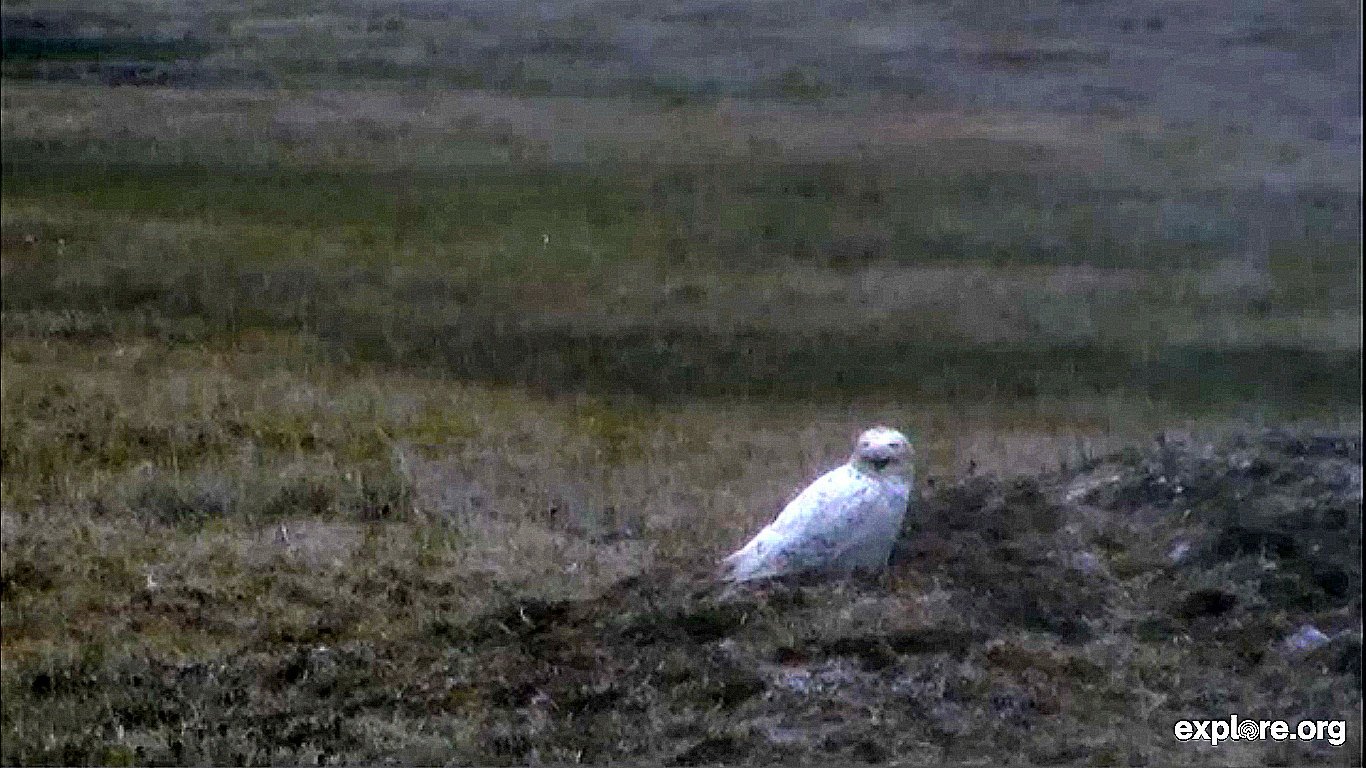 We have a couple updates and lots of insider information from Denver at the Owl Research Institute from the past two weeks. Read below for highlights and background on this Owl family – and see them on the on the Live Cam here.

(And thanks to our Cornell Lab of Ornithology moderator, Hollie_CornellLabStaff, for the screen snapshot of the female calling!)

Our female probably began laying in mid-May. She had 7 eggs during the first week of June. Her first chick hatched around June 6th, followed sequentially every day or other day for the rest. By June 29th all 7 chicks were in the nest.

Food has become scare however. The 7th and 6th chicks died in the nest shortly after hatching. They probably died of starvation and were most likely fed to the other chicks by the female. This is not uncommon if food is scarce. Occasionally the female might also eat one.

As of July 6th, there were 4 chicks. They all looked healthy, but the 4th was several days behind in age.

Lemming populations must have been high in spring as there are a high number of nests and most nests have large broods (3-9 range, average 6-7). That being said, lemmings do not seem to be staying abundant. Our sampling indicate that lemmings are out there but not in as high of numbers as would be expected. As a result, the Snowy owls at all nests are eating a higher number of birds than is usual. We are seeing them eat Red Phalaropes, northern pintail,long-tail duck, eiders, glaucous gull, long-spurs, and snow buntings.

Viewers may be noticing geese frequenting the nesting area. We are working with BBC to document the relationship between the geese and Snowy Owls. These geese are nesting about 20-25m from the Snowy Owl nest. We (ORI and BBC) are looking at the relationship between geese and other birds nesting close to the owls perhaps for protection from predators (mainly fox, gulls, and jaegers). In exchange for protection, they could lose one or two chicks after they hatch to the owls. The goslings are hatching today- so be on the lookout!

Lastly, a note about the weather. Winds have been blowing really hard and cold from the East- Northeast (wind chills in the low 20s). As a result, you have seen the female move chicks out of the nest, over the edge to get out of the wind (which is blowing at 20mph or higher). Sometimes the female will even dig another bowl and move chicks to the other side. This is normal behavior.

Catch a glimpse of the Tundra Ghost, AKA Snowy Owls, on the Live Cam here!

bird cam
bird cams
bird watching
cornell lab of ornithology
explore.org
owl research institute
owlets
July 15, 2014
← Rachel Says, “What?!”
Is That an Osprey in Your Bag or Are You Just Happy to See Me?! →