Two of bearcam’s most recognizable bears are also the oldest known bears at Brooks River. Bears 410 and 480 Otis, have survived the last several years in the face of competition from younger, larger, and stronger bears. How will their experience help them meet the challenges of making a living this summer?

First identified as a young adult or older subadult bear in 2001, Otis is the oldest known adult male at Brooks River. Now approximately 22 years old, he’s often immediately recognizable due to his floppy right ear and predictable fishing habits. As a large-bodied adult male he can often find space to fish at Brooks Falls and prefers to fish the far pool and jacuzzi. 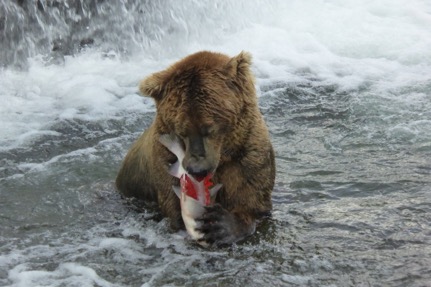 410 is the oldest bear who uses the river and is believed to have been a spring cub in 1989, which makes here 29 years old in summer 2018. 410 is a large adult female who shows a great amount of tolerance for other bears. Many other bears seem to recognize 410’s indifference towards them, which sometimes allows her to gain access to fishing spots near the falls without having to force her way in or displace other bears.

410 is also well known for her frequent naps, although Otis is no slouch when it comes to rest.

Both Otis and 410 honed their fishing skills over many years. They employ their experience and patience to catch salmon while exerting as little energy as possible. So far, this strategy has proven very successful as the longevity of these bears demonstrates. (A little bit of luck and consistently large salmon runs over the past twenty years doesn’t hurt either.) Still, these bears face many challenges, which won’t get any easier.

Living in the wild is rough, especially on a bear’s teeth. Otis is missing two canine teeth (one on the upper right and one on bottom left). So far, this has only caused him to eat his fish slower and less gracefully than other bears unimpaired by tooth loss. While I haven’t been able to see if 410 is any missing teeth, she likely has significant tooth decay and wear, as this is a typical ailment of older bears. Worn and broken teeth can hinder their ability to catch and eat salmon or defend themselves from other bears when necessary.

Like all of Katmai’s brown bears, 410 and Otis must eat a year’s worth of food in six months or less to survive. Competition between bears, particularly the best fishing spots at Brooks River, can be intense. Outside of the relationship between a mother and her cubs, bears live in a “me only” existence. Otis is no exception. From 2007-2009, I witnessed him displacing younger bears from the jacuzzi.

Now, the same bears displaced by Otis have grown into large adults and they are primed to use their size and strength to their advantage. In the GIF above, made from video recorded in 2009, Otis displaces 747, who was then a smaller bear. In the GIF below, 747 displaces Otis from the same place in 2015.

The average life span of a brown bear is about 20 years, but bears have been documented to live for over 30 years. In Katmai, the legendary bear nicknamed Diver was well known at Brooks River in the 1970s, and he was estimated to be over 30 years old when last observed in 1999. Remarkably, a wild black bear in Minnesota lived to be 37.

Will Brooks River’s oldest bears reach 30 years of life? As 410 and Otis age, they will face competition from younger, larger, and stronger bears. If 410 and Otis return this summer, their survival skills and instincts will be put to the test once again. They live in a competitive and risky world. Their longevity demonstrates a level of individual success few bears achieve, but the challenges posed by the environment and other bears will never get easier for Brooks River’s eldest bears.