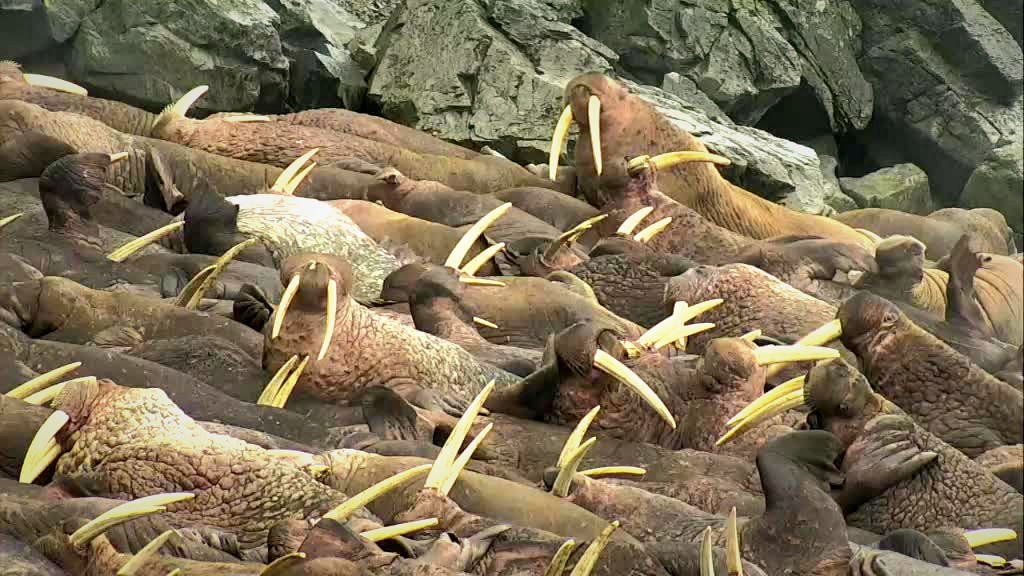 We’ve seen a lot of great questions on the Walrus Cam from fans wanting to know more about tusks, how they grow, how they’re used, how they break, and how they’re analyzed to estimate a walrus’s age. Round Island “Walrus Wardens” Ryan Morrill and Ben Histand dig into your toothy inquiries.

“Walrus teeth are designated as incisors, canines, premolars, and molars.  The upper canines are known as tusks and are the largest and most deeply rooted of all their teeth.  These elongated canines can reach a length of 1 meter and weigh over ten pounds.  Relative to the horizontal plane of the skull, the tusks jut out slightly forward and to the side, rather than extending straight down.

The tusks grow continually, like the incisors of rodents, elephants, and a few other mammals. Their growth is cumulative; new increments are added at the proximal end of the tusk, resulting in a continual increase in length as well as in mass with increasing age.

While there is constant growth in tusks, there is also loss due to abrasion from contact with the mud, sand, and gravel of the sea floor while the animals are feeding. Fractures also occur, especially in adult males who have curved high divergent tusks. Major fractures of the tusks of the females seems to occur less often than in males, possibly because females avoid haul-outs on rocky shores and engage in less vigorous fighting. Abrasion also plays a part in weakening the tusk, especially along the upper surface towards the tips, where the outer layers of cementum and dentin are worn away, exposing the core.  This structurally weakens the tusk and makes it more susceptible to fracture.

The most compelling evidence that tusks aren’t necessary for clamming is that adult males with no tusks are just as large and well fed as those who have a full set. The primary role of the tusks is probably a social one, most important during mating season, which has the greatest immediate and long-term impact on the gene pool (Bartholomew 1970). Although tusks often function secondarily as weapons, their primary value is in ritualized dominance-threat displays in which fighting is minimized and often amounts to no more than a show of strength. The use of tusks as auxiliary appendages for locomotion, especially when hauling out on ice or land, has been recognized for a long time and was the basis for the generic name Odobenus (Greek: odus, odonto = tooth; baeno = walk). Walrus have been seen resting or sleeping in the water with their tusks hooked over the edge of the ice, keeping the mouth and nostrils out of the water.

Archeologists have dug up fossilized tusks here on Round Island that were used as large tent stakes for native Aleutian’s barabara dwellings. When we observe tusks on the beach (loose or from mortalities), we collect and measure them and donate the ivory to the Eskimo Walrus Commission, which conducts the sale to native carvers. This is in order to fully utilize the ivory and reduce attracting illegal ivory hunters to the island.”