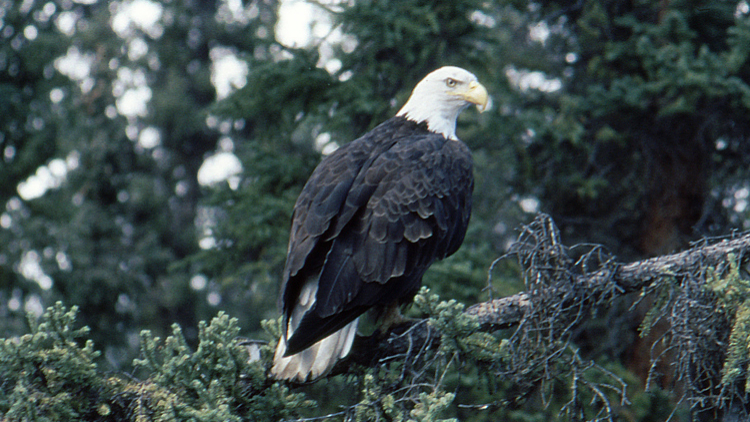 By Andreas Trepte (Own work) [CC-BY-SA-2.5 (http://creativecommons.org/licenses/by-sa/2.5)], via Wikimedia Commons

On Thanksgiving, families across the U.S. will sit down for holiday staples like turkey and stuff, sweet potatoes and pumpkin pie. In the forests and deserts, though, native wildlife populations will be hunting and gathering far different meals. Check out feasts for bears, deer, wolves and other All-American creatures.

Both grizzly bears and black bears eat a diverse array of food and their diets change depending on what is available. In the fall, grizzly bears will snack on berries, limber pine nuts, insect nests and other odds and ends found in the forest. The black bears’ diets are very similar. Of course, if bears can get their hands on some meat or fish, they’ll eat that too and it’s unlikely that they would pass up dessert.

By Andreas Trepte (Own work) [CC-BY-SA-2.5 (http://creativecommons.org/licenses/by-sa/2.5)], via Wikimedia Commons

The great American bird, the bald eagle, probably won’t be diving for the turkey at Thanksgiving. This bird’s favorite food is fish. The kind of fish doesn’t really matter, eagles will take whatever they can grab from the oceans or fresh water sources. There may all be some ducks or birds on the menu. If the bald eagle spots carrion– maybe a seal or a deer– there will be a massive feast for the whole flock. Eagles do have to keep an eye on each other during dinner, though, these birds are notorious for swiping food from someone else’s plate. (Source: Bald Eagle Info)

For a big feast, coyotes might band together as a pack and go after a deer. On their own, these hunters might pick up a few extras, maybe a badger or mouse, or perhaps a few birds and a snake. For side dishes, the omnivorous coyotes might gather some vegetables. Fruits and berries will make a nice dessert to cap off the night. (Source: New Hampshire Public Television)

Wolves love meat, the bigger the cut, the better. This Thanksgiving, solve may feast on larger animals. Elk, deer, moose and caribou are favorites. Maybe for a side dish, they’ll have some beaver or rabbit. Some fresh worms and grasshoppers might make for a good appetizer and berries will likely be served for dessert. If they end up with an upset stomach, they might snack on some grass later.

Whitetail deer will have a vegetarian table set for Thanksgiving. The main course will be acorns, which deer love. Perhaps they will serve this with a variety of other nuts, like pecans, if they’re feeling fancy. Fruit is another big part of the menu, so long as they can get their hands on a few apples. Expect a special salad for the deer’s Thanksgiving as well. They often eat grass, wildflowers and mushrooms. If there’s a farm nearby, they might pick up a few delicacies, like sweet potatoes, as well. (Source: New York Antler Outdoors)

By MONGO (Own work) [CC-BY-SA-3.0 (http://creativecommons.org/licenses/by-sa/3.0) or GFDL (http://www.gnu.org/copyleft/fdl.html)], via Wikimedia Commons

Like deer, elk will celebrate a meatless Thanksgiving. Their holiday salad will consist of whatever grass they can source locally. They might dress up the dish with some huckleberry, willow, snowberry, sagebrush or other plants that are available to them. (Source: Wildlife Habitat Council)

Moose Thanksgiving feasts will vary depending on location and weather. If they can still feast on leaves, they will. There are a variety of leaves that moose enjoy. Twigs will certainly be part of the menu as well. If the weather is already messing with food sources, moose will add bark to the holiday feast. Depending on where they live, that could be willow, birch, aspen or a few other types that are preferred by these large herbivores. (Sources: Moose World, New Hampshire Public Television)