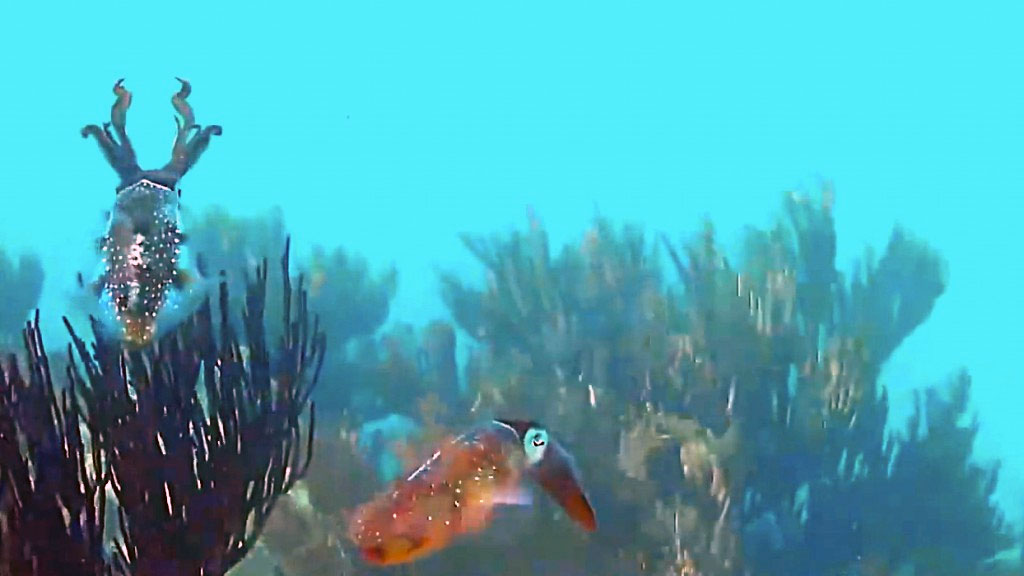 Squids Spotted on the Cayman Cam

A couple of Caribbean Reef Squids were spotted on our Cayman Reef Cam over the weekend. As the torpedo-shaped twosome hovered above the coral, their tentacles billowing in the current, they interacted with each other. Flirting, maybe? Check out the highlight clip below and catch some of the colorful surprise guests towards the end of the video.

The Cayman Reef Camera is situated in the Caribbean Ocean, just inside the fringe reef on Grand Cayman’s East End. It’s here that we are treated to a view of a live coral habitat. Water temperatures are warm and stable year-round, the shallow areas bathed in sunlight. The sun’s light provides sustenance for the algae that in turn feed the polyps comprising the coral reefs. Coral reefs are some of the most diverse ecosystems in the world, visited by thousands of marine species. The polyps secrete calcium carbonate, creating hard structures which are great hiding places for fish. The algae and coral are consumed by larger species of fish and invertebrates.

Squid, too, hang around the coral reefs during mating season. In the below video clip we may just be witnessing potential mates communicating with each other. Squid “talk” by changing color, shape, and texture. The two seem to nuzzle for a time, then quickly run away together with the speed and power of jet propulsion. Stick around for a bolt of blue as a school of tang crowds the coral in a dazzling show of color. Check it out: