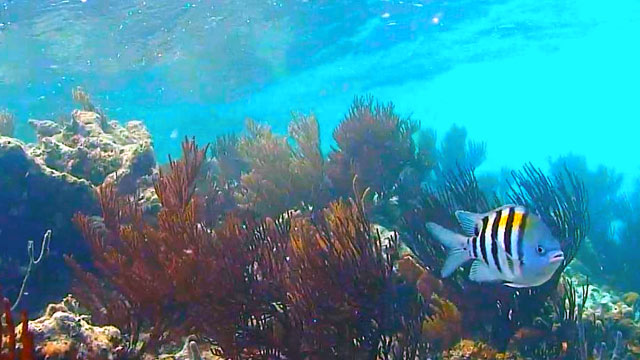 Cayman Reef Cam viewer meryl captured this photo of a sergeant major showing off his stripes. Find out how this little fish got such a high rank and why it likes to boss other fish around. Sergeant majors grow up to 9 inches long and weigh less than half a pound, but they get their scientific name for their bossy behavior. Officially a “abudefduf saxatilis,” named by Carl Linnaeus (1758); “abudefduf translates as ‘father,’ saxa as ‘living among rocks,’ and tilus as ’tile-like in color’. It is called father due to its bossy, aggressive behavior towards other inhabitants on the reef,” (University of Florida).  It’s commonly known by its English names: sergeant major, damsel fish, five finger, and pilotfish. “Sergeant major,” of course, comes from the military style stripes adorning its sides – – sergeant major is a senior non-commissioned rank or appointment in many militaries around the world.  The range of the sergeant major is worldwide in warm waters. The sergeant major can be found along Cape Verde, the tropical coast of western Africa and south to Angola. This fish appears in warm waters along the eastern U.S. coast from from Rhode Island (U.S.) down to Uruguay. Sergeant majors are “quite abundant on Caribbean Sea reefs as well as around islands in the mid-Atlantic region,” (UFl), and that takes us over to the Cayman Reef Live Cam where you might best catch a sighting during the daylight hours. At dusk, feeding ends and the fish scatter to seek cover in the crevices of the reef. The Cayman Islands are in the Eastern Time zone and best viewing times are sun up at 6:30 AM EST – sundown at 5:30 PM EST this fall. See the sergeant majors and other aquatic wonders on the Cayman Reef Live Cam now.

Fun Fact – Reversing the Gender Stereotypes: Courtship rituals include males actively chasing the female during the morning hours. During this time, the males build nests. During spawning, approximately 200,000 eggs are released… An adhesive filament attaches the egg to the bottom substrate. The male sergeant major takes on a bluish color while guarding the fertilized eggs. He guards them until they hatch which occurs within 155-160 hours following fertilization. This guarding of the eggs, characteristic of the family Pomacentridae, is unusual since most reef fishes have a planktonic stage. The larvae reach 2.4 mm in length approximately 36 hours after hatching. They are deep-bodied, with the caudal and pectoral fins visible, prominent lips, and well-developed jaw bones. (UFl)