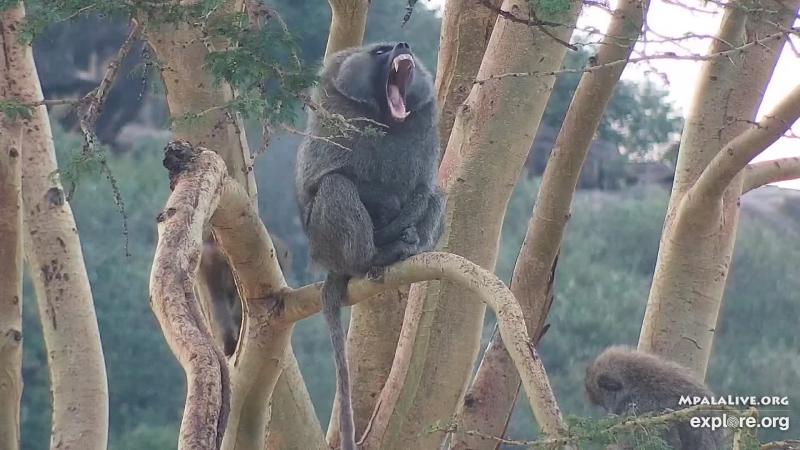 Image captured from the live stream at Mpala's hippo pool.

Monkey Business at the Hippo Pool

Camera operator Lily caught this great shot of an olive baboon greeting the morning in full howl. She says, “I love watching the baboons get ready for the day just as I’m getting ready for bed.”

Olive baboons communicate within their group using barks, growls, grunts, screams, and coughs. Adult males make a loud wahoo call, either spontaneously or during aggressive encounters. Their call can be heard as far as 1.9 miles (3 km) away–probably true for the howl pictured here.

At the beginning of the day, olive baboons sunbathe in their sleeping spots, which can be in the tops of trees as seen on the live cams. Then they descend from the treetops and spend the daylight hours eating, grooming, and moving about before returning to a safe sleeping spot at dusk.

There are five species of baboons and on Mpala, we have olive baboons. These highly social creatures live in troops that can number as many as 130 individuals. They have a fascinating social structure. Within each group, males and females each have separate social hierarchies. Female dominance is inherited, with the youngest daughter assuming the rank below her mother and above her older sisters. Males, however, must use aggressive behavior to gain dominance within the group. And females stay with their birth troop while males join other groups when they are six to nine years old. Olive baboons have a life span of 25 to 30 years in the wild.

One of the intriguing behaviours around the hippo pool is that the baboons and vervet monkeys seemingly coexist peacefully. Baboons eat a primarily plant based diet but supplement it with animal protein and hunt both vervets and small antelope like Thomson’s gazelles. So, it’s notable that we sometimes see both vervets and baboons hanging out in the same tree. The vervets may serve as lookouts for mutual predators such as lions, leopards, servals, wild dogs, hyenas, and crocodiles.

Here’s more about these fascinating creatures:

*When a troop is attacked by a leopard, sometimes the adult males (and occasionally even adult females) mob the leopard and force it to retreat.
*Moms are pregnant for 6 months and the young are weaned 300 to 480 days after birth.
*Even if a low-ranking male makes a large kill, he may not get to eat it. He must give the carcass to the highest-ranking male as soon as he arrives.