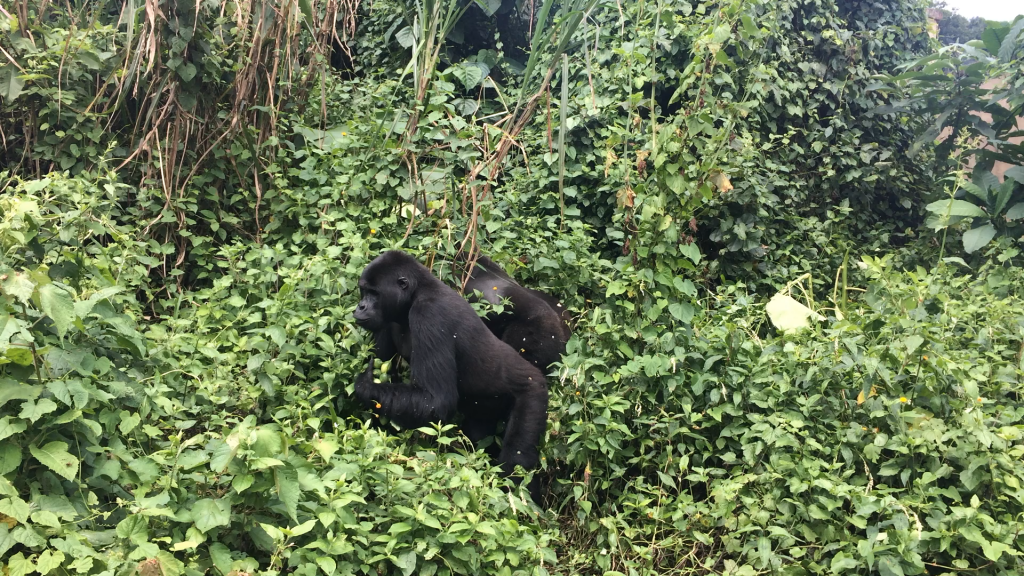 GRACE Gorillas Singing in the Forest

Did you know gorillas sing? When they are especially enjoying their food, they make little noises of delight and contentment. A sort of gorilla version of a cat purring. The video below is a heartwarming look (and listen!) showing some very happy gorillas. It is quite special and not often recorded.

At GRACE, the gorillas spend most of their day together in the forest, foraging for food and traveling together as a group. Even in the large forest enclosures at GRACE, the gorillas’ intense foraging habits take a toll on the vegetation. So, as part of our regular management practices, the gorillas rotate between the original, 24-acre enclosure and the newer, 15-acre enclosure, spending each day in one for a period of 6 months or more before rotating to the other.

In late August, the gorillas rotated from the 24-acre enclosure to the 15-acre enclosure. Compared to the forest they’d been visiting every day for months, the unused enclosure is abundant with plant life – or to the gorillas’ eyes, delicious food! The gorillas were so happy to see all of the vegetation that they began singing as soon as they entered the forest – a sign of extreme contentment in gorillas and a rare treat to hear!

As Dr. Katie Fawcett, GRACE’s Conservation and Engagement Manager, put it, “The enclosure had been empty for more than 6 months, so there was plenty of time for new vegetation to grow. The gorillas were very happy. It made my heart sing to hear the gorillas sing!”

Learning to be Gorillas in the Forest

Each of the 14 Grauer’s gorillas at GRACE was rescued as a lone infant, after losing their families to poaching. GRACE is the only sanctuary in the world for critically endangered Grauer’s gorillas. Our rehabilitation focus prioritizes the welfare of every individual gorilla in our care, with the ultimate goal of preparing the gorillas for reintroduction back into the wild.

The forest habitats at GRACE are essential to the gorillas’ rehabilitation, because the forests give them a safe area to hone critical survival skills like searching for and processing wild foods, building nests in trees and on the ground for sleeping, and coordinating group travel. The original, 24-acre habitat constructed in 2015 constitutes the world’s largest gorilla enclosure. In 2018, the second enclosure added 15 acres, for a total of 39 acres of forest habitat. Before it opened, a survey found over 119 different plant species present in the 15-acre enclosure, 85% of which were species known to be consumed by gorillas. 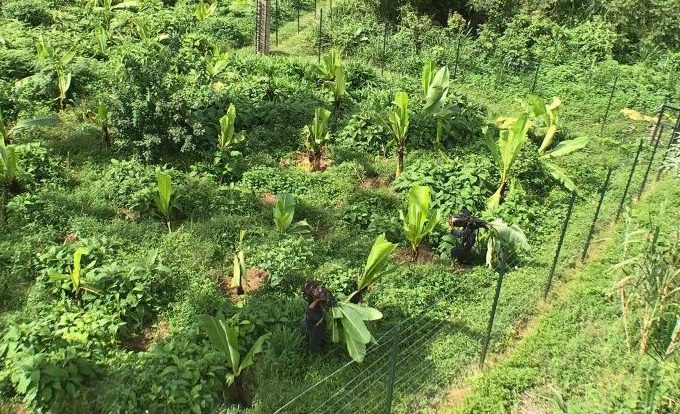 GRACE staff carry banana plants from the farm to the original forest enclosure for planting (2018).

The gorillas forage for the majority of their diet in the forest, but a single gorilla can consume up to around 18 kg (40 lbs.) each day – with 14 gorillas at GRACE, that adds up quickly! To ensure the gorillas at getting proper nutrition, GRACE manages a farm where we grow food to supplement the gorillas’ diet on a daily basis. Part of the farm’s production is also devoted to fast-growing gorilla foods such as elephant grass, bamboo, and banana plants, which GRACE staff use to repair and replant the forest enclosure not being used by the gorillas.

The DR Congo team works hard to ensure the gorillas have a healthy, natural forest habitat worth singing for. As GRACE DR Congo Director Jackson Kabuyaya Mbeke put it, the gorillas’ “singing is not for free! We do reforestation whenever they move to the new enclosure,” which costs money and requires a lot of hard work by the staff. The DR Congo team is already hard at work planning reforestation in the 24-acre enclosure.

But that hard work is worth it, to give the orphaned gorillas at GRACE a second chance to enjoy life in the forest with other gorillas and a chance to learn the survival skills necessary for life in the wild. By the looks of the banana plant, young male Shamavu here agrees!