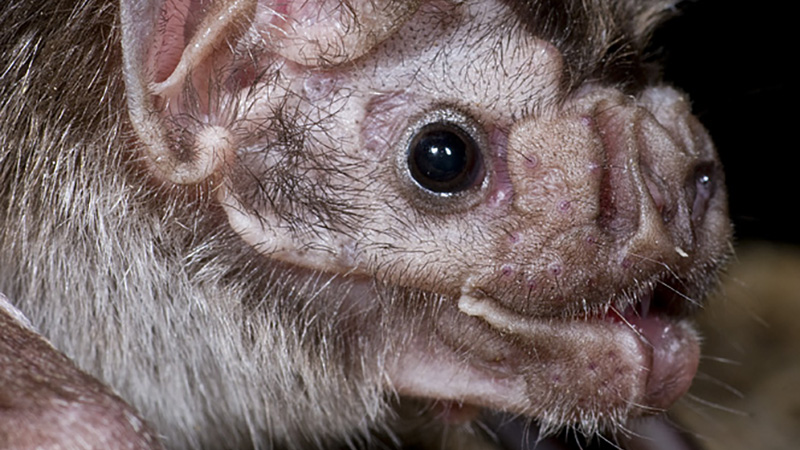 Vampires! Campfire stories and Hollywood alike have provided us with a very striking mental image of what that word should mean. Most people have at least heard of the animal associated with that name as well. But what are Vampire bats really like? Are they as terrifying as the legends would have us believe?

In short, no. Let’s start with size. Far from being massive, terrifying monsters of the sky, vampire bats are actually very small. They’re only about two to four inches in body length, with a wingspan of around one foot. Unlike most bats, at least one species of bat (the Common Vampire bat) is capable of walking, running, and hopping on the ground with its strong back legs and special modified thumbs on its wings.

There are three species of Vampire bat, all of which live in Central and South America. While all three species feed on blood, two of them—the white-winged and hairy-legged Vampire bats—feed mostly on blood from various species of birds. The last one, the Common Vampire bat, feeds on everything from various domestic animals to wild mammals, reptiles, and amphibians. When feeding they will lap up between one and two tablespoons of blood. The process appears to be relatively painless; most animals don’t even wake up while the vampire bat is feeding!

Vampire bats are very intelligent and social animals. They live together in large colonies of both male and female bats. They have also been observed sharing food—an important behavior, as vampire bats can only go about two days without a meal! If a bat has not been able to feed for a night, they will “beg” from a bat who has eaten, and the second bat will regurgitate blood into the hungry bat’s mouth.

Vampire bat saliva is also being researched for possible medical uses. In particular, a chemical in their saliva known as an anticoagulant can be used as a blood-thinning drug to treat medical conditions like heart attacks and strokes. As you watch our colony of vampire bats, located at the Organization for Bat Conservation’s facility in southeast Michigan, we hope you will learn about the truth behind vampire bats!