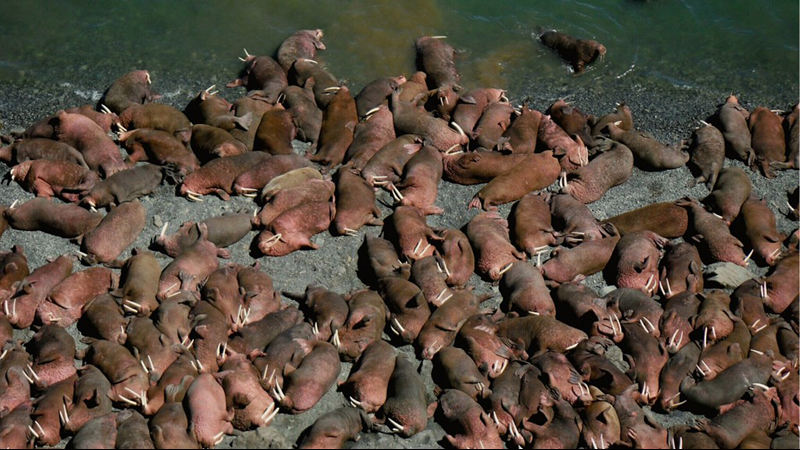 Walruses haul out on Round Island, Alaska. Pic by Ryan Morrill

How Does a Walrus Fit In?

By Margaret Archibald, Alaska Department of Fish and Game

The other day while trying to push our ungainly inflatable boat off the rocks during a falling tide, I noticed two juvenile salmon hovering together near the surface in the intertidal zone. I stopped for a second because, while I’ve worked with salmon for many years, I hadn’t seen one yet this summer. Salmon are the quintessential story of the North Pacific and Bristol Bay, where Round Island is located. The region has the biggest wild salmon runs in the world. Returning to their rivers by the millions each summer, salmon are the brightest, most visible marker of this incredibly productive region, but they are just one part of a massive, dynamic food-web, one that also includes the walrus, sea lions and every other creature and plant on Round Island.

What is the walruses’ role in this food-web? When feeding in Bristol Bay, walruses use their vibrissae (whiskers), forefins and muzzles to churn up and sift through ocean sediments, finding and feeding on the many benthic invertebrates the seafloor has to offer. As a walrus moves along the sea floor to feed, it creates a cloud of disturbed sediment and leaves behind it a bonanza of previously buried nutrients newly available to smaller foragers. Even walruses’ highly specialized technique of sucking bivalves from their shells leaves enough protein behind in each shell to feed many other small animals, including fish, invertebrates and zooplankton. This important role of the walruses on sea-floor micro-habitats is part of why they are considered a keystone species in the arctic portions of their range. A male walrus may consume 500 to 1000 pounds of invertebrates in a 5-6 day bout of feeding, and while a lot of those calories are converted into energy immediately or stored as muscle or blubber, a great deal of nutrient-rich fertilizer is redistributed through the microbiome when the walrus exhausts it as feces. This happens both in the water column and on land at the haul-outs. It would be difficult to guess how many pounds of these seafloor nutrients come ashore during a single walrus haul-out season at Round Island, but judging by the “brown tide” we see on sunny days during strong tide cycles, it must be significant!

In summer, male walruses migrate south from the ice edge to beaches of Bristol Bay, where the warmer air and sunny days help them molt. While seeming to idly rest on the beach, they are actually pumping their blood outward from their core to generate new skin cells. Lolling around on the rocks helps the walruses to scratch off their old skin and hair, leaving a noticeable red stain on the beach, drifts of course, short hair and a strong smell in all their favorite lounging spots.

And so the walruses also bring nutrients to the flies, algae and insects on the beaches and the small animals in Round Island’s intertidal zone, which in turn feed shorebirds. At high tide, walrus scat, molted skin cells and decomposing hair flow back out to the bay where larval fish and zooplankton eat them. These creatures feed small fish, which feed the seabirds that nest here. The seabirds, in turn, feed foxes, eagles and ravens, all of whom bring more nutrients in the form of scat, carcasses, eggshells and bones to the hillside grasses and plants of Round Island. On shore, the fertilized flowers, berries and seeds feed all manner of birds, rodents and bees. Everybody is connected – and with all that food going around, why wouldn’t a pair of young salmon stop by?

We almost never think of walruses and salmon in the same sentence. Or at least I don’t. Their lives are very different, and while parts of their ranges do overlap, neither predates on the other and they do not compete for food resources. And yet they are tied together. Adult salmon spend years out at sea collecting free swimming nutrients from the water column and building them into strong healthy salmon bodies that come into Bristol Bay every summer by the millions of pounds. The annual salmon run creates an explosion of food for predators big and small, spreading those mid-ocean nutrients from Bristol Bay itself all the way to the lakes and headwaters of dozens of rivers and streams that empty into it. These salmon nutrients, in the form of their decomposing or digested and divided bodies, become grasslands and forests, baby eagles, seals and bears. They also become rich stream habitat for juvenile salmon and healthy diverse, seafloor ecosystems, bursting with seafloor invertebrates that walruses stir up and eat. The salmon, famously, both depend on and create the diversity they depend on. And so do the walruses. Each of them is a knot in the web that ties all the creatures in Bristol Bay together.