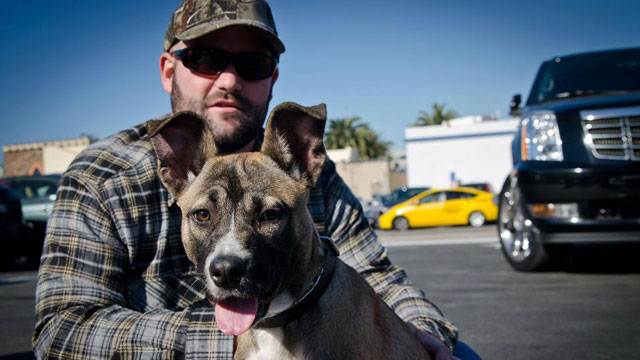 Honoring Our Veterans: Your Stories

We asked in our newsletter who you’re honoring this Veterans Day, and were touched by your responses. In recognition of the brave veterans you’re honoring today, here are some of the stories you sent in:

Irene Chansawang: “Honoring the bravery of Chris Bollinger, who served in Germany and Iraq. He is a loving dog-dad to Cheyenne and a loyal, trustworthy friend.” [see photo above]

PJ Love: “I could honor many in my family who served this nation during WWII, and my husband’s father who served during WWI, but I would like to specifically
honor my father James Otto Kelly who, at the age of 36 and with 3 small children volunteered to serve. He was in the Navy and stationed on the island of Okinawa.
Thank God he came home safely to us. My brother still has a knife that saved our father’s life during one attack. God Bless all who have helped protect this Great Nation.”

Meta Pierce: “I come from a family that has had many, many servicemen over the years.  Today I honor first my husband, who never saw fighting, but volunteered to go during Vietnam, and Desert Storm, but was given orders to go elsewhere. My nephews, one is a lifer in the Navy and is now stationed in Japan, another in Texas Army National Guard who has been to Iraq and Afghanistan, and another who was in the Air Force for several years. My father-in-law who fought at D-Day as an Army Tanker, his brother who died as he was going ashore for the first time in a fight in Paris, and one of my uncles that the exact same thing happened in World War II. Also my son-in-law who served in the US Army and served in Iraq, and Afghanistan.”

James Widdeocombe: “Today, like the other 364 days of the year, I honor my father. He was a veteran of WWI. He served in several battles in France. He was assigned to the 30th Eng. Bat. Co. B First Gas Regiment. Also known as “The Hellfire Boys” Chemical warfare. On March 18, 1918 he was wounded with mustard gas. After 85 years my family finally convinced the government that he deserved a purple heart and other medals that they had never given him. After being discharged from the Army in 1918 he then enlisted in the U.S. Navy for two more years. Although I follow in his footsteps as a veteran, my father stands tall and proud miles ahead of me.”

Anne Rich: “My grandson has joined the American army and I could not be more proud of him, he has passed everything he has trained for, got his wings, and still wants to learn more. He is said to be going to Afghanistan in January. I worry, but it is what he wants to do. I pray every day for him. God willing all the veterans will be safe.”

Want to tell explore.org who you’re honoring today? Email us at feedback@explore.org.