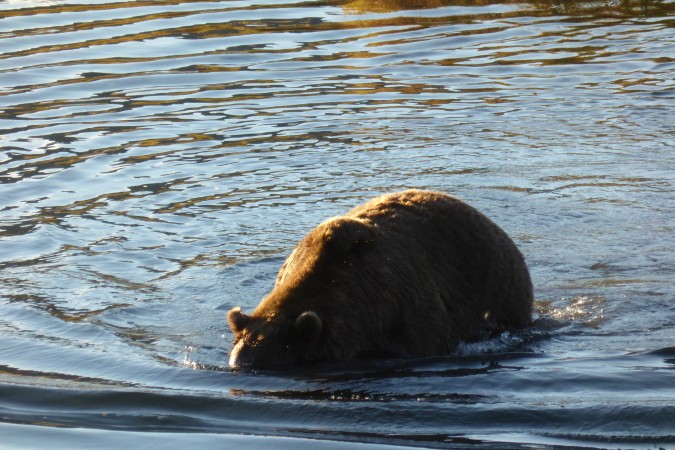 To catch salmon in Brooks River, brown bears employ many different fishing techniques. Most simply, they wait, sitting or standing in one spot while salmon come to them. When particularly hungry, they’ll chase fish, especially in early summer when the salmon first arrive. A few bold and assertive bears will attempt to steal fish from others, a risky but sometimes profitable venture. Brooks Rivers bears, however, use one fishing technique universally when the season is right. Efficient and effective, snorkeling is one of the best strategies to scavenge fish.

In late summer and early fall, Brooks River’s sockeye salmon spawn in earnest. As semelparous fish, this will be their last task; they can only spawn once and die afterward. Most salmon in Brooks River spawn in the river’s middle and upper reaches where the current is strong enough to carry dead and dying fish downstream. Many of those fish drift to the lower Brooks River, a place of deeper water and slower currents. Here, the weakening current drops carcasses to the stream bottom.

The rigors of migration and spawning are so intense that spawned-out fish contain about half the calories as a salmon fresh from the sea. Dead, spawned out fish aren’t worthless though. They are an important food source for bears looking to gain as much weight as possible before entering hibernation. Therefore, it behooves bears to search for dead salmon as efficiently as possible. This is when snorkeling becomes most valuable.

To snorkel, bears stick their faces in the water and visually search for fish lying on the bottom or trapped against logs, rocks, or vegetation. After all, dead fish don’t come to you. When snorkeling, bears are scavenging more than fishing. Bears who know where and when to snorkel can find and eat dozens of dead fish per day.

For an animal that must eat a year’s worth of food in six months or less, survival requires efficient foraging. If one fishing strategy isn’t productive enough, then bears will turn to another. Waiting for fish at Brooks Falls becomes less worthwhile when salmon begin to spawn in large numbers. Faced with an abundance of dead and dying salmon over a widespread area, snorkeling provides Brooks Rivers’ bears with an effective and efficient strategy to find food. And, it shows us another example of their ability to adapt to changing conditions.