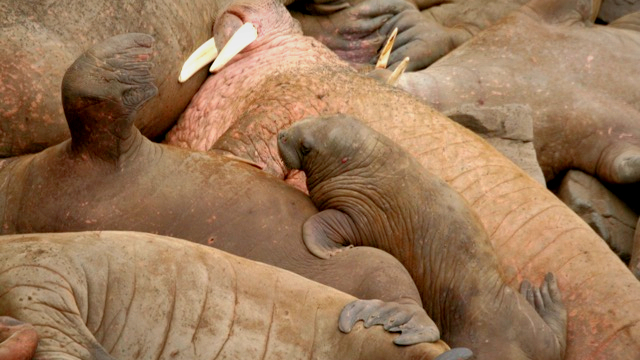 Little Chubby on the walrus pile.

Chubby the Walrus is a Fish out of Water

Alaska Fish and Game staff Diane and Brian Okonek are treasure troves of wild and unusual experiences on Round Island, Alaska, home of the explore.org Walrus Cam. Diane tells the tale of Chubby, a young walrus out of place on the island’s beaches.

“When we arrived at Round Island a few years ago, the first thing we heard was a loud bawling sound coming from First Beach. We ran over to see what it was and were surprised to find a very young walrus among a big group of mature males. A walrus this young would normally be with his mother for another 2 years and she would be fiercely protecting her young one. They’re usually weaned throughout their second year and small tusks can be seen protruding. This calf had no sign of tusks so I would estimate he was between 1 and 2 years old.

In seven summers on Round Island I have never seen another walrus this small. He was a little butterball and the nick name “Chubby” stuck. He was the highlight of our summer and gave us an interesting opportunity to observe the behaviors of not only Chubby, but those of the males that interacted with him.

Chubby would often stay very close to one of the biggest males but not always the same male. We routinely saw his “chosen” protector of the day raise up, roar and threaten another male with a tusk display if they came too close to Chubby. Chubby seemed very aware that he could be crushed and would wail like a very loud baby anytime males around him started to roll around. Otherwise he would crawl on top of a big male and sleep on a nice soft belly. The other males seemed to welcome him aboard.

The biggest thrill was when I looked up while doing trail work in the campground and saw Chubby getting a ride to Main Beach on top of a very big male. The male was swimming very slowly and I could clearly see Chubby’s tiny flippers grasping his back. If another walrus swam by Chubby’s escort, they would take a detour to the outside and stay well away. They were going along slowly enough that I could walk along the campground trail and document the event directly below me.

Chubby catches a lift on top of an older male.

Chubby was back at First Beach in a few days and we continued to see him almost every day until we left in mid August. We had so many questions that we could never answer. How was he able to migrate at such a young age, what happened to his mother, how was he able to get enough to eat, why did other males seem to protect him, did he ever come back to Round Island?  We hope he has grown into a handsome teenager by now!

Keep your eyes out on the video cam for these little guys.  I would love to see pictures if you find one.  Chubby is out there somewhere!