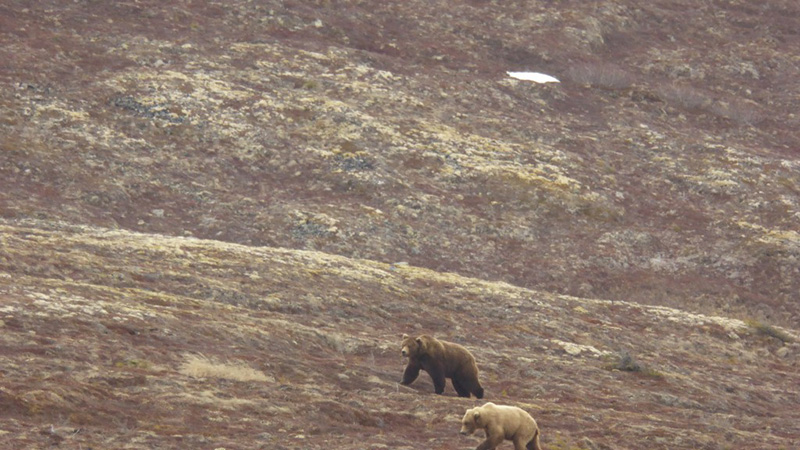 After a long winter, Katmai rouses in March and April. Daylight lengthens as the sun creeps progressively higher in the sky. Thaw weakens ice on ponds, lakes, and rivers. Flower buds open on willows, monopolizing the attention of queen bumblebees. Migratory songbirds begin to arrive and hibernating animals stir in their dens. Spring is a season of renewal and change. For brown bears especially, it is a time of metabolic, physiologic, and familial transitions.

Katmai’s brown bears greet the oncoming spring while still hibernating. Most are still in their dens throughout March. They’ve eaten nothing, drunk nothing, and have not urinated or defecated in months. Hibernation allows bears to survive winter, but it is a starvation diet that drains most of their fat reserves. Most bears commonly lose one-quarter or more of their fall body weight while in their dens. Maximum daily weight loss for lactating females can approach a half a kilogram per day.

Besides a complete shutdown of their digestive track, the body temperature of hibernating bears drops 8˚-10˚C from their active temperature, 37˚-38˚C, and their heart rate decreases to as few as 10 beats per minute. To become fully active once again, bears need many weeks to slowly shift their physiology from one of rest and energy conservation to fully woke and ready to meet the demands of a new year.

The shift begins long before bears begin to stir. A long-term study on wild brown bears in Sweden found that body temperature began to rise two full months before bears became active and didn’t reach normal levels until ten days after emergence. Bears became active in the den between one and two weeks before emergence, but their heart rate didn’t normalize for a month afterward. The slow heart rate and slightly depressed body temperature after they emerge seems to correspond with a physiological phase described as “walking hibernation” when bears have little or no appetite for up to two weeks after leaving their den. A bear fresh out of the den isn’t yet primed for the active season. It’s still getting ready.

These changes probably initiate sooner in adult male bears, since they have the shortest denning period and typically exit the den before females. Mother bears with cub-of-the-year remain in the den longest and may not emerge until mid-May. Once bears exit the den though, other seasonal demands are just ramping up.

Bear families break up and new ones are made. Mother bears and older cubs separate in spring. Once emancipated from mom, subadult bears must find their own home ranges. Subadult males typically wander much farther than subadult females, sometimes moving dozens of kilometers away. Around this time, single adult bears begin to focus on mating. In mid to late spring, adult females enter estrus and testosterone levels increase in males. Both cycles peak in June, the height of the brown bear mating season.

The first bears we’ll see on bearcam will be far leaner than the fatties of fall. All will have undergone significant biological changes to wake from hibernation. Some will have just experienced emancipation from their mother. Single adults will be primed for the mating season, while mother bears will be focused on feeding and protecting their cubs. In more ways than one, bears in spring illustrate the season’s transitions.