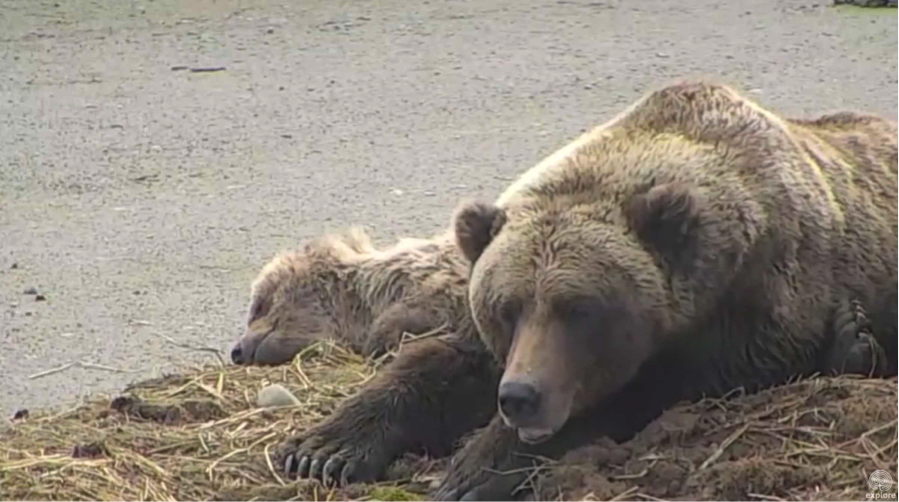 “For me, one of the most unforgettable bearcam moments is also the most poignant. On October 21, 2015 bearcam viewers watched one of 451’s spring cubs stumble and fall to the ground. Two days later, with its mother and surviving sibling nearby, it died. This screen shot captures 451 resting near her dying cub.

When I first took note of the situation, I simply saw a mother bear resting near her cub and did not note anything unusual. After scanning the cam’s comments and witnessing the cub’s prolonged lethargy for myself I soon realized this was anything but usual. None of us, bearcam viewers and park staff alike, had ever seen anything like this. (Necropsy results later indicated the cub likely died from canine adenovirus.)

To be very clear, this isn’t a “favorite” moment of mine. I take no pleasure from watching animals suffer, but the cub’s plight was one of the most surprising, interesting, and meaningful situations I ever witnessed.

Images and videos from this time conjure a wide variety of thoughts and emotions. These are a reminder of the empathy viewers expressed for the cub and 451. They’re reminiscent of the frustration people felt knowing they couldn’t or shouldn’t help. In a sense too, the footage and screen shots illustrate the public’s generosity (the situation later spurred over $10,000 of donations to support brown bear research at Brooks River). They also remind me of 451’s patience and vigilance and the important insights that led us to discover more about a potentially deadly wildlife disease. These are images of nature in the raw, a real and uncensored view of bear life, and why I consider this to be one of bearcam’s most memorable moments.” – Mike Fitz

If you would like to submit your own brown bear story, please submit here!