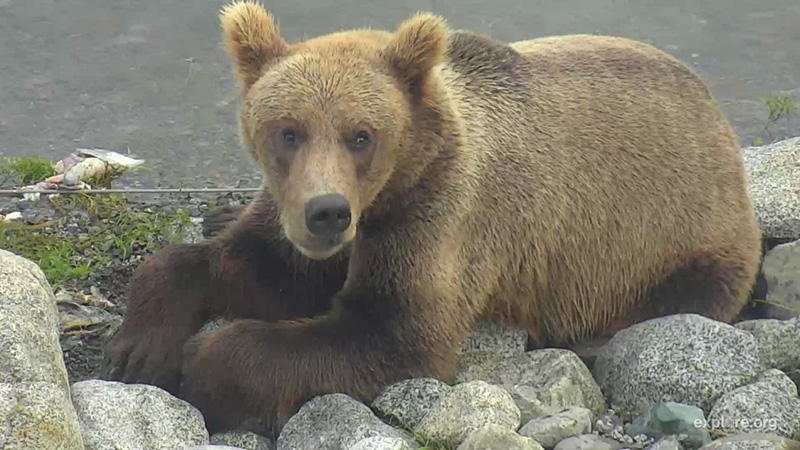 The month of June might allow Brooks River’s bears their first opportunity of the year to catch and eat salmon, but this month also marks an annual event even more important than their first meal hearty fish dinner. June is the peak of the bears’ mating season.

A male bear uses his keen sense of smell to locate prospective mates. He’ll then “court” a female by following her until the she is receptive to the male’s advances. On the bearcams, you can recognize this behavior when you see a larger bear persistently following a smaller bear. The size difference between male and female bears can be dramatic, as male brown bears are sometimes twice as large as adult females. 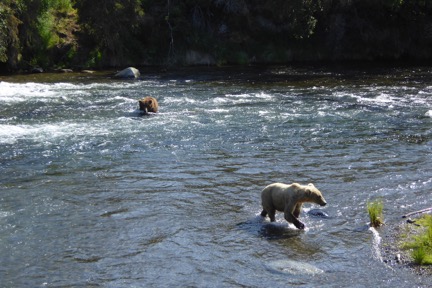 Male bears follow eligible females persistently during the mating season, as demonstrated by 747 (upper left) who was seen courting 128 Grazer in June 2015. 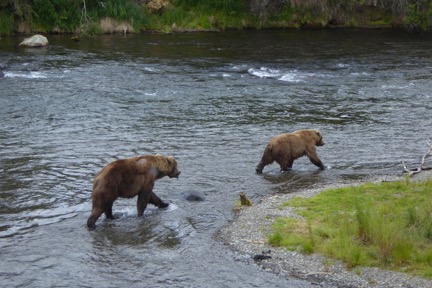 Initially, the female bear may not be so keen to have a larger bear following her. After all, for the rest of the year the male bear will be a competitor. (I’ve even seen “courting” males steal fish from their potential mates!) Over time though, the female bear habituates to the male, allowing him to approach closer and closer. This courtship process can last minutes or extend for nearly two weeks, depending on the couple. After mating, the bears may play or lounge together, but usually go their separate ways. Female bears go through several estrous cycles in late spring and early summer too, and can mate with multiple males. 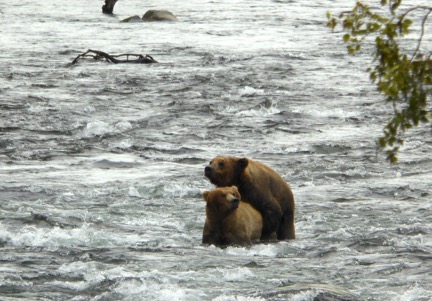 Bears will copulate anywhere the time is right.

Over the past few days at Brooks River, one of the area’s most dominant bears, 856, has been incessantly following the adult female 409 Beadnose. 409, many bearcam viewers may remember, raised two yearling cubs last summer, and she was seen with them earlier this spring. Now however, we know she has emancipated her cubs and is once again single. 856, perhaps more than anyone, knows this as well, and his proximity to Beadnose reveals his amorous intentions. 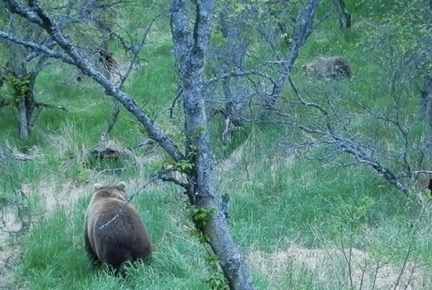 Unlike many other organisms, male bears do not attempt to attract the attention of females. They only guard their access to her, and will sometimes do so even as they risk significant injury in a conflict with another male. In June, if we see an adult male like 856 return to the river with injuries of a recent origin, then it’s quite probable he was injured in a fight with another male over access to a female. (Although I don’t know for certain, I suspect this was the source of 814 Lurch’s injuries in June 2015.)

For male bears, the courtship process is one of patience, persistence, competition, and sometimes violence. For females, the mating season isn’t as fraught with as much risk, but they still experience strong hormonal changes associated with their biological clock. The powerful urge to reproduce manifests itself only briefly among brown bears. Courting is not observed in early spring, late summer, or fall, so when bearcam goes live later this month, watch closely for courting bears. Salmon won’t be the only thing on their minds.