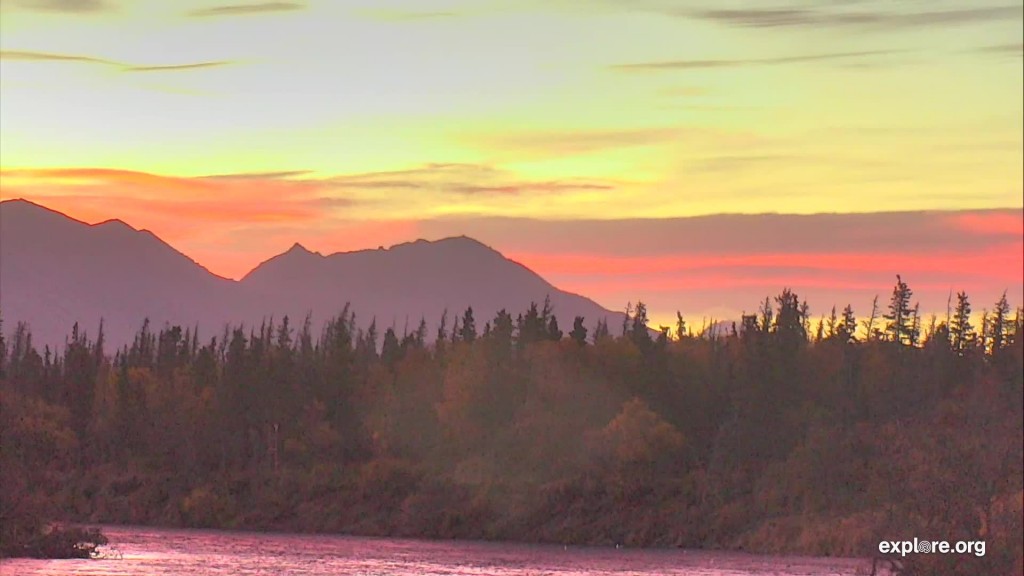 Greetings from Fat Bear land!  We are in the middle of the Annual Fat Bear Week tournament, pitting some of our favorite fat bears against each other in voting competitions that will ultimately crown a 2018 Fat Bear winner on Tuesday, October 9.  Katmai’s Rangers have organized this fun contest and daily match ups are voted on by liking your favorite contestant on Katmai’s Facebook page.  Keep up with the results on Facebook or in the comments on Explore.org Brooks Bear Cam pages.  Join the fun by campaigning for your Fat Bear Choice or making and posting campaign posters! 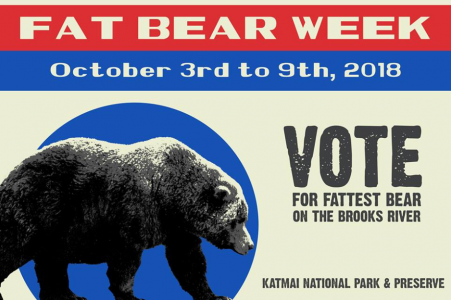 While you’re waiting for the Fat Bear Champion to be announced, you can take this quick quiz to find out which of the fat bear contestants you would be.

We’re still seeing plenty of bears on the cams this week.  Many great views of sows and cubs fishing, playing and resting on the Lower River cams.  Also seeing some of the adult males snorkeling and sleeping around the Lower River area. Underwater cam continues to give super close up views of the spawning color and shape of Silver and Sockeye salmon and the bears who are swimming and diving to get the dead and dying salmon.  Watch explore’s weekly recap video for highlights.

Sow 451 and her three yearlings gave us some wonderful views on Wednesday, when they napped, nursed and played near the Lower River Platform.  We saw the great bond between a mother bear and her cubs. We also got a wonderful look at how this family has not only survived but thrived this season.  Early in the summer when we first saw 451 and family, we were surprised at how thin and small she and her yearling cubs seemed when compared to some other moms and cubs.  When they returned to the river this fall, the difference was amazing and heartwarming to see, as both mom and cubs had fattened up remarkably. Short video of their time together on Wednesday can be seen here. 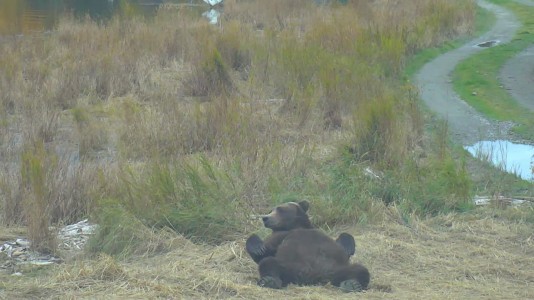 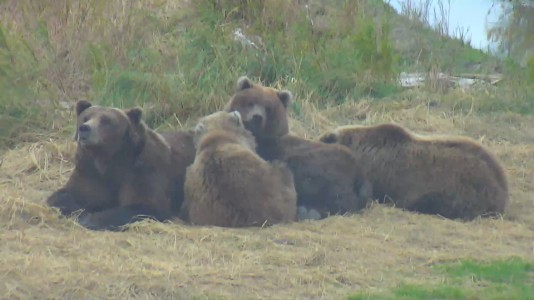 451 and yearlings napping Snapshot by Shel_

For viewers who have followed the cams for several years, 451’s history makes us appreciate this years family even more.  451 suffered some sort of injury to her rear leg or paw in 2014. At first she could put no weight on it. She has persevered and recovered to be able to care for 2 sets of cubs since then, although she still has a definite limp.  In 2015 she appeared with 3 spring cubs. By early fall, one of those cubs had disappeared. Then in late fall, a second cub became ill and disabled while the cams were watching. For two days we watched 451 and her remaining cub remain by the side of the dying cub.  When the little cub finally died, 451 still remained nearby, only leaving after the cub was collected by Rangers for necropsy. The death of the cub was hard to watch, but gave us an understanding of both the harsh reality of bear life and the strong maternal bond between a sow and her cubs. When 451 returned the following spring, the third cub was no longer with her either.  So this year’s 451 family success is even more special to see. 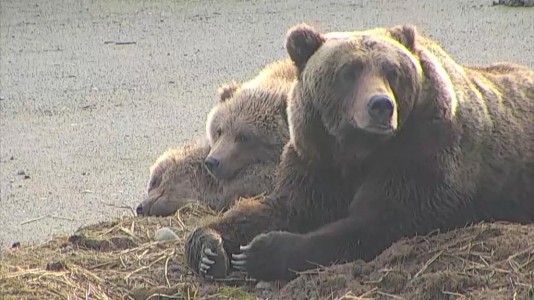 We got a good look at bear 879 this week at the falls. Should this bear ever decide to come to Brooks in the spring as well as fall he’d be a serious contender for Fat Bear Week! 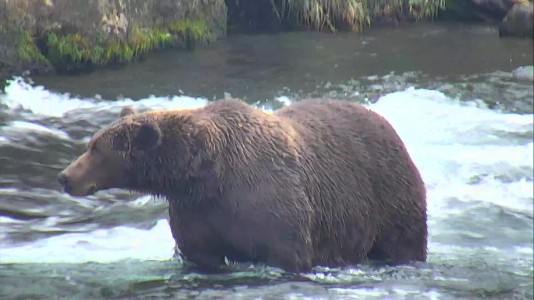 879 at the falls Snapshot by Cam Op Nan

83 Wayne Brother looked oh so cute and large when he decided to rest on the island. You could really see his scar or rump bump as chatters call it from when he and 747 got into a fight a couple years ago. This scene brought back memories of 32 Chunk doing the same thing last year 🙂 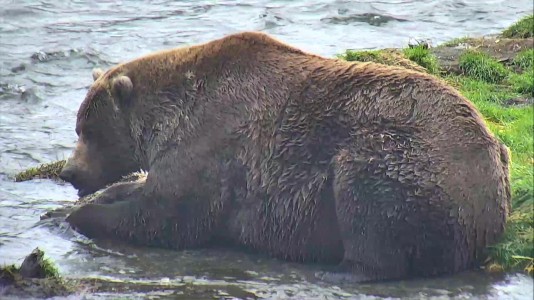 480 Otis has been a fixture on the Lower River this week.  He’s been seen about every day at some point slowly moving through the water with his head partly submerged, snorkeling for salmon.  He’s had good success and we’ve often seen him enjoying his catch. One day, we observed Otis enjoying a fish, another bear napping half in, half out of the river behind him and a sub adult Bald Eagle sitting on a piece of driftwood all in the same frame.  A fish jumped from the water, gulls swam around looking for scraps and altogether it was a beautiful fall scene showing some of the other wildlife along with the bears. 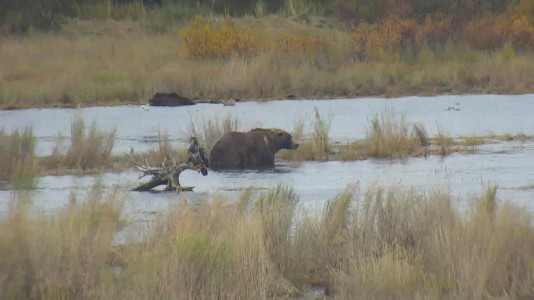 480 Otis and a juvenile bald eagle Snapshot by Niteflight2112

On one of his snorkeling excursions, Otis had an audience observing his progress through the river.  435 Holly and her cubs were resting on the closed trail and noticed Otis coming closer. When Otis unintentionally got too close, Holly and the cubs rose and moved away slightly, although there was no threat from Otis. 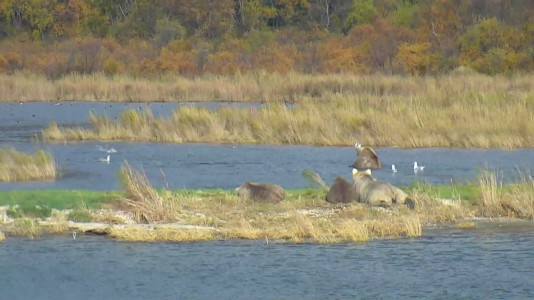 We also had nice views of the Holly family out on the spit.  Her cubs napped while she snorkeled for fish. 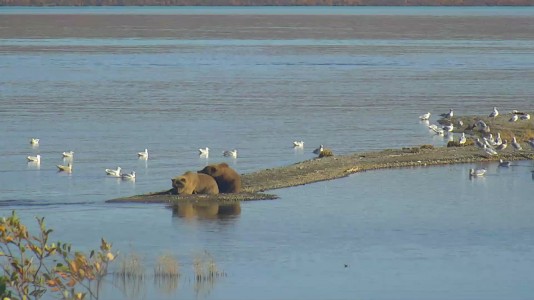 Along with the young Bald Eagle seen in views of Otis, we have been seeing other juvenile or sub adult eagles and some adults as well.  One sub adult was seen scavenging scraps on the island near the falls. 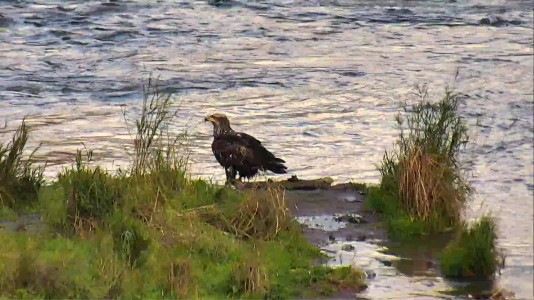 Juvenile bald eagle on the island Snapshot by SandraTaylor66

402 and her 4 coy (cubs of the year – aka spring cubs) were seen a few times this week.  We had really great views of them when they spent some time on and around the Spit Road area near the Lower River platform.  The curious cubs investigated a water puddle and interesting things (whatever they were) in the tall grasses, while their fans got some great photos. 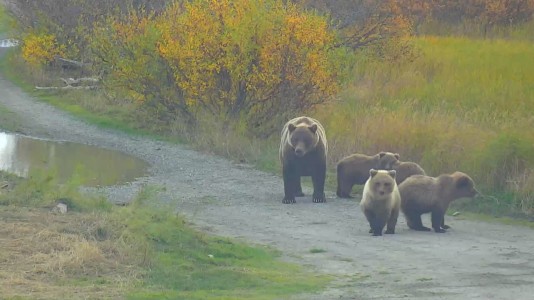 Bear 273 returned this past week looking  quite plump. Wherever she has been it’s certainly a productive fishing spot. Who knows, maybe next year she will return with spring cubs. 94 and coy also spent  quite a bit of time on the grassy point giving cam viewers cute pics of her and the cubs. She is also a frequent snorkeler near the underwater cam. 94 and her three coy were seen swimming by the cam twice this past week. 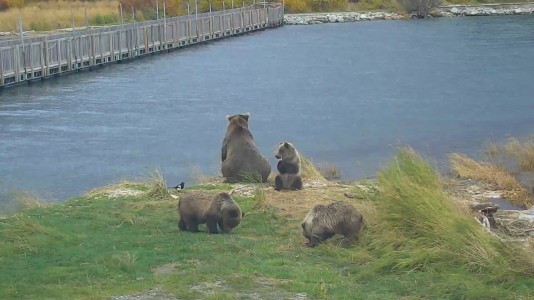 94 and coy Snapshot by DTB 94 and coy swim by UW cam Snapshot by Brenda05 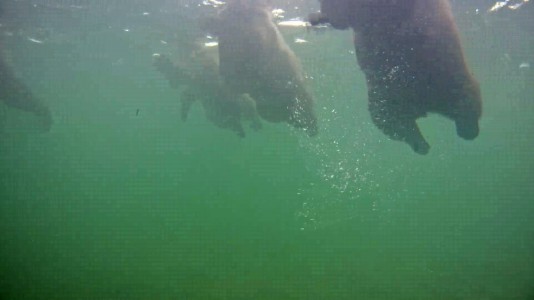 Earlier this week viewers were treated to an infrared view of the falls when the IR light was turned on. There was even a bear that was see climbing the falls. 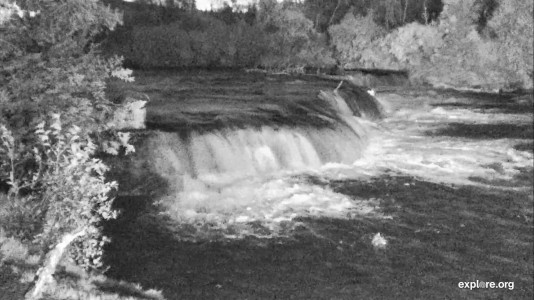 Falls lit up with IR light Snapshot by LaniH