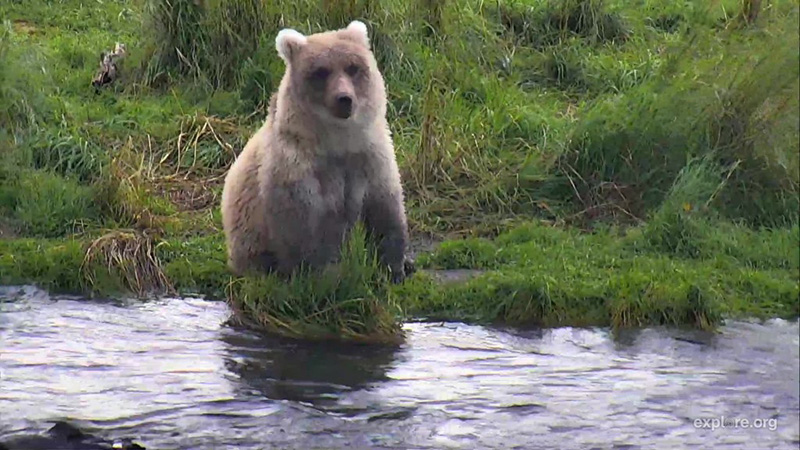 This week saw the return of two enduring favorites of Brooks River Bear Cam fans:  Male 480 Otis and Female 410.  Both bears had been absent from view for a period of time, probably fishing in another area where the fishing was easier, or perhaps partaking in berries or other food sources.  480 Otis walked into the falls like he’d never been gone, resuming his favorite position in the office area against the far side wall of the falls.  He is continuing to show how well he practices conservation of energy by napping and sleeping at night on the island and also seeming to nap during the day sitting in the office. 480 is around 20-21 years old, missing a number of teeth and still managing to become a very “fat” bear.  Never one of the couple of very dominant bears, he did used to have a place of dominance and was only displaced by the most dominant bears.  Lately, with age, he has become less dominant and does get pushed around from fishing areas more frequently.  Interestingly, this week, we did see him assert some dominance and reclaim the office from a larger bear. The larger bear (possibly 879) had claimed the office by moving 32 Chunk away just previously.  480 Otis then walked into the office area, seemed to growl and complain to 879 and finally turned his ample back side toward him and backed his way up to the wall close enough to 879 to cause 879 to become uncomfortable and walk away. 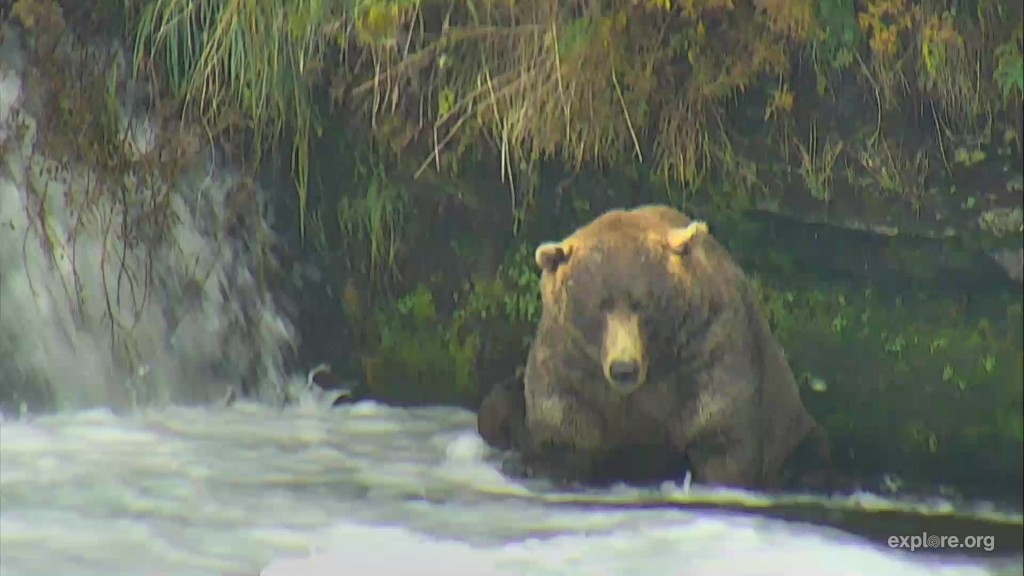 Female 410 was the other welcome “old timer” to be seen.  At 28 years old, she is the oldest known female to frequent Brooks River.  She is known to be one of the most human habituated bears to use the river.  We have seen her plop down for a nap in busy places – like next to the ramp leading to the Lower River platforms –  and remain there for long periods of time  The Bear eBook reports that she’s been observed near equipment and people often.  She fishes the falls and the Lower River area.  It’s likely we’ll see her sleeping out on the spit for long hours.  No worries – she’s fine.  She’ll roll over or raise a paw occasionally to let cam viewers know she’s okay.  🙂 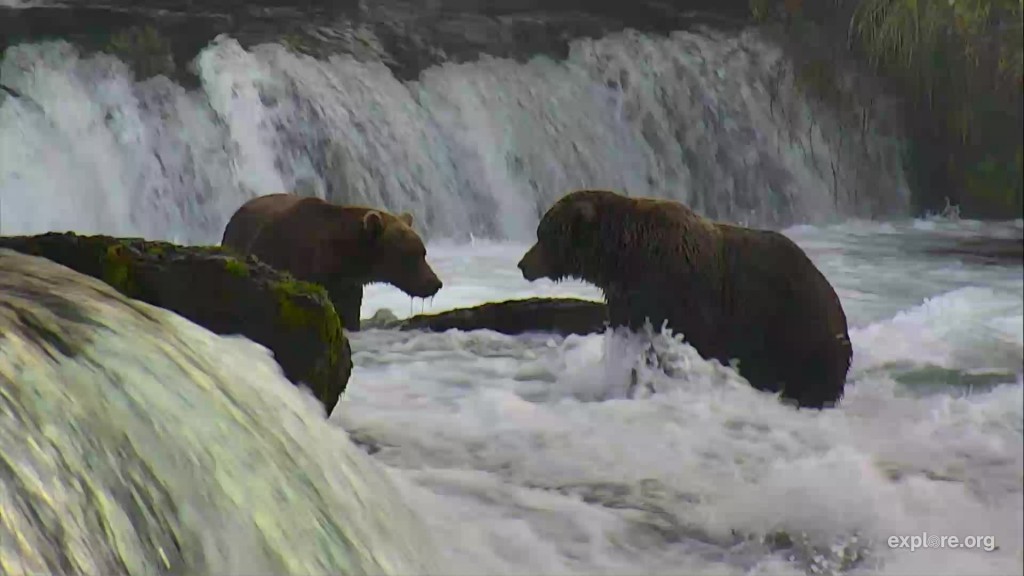 435 Holly also returned this week with her two COYS (cubs of the year). When we had last seen them her cubs were so tiny and both black in color. Upon their return her cubs are cute little fluff balls one has remained dark in color while the other cubs had taken after 435 Holly and has lightened up quite bit. Cam viewers were treated with an up close look at both cubs as they investigated the bridge gate.

Chunk also returned to the falls this week.  Since 747 showed up last week, there had been much anticipation of 32 reappearing.  32 had seemed to have assumed the role of most dominant bear on the river this summer with the absence of 856 and 747.  However, when 747 arrived, he seemed  to behave as a very dominant bear, often moving other bears out of the falls area.  When 32 returned, 747 continued the same behavior.  32 did not challenge 747 for the dominant position.  He gave 747 a fairly wide berth and has been seen to leave fishing areas when 747 approaches him.  They may have exchanged some growling and posturing on Thursday September 7th’s PBP, but once again 747 walked away indicating he thinks he is the most dominant.

An unknown bear has also been making an appearance at the falls, Ranger Dave thinks it could be 474 who is a bear only seen in the fall. 151 Walker and this bear had an altercation in the far pool when the possible 474 wanted some of the salmon 151 Walker had just caught. He crept closer to 151 eating on table rock and finally ended up with some scraps when 151 dropped them to growl at the possible 474.

128 Grazer had a busy week at the falls getting into quite a few altercations with other bears. She chased bear 68 out of the jacuzzi, and charged 747 as he came down the far river bank to enter the falls. She also “grazered” 719 not once but three times. The first on top of the falls and the other two were while both were in the far pool. The second time she didn’t relent and backed 719 almost all the way down to the end of the island, video can be seen here. 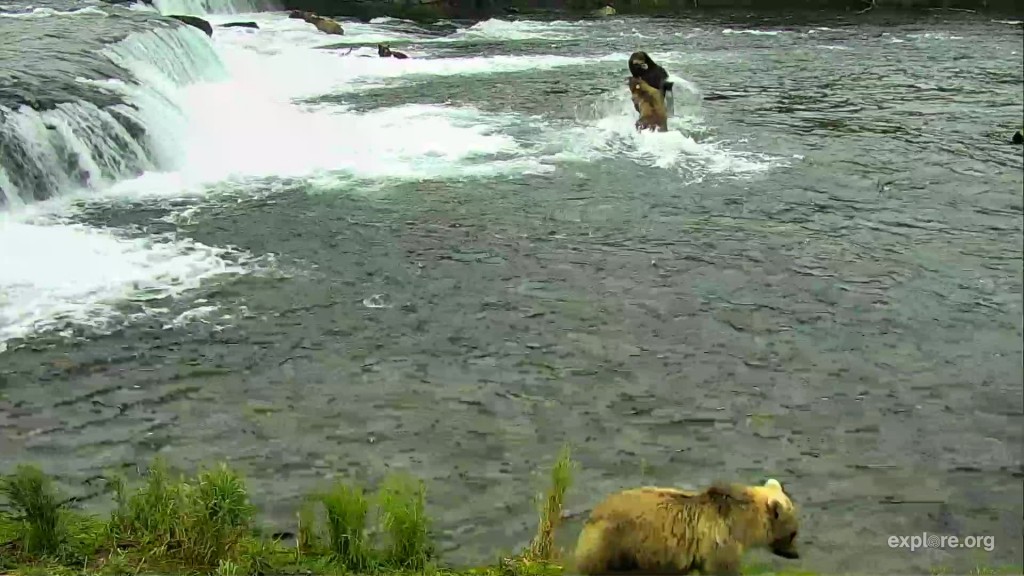 128 Grazer charges 68 to move him out of the Jacuzzi 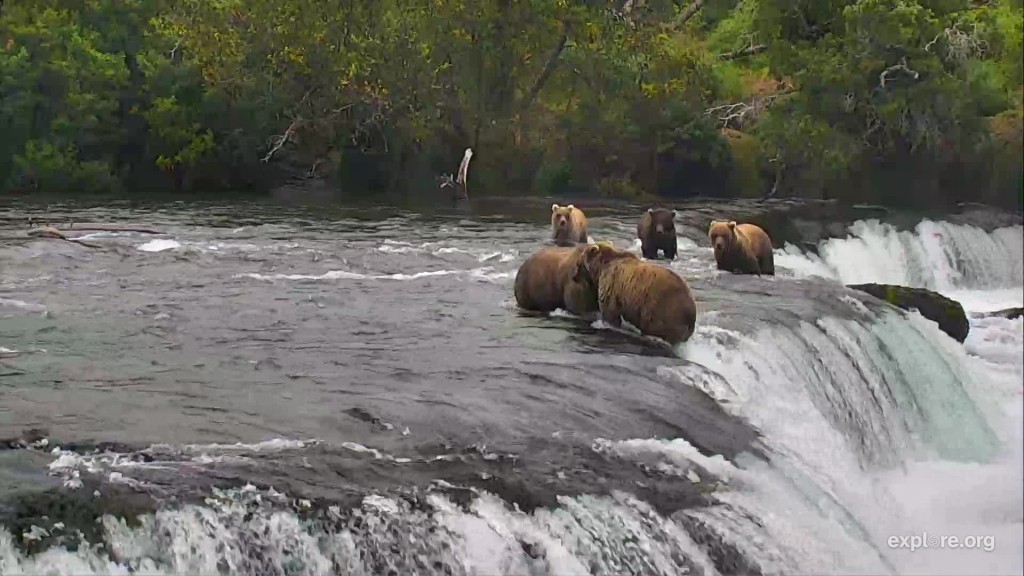 128 Grazer also had an incident with who chatters have affectionately called the little lip fisher subadult. The subadult was on the lip when 128 Grazer and cubs climb the fish ladder and 128 wanted to fish the lip. The little subadult would not relinquish her spot. 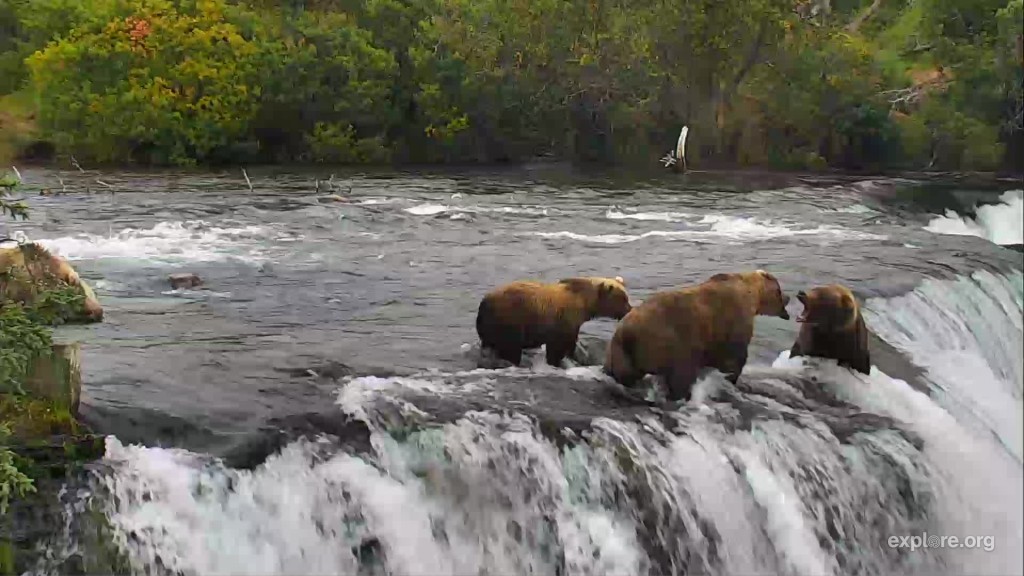 128 Grazer kept moving forward and backing the subadult up until the subadult fell off the top of the falls into the Jacuzzi where bear 68 was fishing. 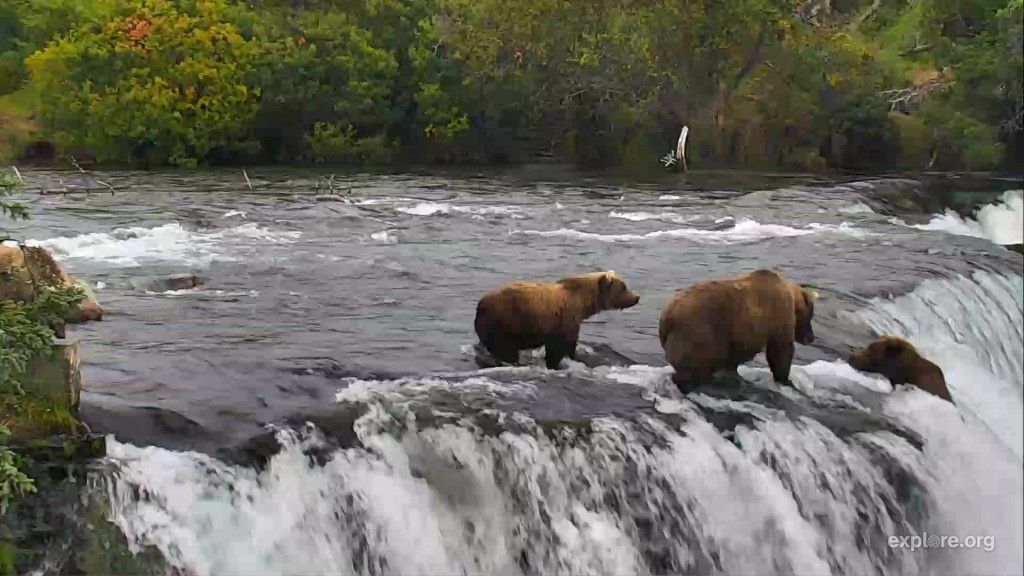 Subadult slips off the falls

We didn’t see what happened in the Jacuzzi between 68 and the subadult, but the little subadult was seen along the bank of the river a little while later looking just fine. 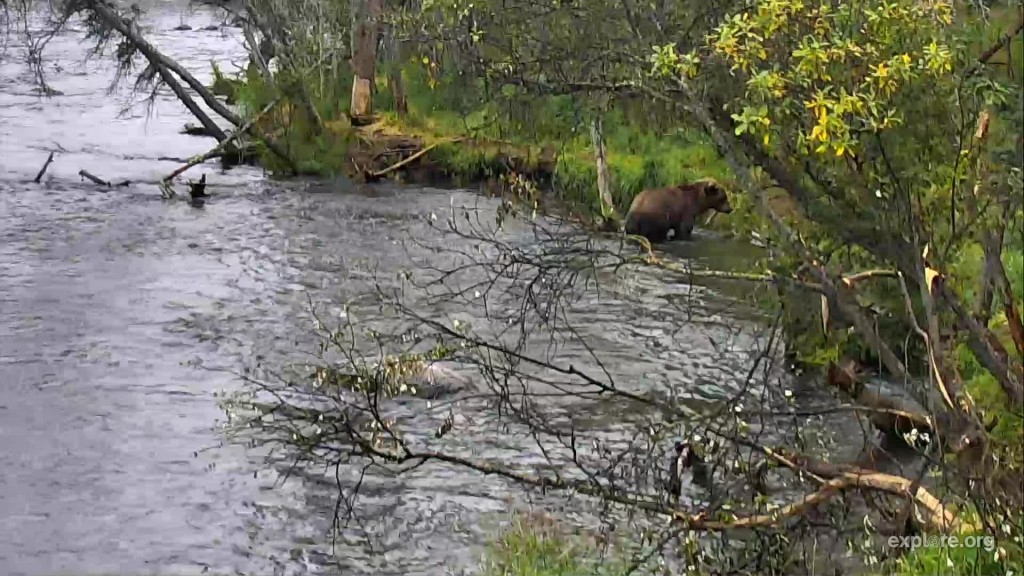 Subadult that fell off the falls is fine

We are still seeing a high number of bears using the falls area.  This seems a little unusual for this time in September.  Ranger Dave says this can possibly be attributed to a longer than usual Sockeye Salmon run, and a large Silver Salmon run, allowing the bears to fish for live, vibrant, high fat fish and not yet moving on to feeding on the less nutritious post spawned salmon as we usually see in the fall. We are sometimes seeing 8 or more bears at the falls in the evening.

480 and 410 are not the only bears napping a lot lately.  We saw 32 Chunk, 68 and 747 also not wasting any unnecessary energy by napping (or trying to nap) right in the river.  747 found a rock pillow for his head, but 68 seemed to hope that the water might support his head and ended up blowing bubbles as his head repeatedly dropped into the water while he appeared to be trying to nap. 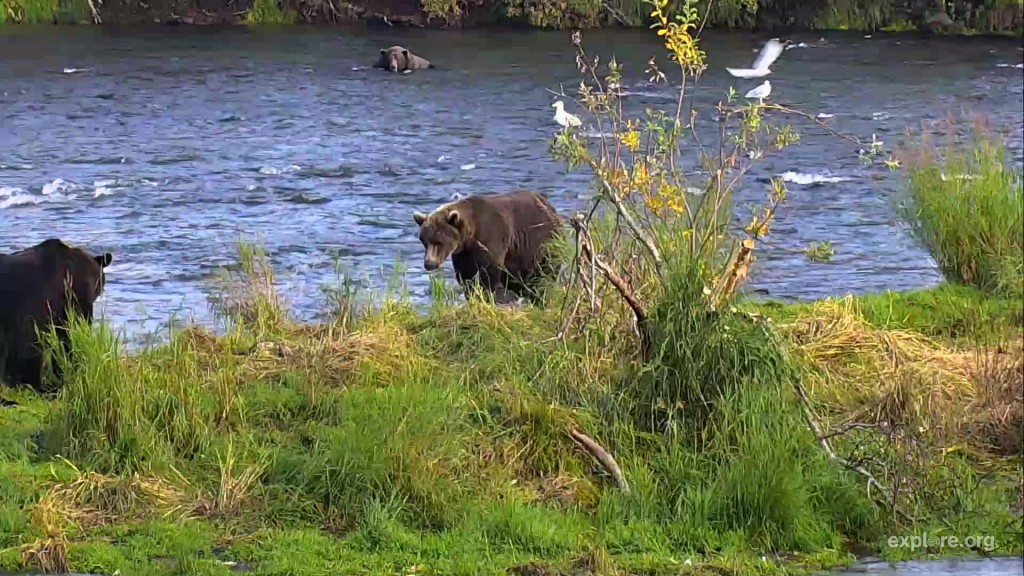 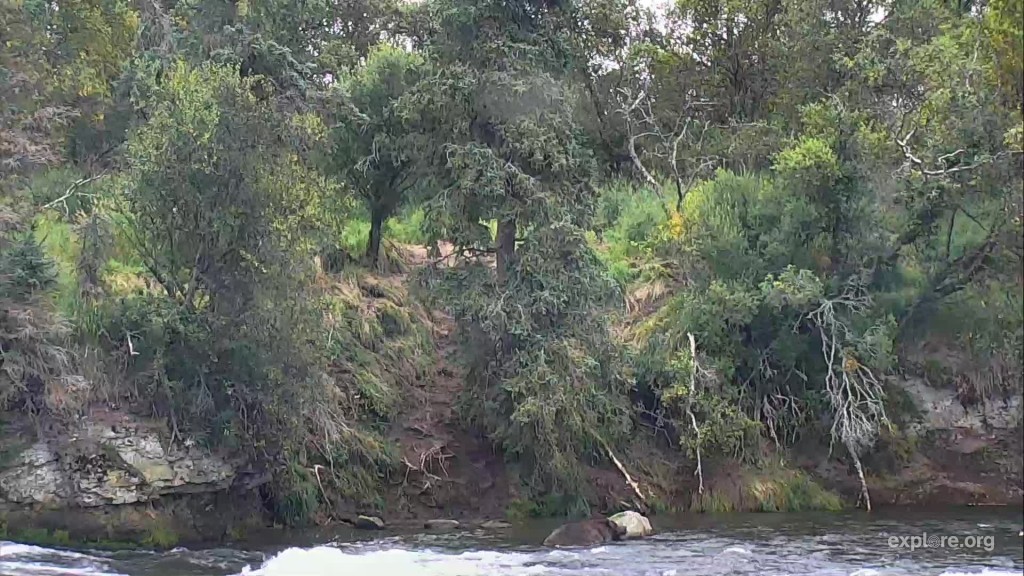 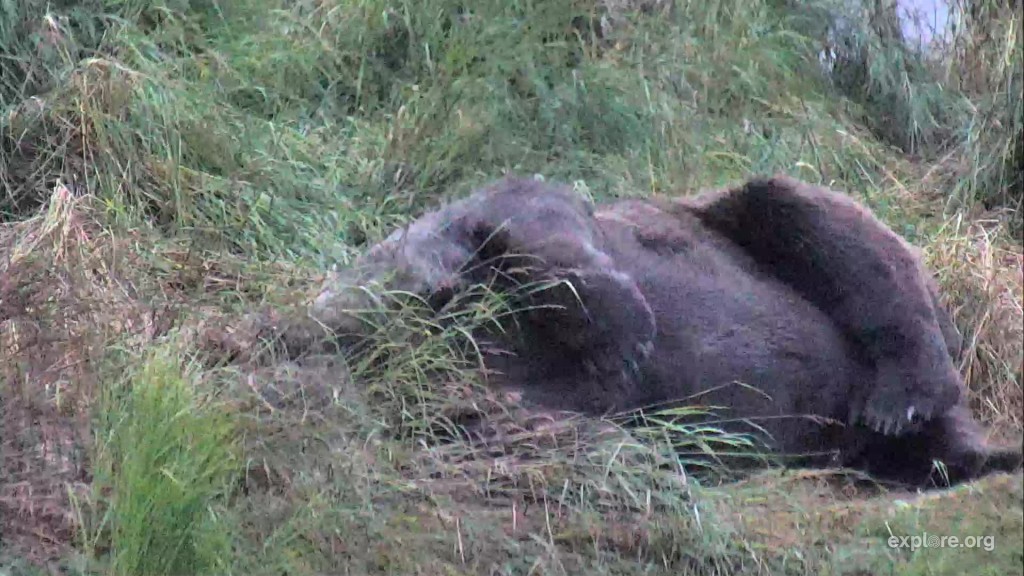 480 Otis napping on the island

708 Amelia and cubs were also seen pirating fish from subadults this week. They chased 719 three times or more, 503 once and even the lip fisher subadult. Pirating is indeed a fishing style and as seen by 708 Amelia and cubs can be quite sucessful. More about pirating can be found here. 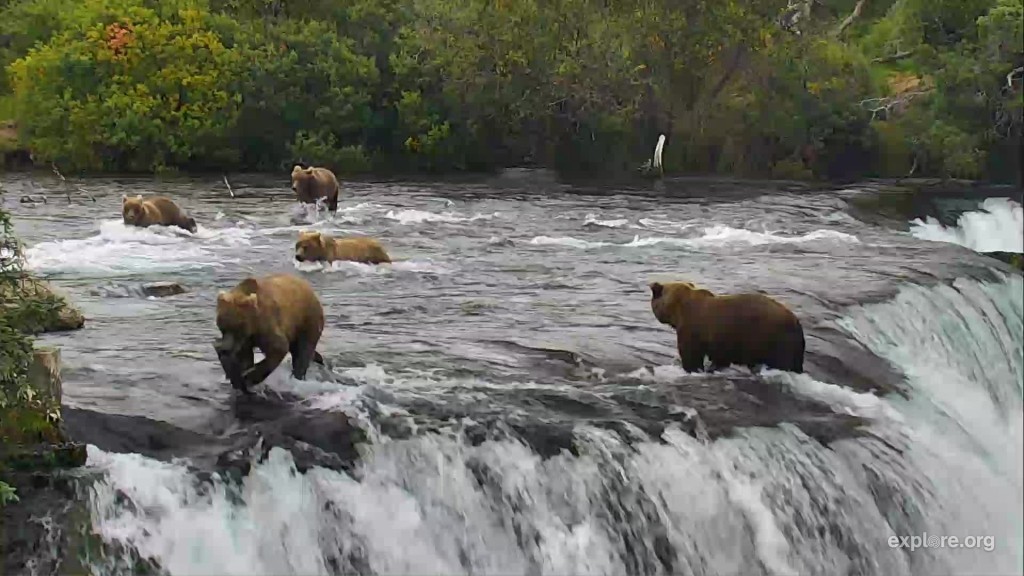 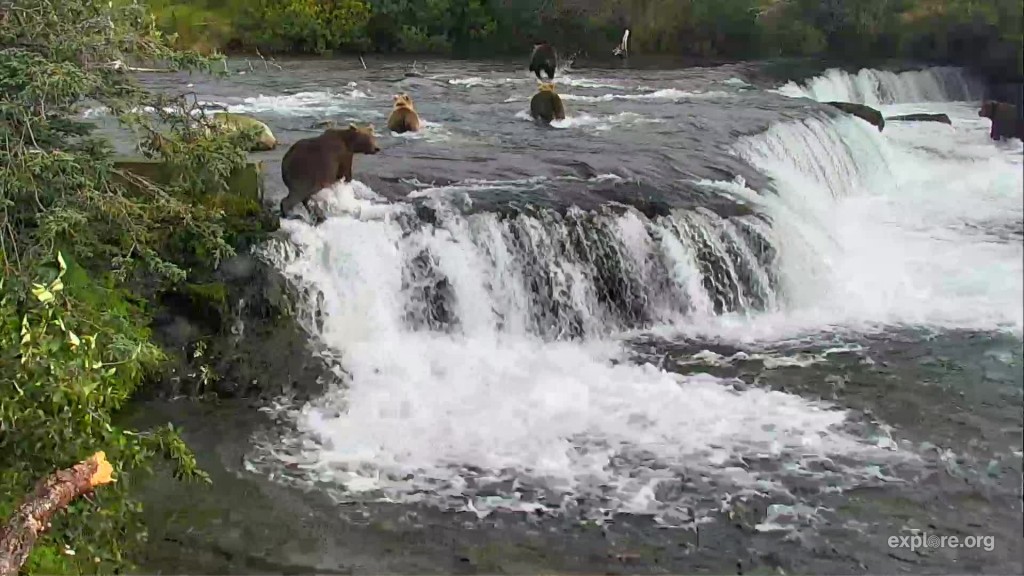 Subadults also provided us with quite a bit of entertainment and cuteness this week. First a subadult was seen napping and sitting by bridge on the lower river, giving cam viewers a great close up view. Two other subadults wrestled and played near the platforms, much to the delight of cam viewers.