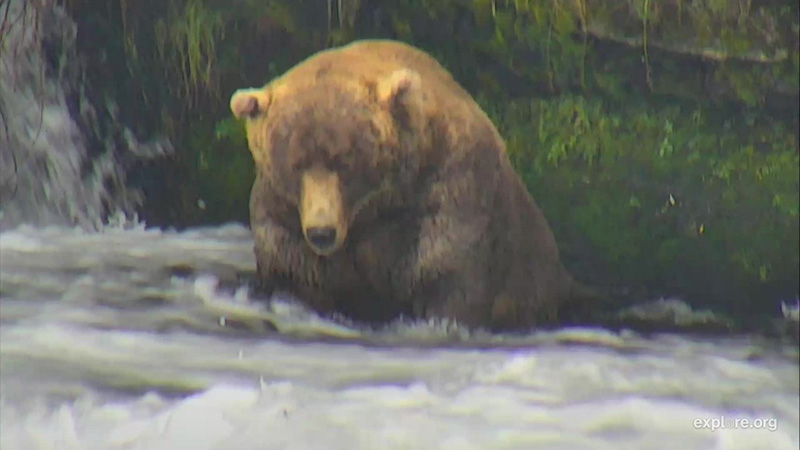 Last Saturday during a PBP, we witnessed an altercation between 32 Chunk and 474.  The two bears were fishing at the falls in close proximity to each other near the far pool area between the log and the rock.  474 made a dive and came up with a fish.  He appeared to try to walk past 32 with the fish.  Maybe 32 found this an invasion of his space and made a move toward 474, or maybe he thought to steal the fish, but either way, 474 seemed to take it as an aggressive move and reacted by lunging for 32.  Both bears stood and swatted and bit at each other before 474 got the upper paw and got 32 down on all four paws.  474 then came up over 32’s back and grabbed him behind the neck and shook hard!  480 Otis, 68, and 503 Cubadult  moved to circle around the fighting bears.  The Rangers have offered some thoughts about why they may have done this. Ranger Dave was asked why he thought 480 Otis appeared to break up the fight. His reply:

“He likely felt that the fight was disturbing his fishing. From what we know about brown bears, it’s not likely that he was sticking up for 32.”

Mike Fitz was also asked his thoughts as to why 480 Otis seemed to approach the fighting bears. His reply:

“I really don’t know why Otis approached the fight. It’s important to note that he wasn’t the only bear to approach the fight. 68 and 503 also approached. I sometimes saw 856 approach fights among subordinate bears, probably to reassert his dominance over the others, but the approach by three bears who all rank at different levels in the hierarchy is something I don’t understand.”

The fighting didn’t last long.  32 moved away afterwards and eventually walked downriver seeming no worse for the battle.  It’s been reported that he may have suffered some minor wounds to his chest area.  474 also appears to have some chest wounds.  Neither 32 or 474 seems to have altered their behavior at the falls since this encounter.  Both are still a little uneasy around each other, but both will fish the falls at the same time. Video of the fight can be seen here. 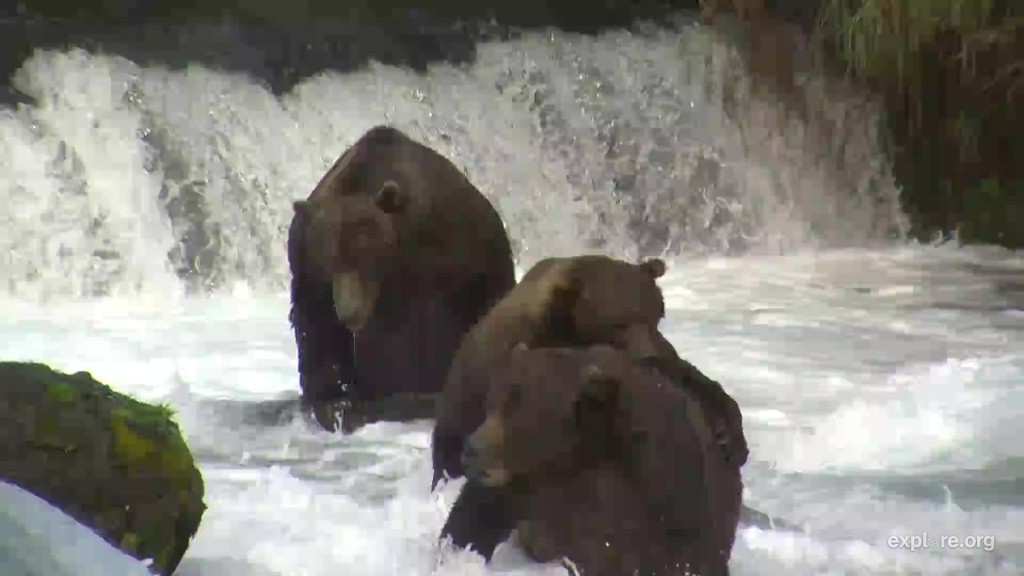 474 seems to spark aggressive/dominant behavior in both 32 and 747.  Both have had a few run ins with 474 and have attempted to move him away by chasing or staring and then have further asserted dominance by cowboy walking, tree rubbing or scent marking.  474 never goes very far.  He waits a little bit and then returns to occupy his favored spot in the far pool by the rock.

This week saw the return of a few of our bears most notably 856. Last we saw him he was, as one of Brooks camps Ranger said “a shell of his former self”. 480 Otis, 32 Chunk and 151 Walker were in the far pool when 151 and 32 seemed to go on alert, 151 Walker left the far pool first and 32 Chunk sniffed the air and he too left the far pool. 856 then came walking in and backed 480 Otis out of the office and walked around table rock and took up his spot at the fallen log. He looked and acted like his old self, video of 856 displacing 480 Otis can be seen here. The bear cam chatters not so patiently awaited for the meet and greet between 747 and 856, who would be top bear? The next day it happened in the morning 747 was at the fallen log and we then see 856 strolling across the falls, 747 yields his spot to 856 by moving further down at the fallen log. 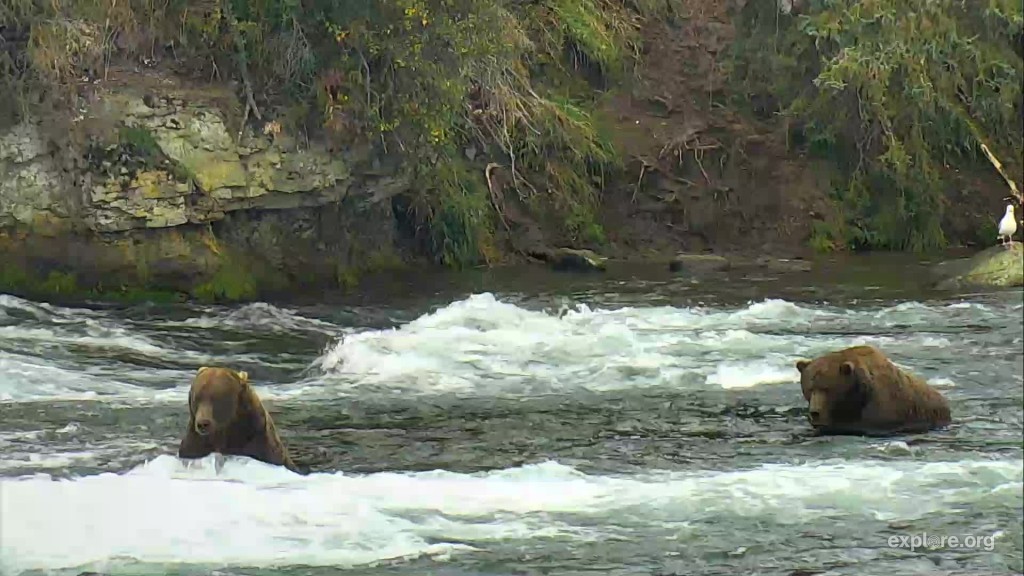 747 then left and went to the Jacuzzi and they seemed to ignore each other the rest of the time they shared the falls. Later that evening 856 was in the Jacuzzi where he had been most of the day when 747 came down the far path and sat with 480 Otis at Alice’s, 480 Otis complaining the whole time. 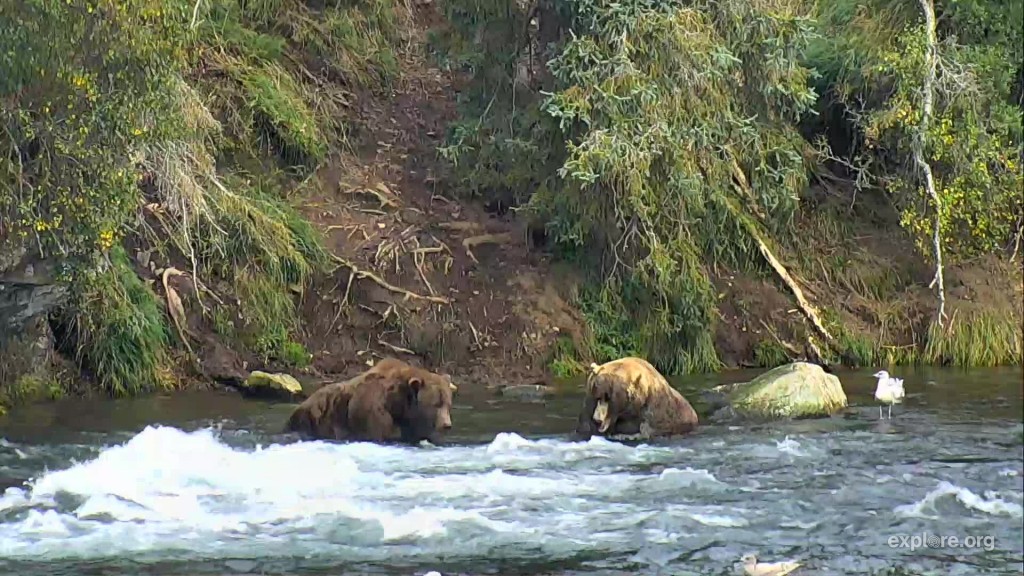 747 then crossed the falls and sat outside the Jacuzzi just watching 856. He again seemed to yield to 856. 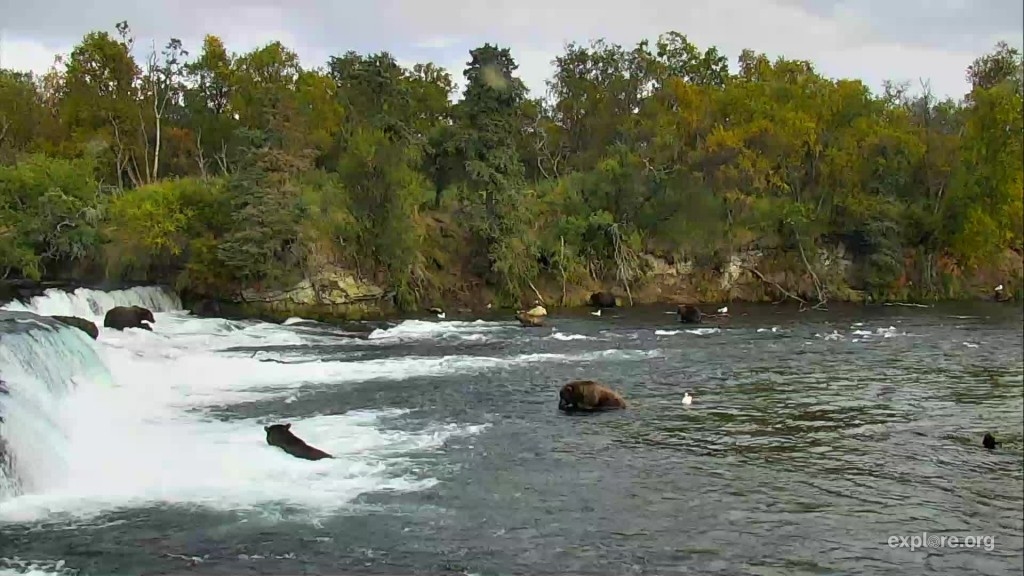 747 sitting outside the Jacuzzi watching 856

856 then caught a salmon and took it out of the Jacuzzi to eat. 747 sat by the Jacuzzi for a little while before entering and starting to fish. 856 came back but instead of approaching the Jacuzzi he sat outside of it and watched 747 fish. 856 sat there for a while before leaving and heading down river. 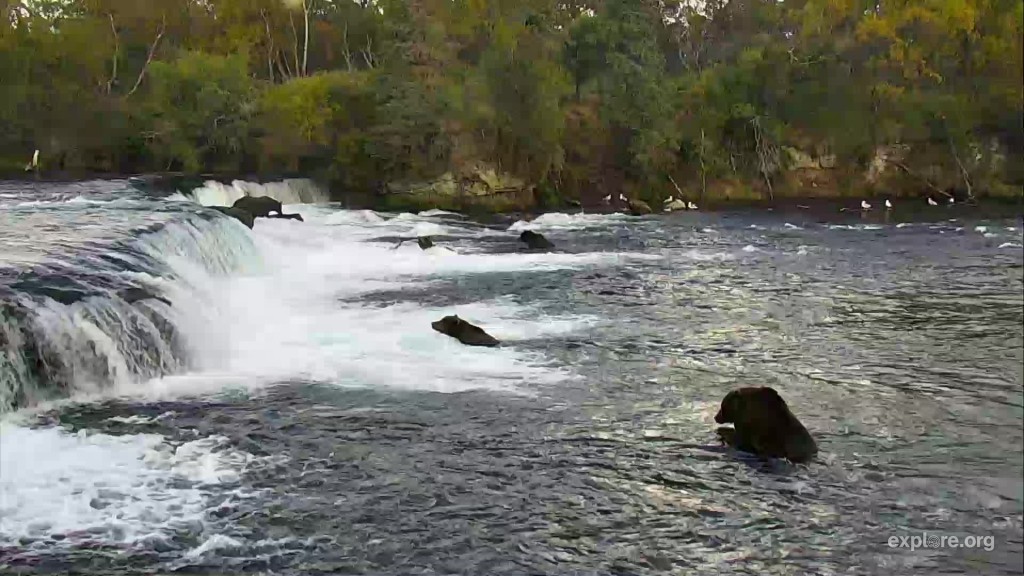 856 sitting outside the Jacuzzi watching 747

So who is top bear? As we write this blog I don’t think there is a firm answer, 747 has yielded to 856 but 856 has also yielded to 747. We will have to watch the cams to see the what happens. I asked Mike Fitz what he thought about 474 a fall bear being so high up on the hierarchy? His reply:

“Often the hierarchy is settled in the fall because most of the bears at the river have encountered each other repeatedly by now. This year is a little different since several of the big adult males were not at the falls in July. With that being said, it is not surprising to find a bear like 474, who may only use the river in the fall, act as dominant as he is since establishing one’s place in the hierarchy is not dependent on time of year.”

Note this was before the return of 856 but does show that the hierarchy can still shift this late in the season. Who is the bear at the top of the hierarchy? As we write this there is no solid answer,  we will have to continue to watch the cams to see what happens.

On Monday, 634 Popeye returned to the falls after a long absence.  When we last saw him he had suffered some sort of wound and seemed almost unable to put weight on a back leg.  When he strolled in on Monday, he was walking well and was nice and fat!  🙂  A very good thing for a brown bear in the fall!  He was observed moving aggressively toward another bear and we also saw him going up the far path to leave the falls.  All done without a noticeable limp.  We’ve seen him return to fish at the falls a few times since then. 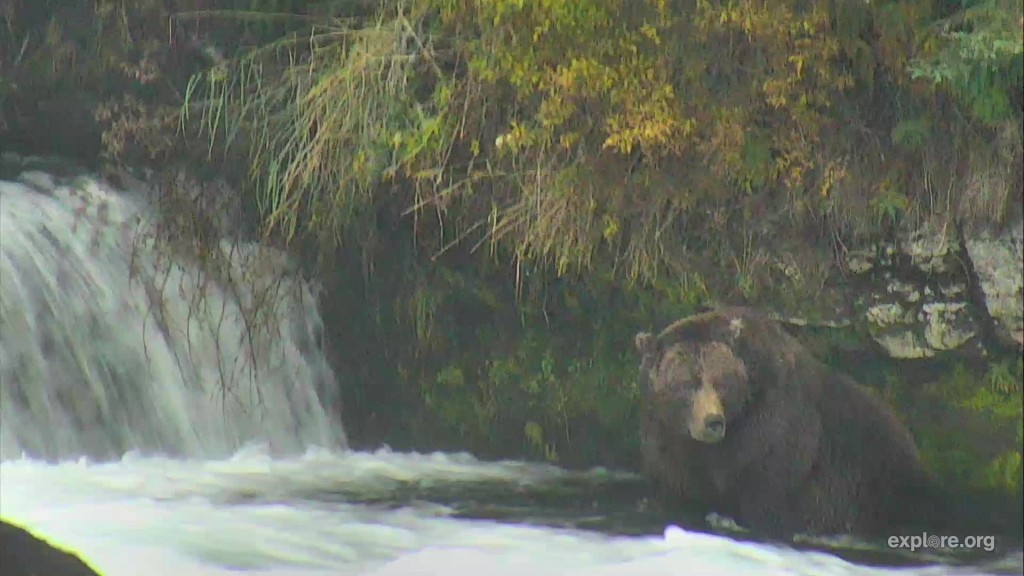 634 Popeye in the office 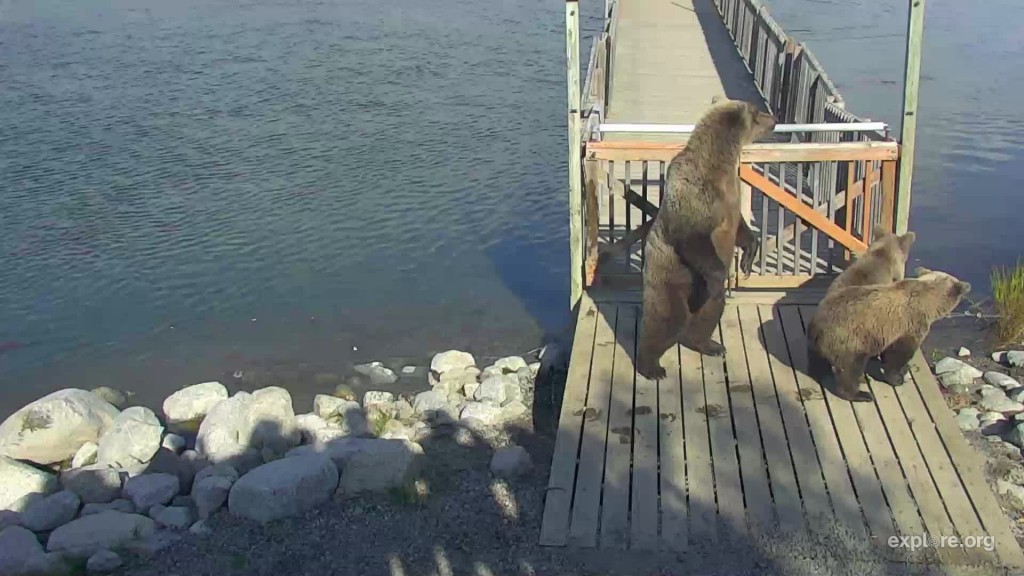 171 and her cubs near the bridge

151 Walker and 503 Cubadult have continued to entertain viewers with their frequent bouts of play-fighting. Almost everyday this past week found them play-fighting 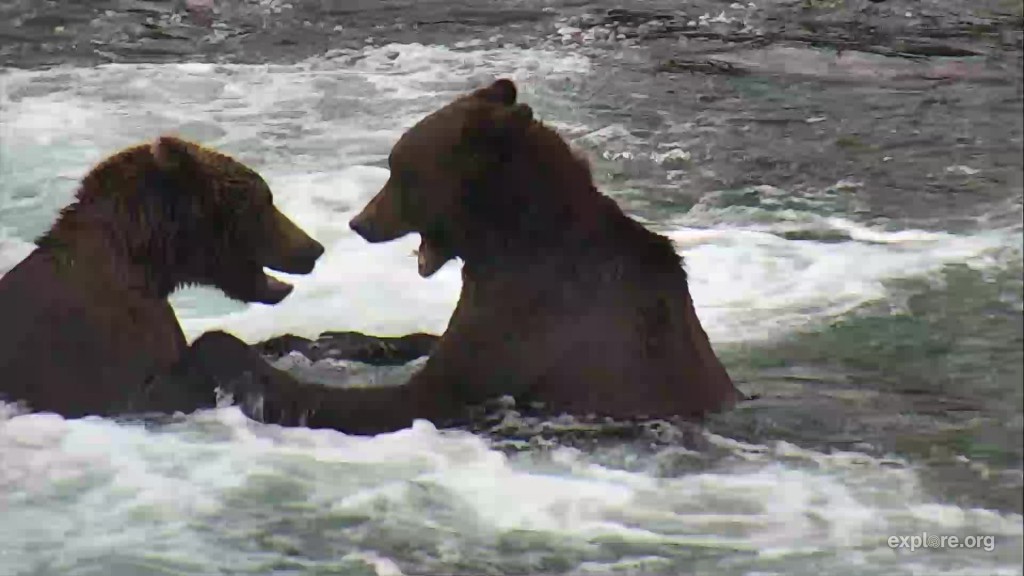 151 Walker and 503 Cubadult play-fighting in the Jacuzzi

They also get our attention individually.  503 amazes us with his continued appearance right in there with big, dominant males at the falls despite often being charged by the more dominant bears – 747, 480, and 32. He looks like he’s going to be a bear to be reckoned with as he reaches maturity in the coming years. 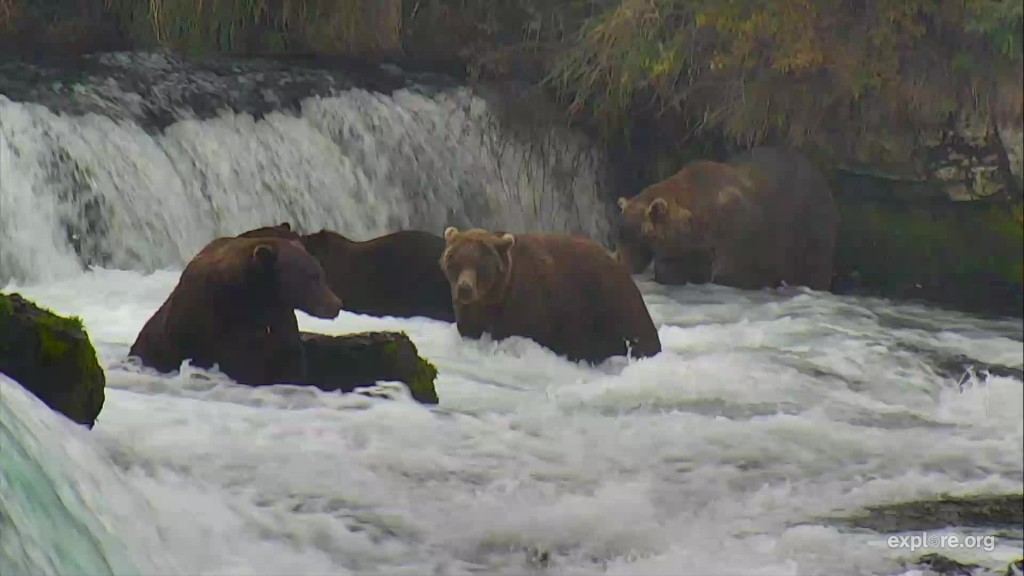 151 got our attention in a much less dignified way.  During an attempt to fish on the lip of the falls, he overbalanced and slid right down the front of the falls.  32 Chunk was sitting in the Jacuzzi right below at the time.  He watched with interest as 151 sank completely out of sight, and then reacted with surprise when 151 bobbed to the surface in front of him.  He got aggressive about this invasion of his space and moved 151 out of the Jacuzzi area quickly. Video of 151 Walker’s slip off the lip can be seen here. 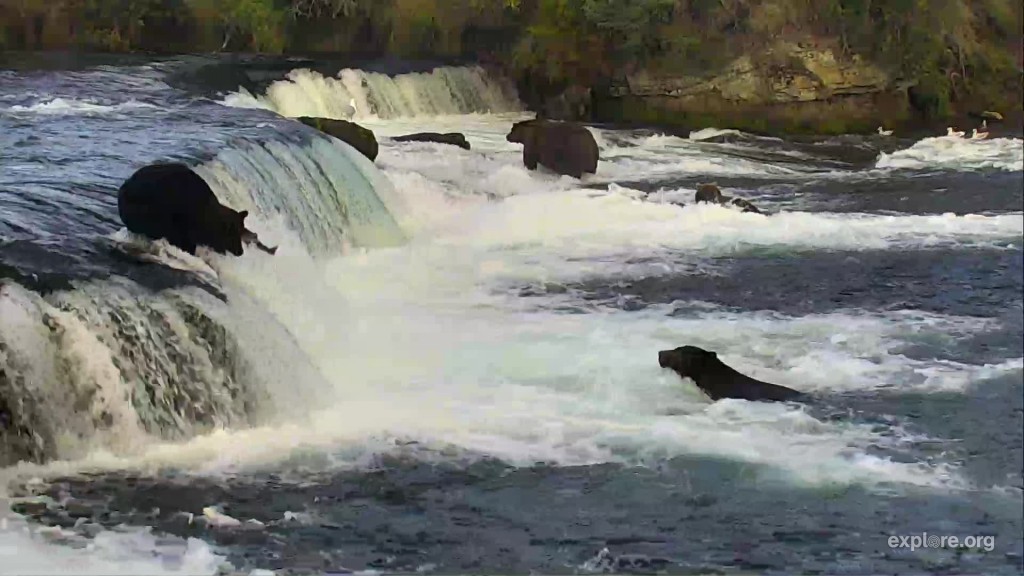 151 Walker just before he slipped off the lip

410 Four Ton the queen of Katmai was back to her marathon napping sessions on the spit. If you are new to the bear cams you may worry upon seeing a large dark bear shaped blob out on the spit that doesn’t seem to be moving. Never fear this is usually 410 taking a break from snorkeling for salmon. She has been known to sleep for hours, occasionally raising her paw or head to let us know all is well. 94 has also been seen a couple times this week napping on the spit and chatters had to wait to see the bear lift their head in order to see if it was 410 or 94.

410 will walk up on the spit and start digging a rather large belly hole. 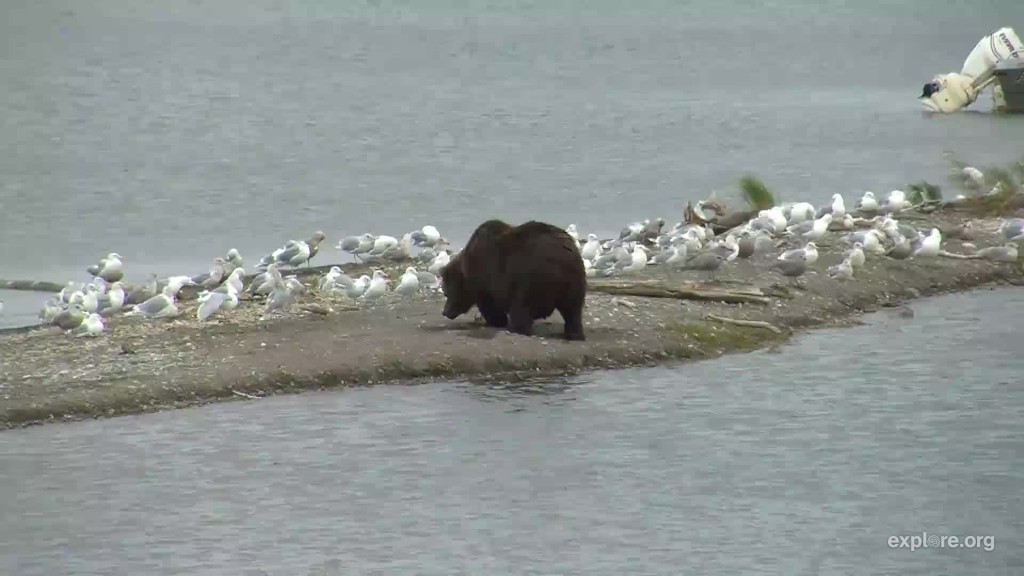 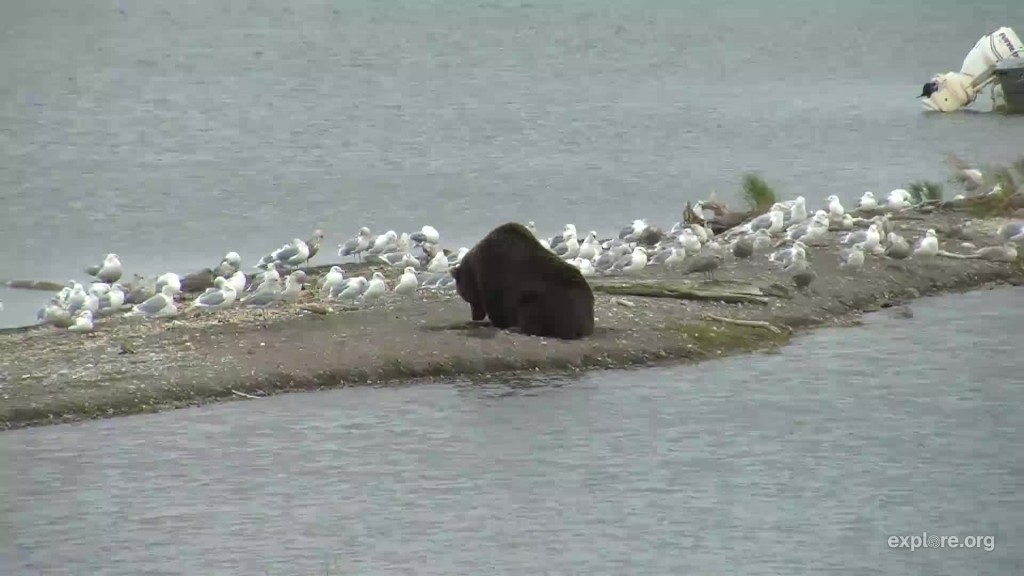 410 preparing to lay down 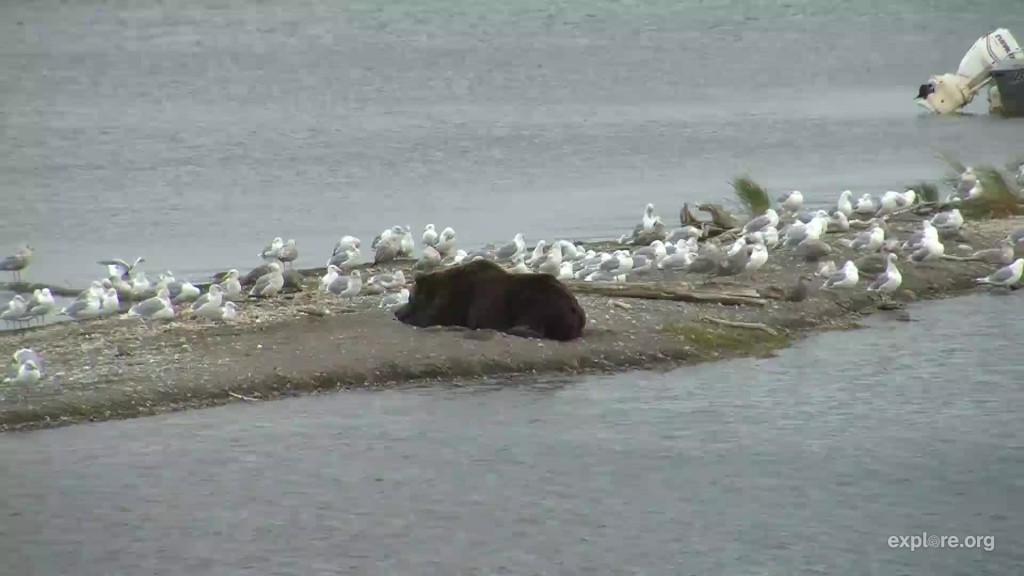 410 had some pint sized visitors on the spit with her Thursday, 435 Holly and her cubs. 435 parked her cubs on the spit while 410 napped and would come back every so often to check on them. One time they walked right by 410 and disturbed her sleep. 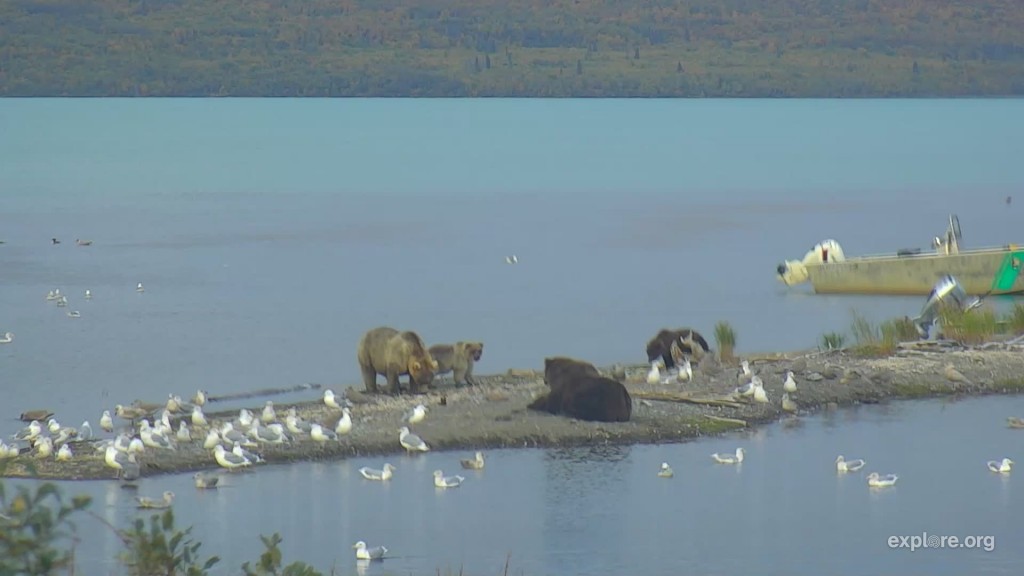 480 Otis continues to appear daily at the falls.  He often has the shortest commute to his daily fishing routine since he has been seen sleeping on the island several nights.  480 also is showing us that while we may think him old and slow moving, he is still capable of asserting some dominance over some bears.  He was seen mooooving 879 from the office area with a combination of grumbling/growling and backing into his desired spot leaving 879 without much choice but to move.  480 will also challenge and back off 474. 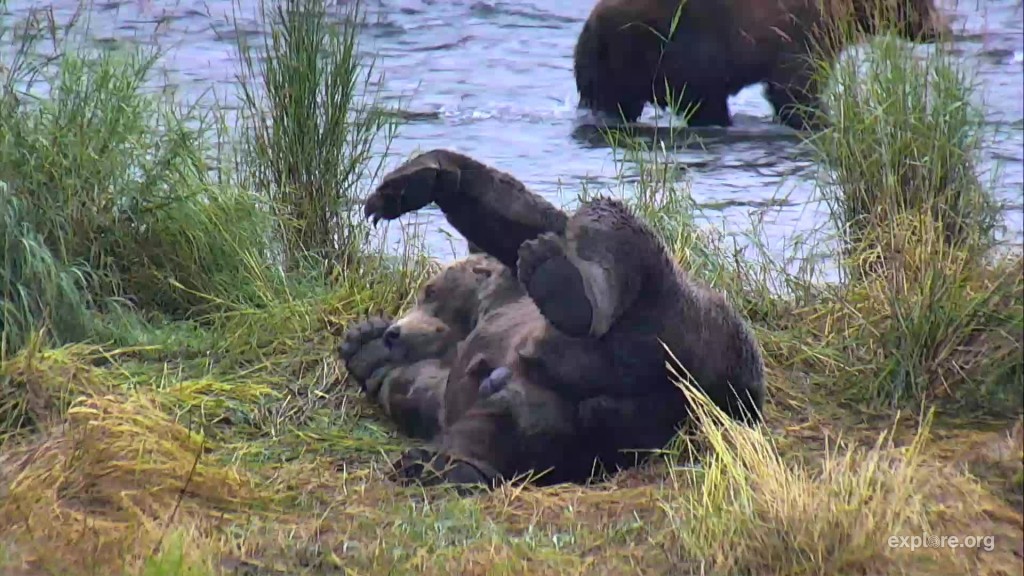 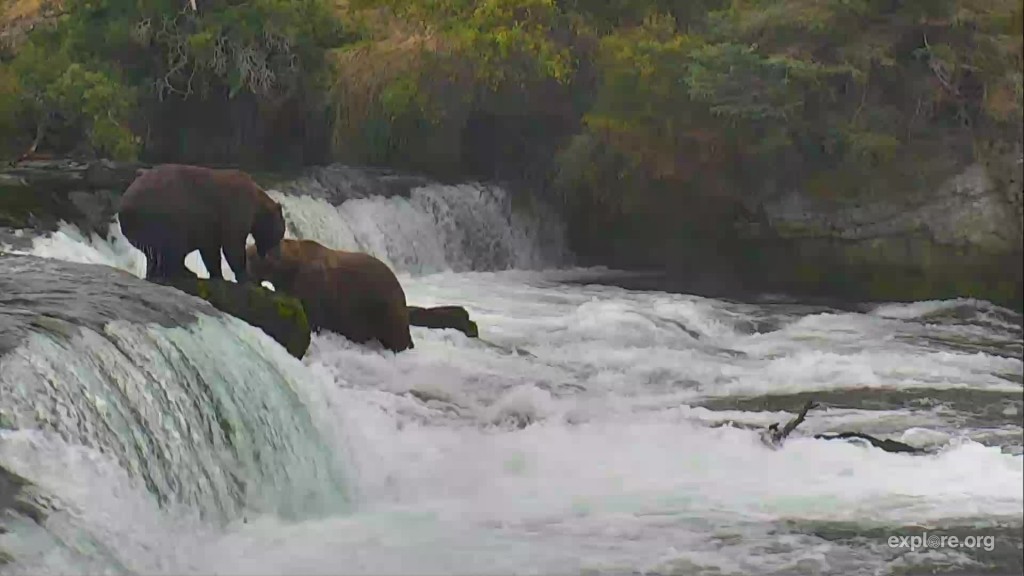 We observed one of 409 Beanose’s cubs displaying a common problem many bears develop from eating so much raw salmon….  A tapeworm being expelled.  While viewing this long, white, dragger might seem gross….well, okay… it is gross….it’s a part of their lives as discussed here. 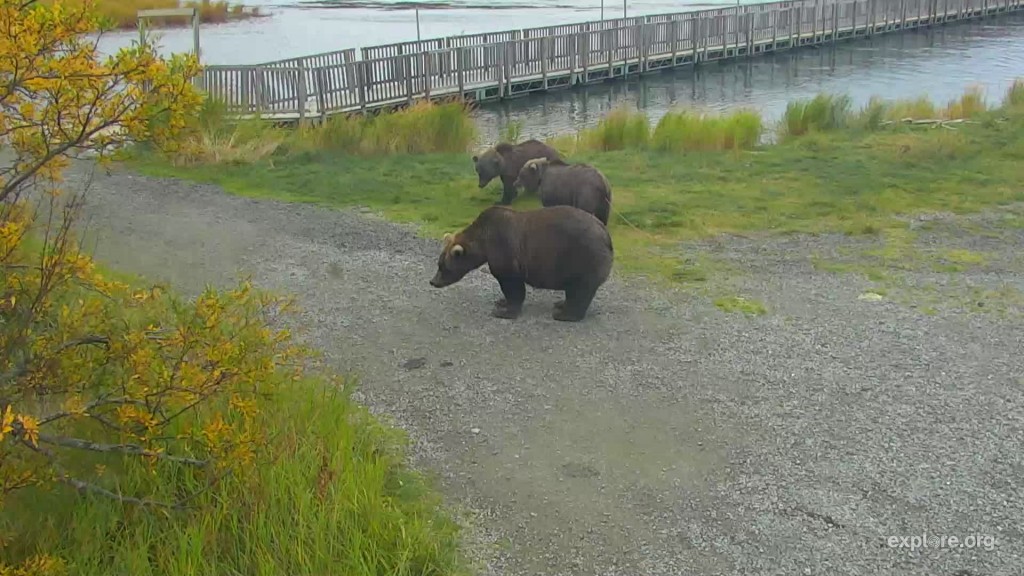 409 Beadnose and cubs, one cub has a tapeworm seen dragging behind her

We also had a plethora of PBP’s and Ranger chats this week:

September 8 PBP can be viewed here.

September 10 PBP can be viewed here.

September 12 PBP can be viewed here.

September 12 Ask a Ranger can be viewed here.