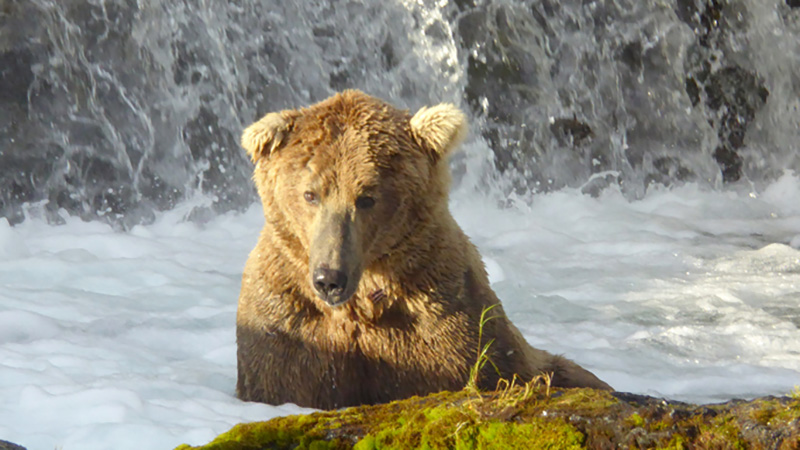 Is it wrong to connect with individual wild animals like 480 Otis? NPS/M. Fitz.

Individual animals are undoubtedly important to the public (just read about Cecil the Lion) and their stories can be a catalyst for change, but a recent Yellowstone Science article, I Am Not a Scientist, calls this a “myopia.” It describes how a focus on individual animals limits our ability to preserve wildlife populations. I wholeheartedly disagree. In contrast, I argue it is more difficult to know, understand, and appreciate wildlife populations without connecting to individual animals. Naming an animal, referring to its individuality, or connecting with it isn’t a weakness of the human condition or near-sighted. We must recognize the role of the individual in wildlife management, conservation, and especially in public appreciation.

I’ll admit my bias: I love to identify individual bears at Brooks River. Bears are smart, long-lived, and habitual. Even casual observers can distinguish individual bears through physical and behavioral characteristics. Through my work as an interpretive ranger at Brooks Camp at Katmai, I’ve used information from bear monitoring research and personal observations to understand and learn about bears. (I even wrote a book about it, Bears of Brooks River.) As a result, when I talk to the public about bears, I use my knowledge of individual bears to relate ideas about bear biology, ecology, and population dynamics. The toughness and resiliency of bears may seem detached, abstract, and distant without anecdotes about how a bear survived despite a broken jaw. Without the stories about and life histories of individual bears at Brooks River (some of which we see every year for their entire lives), then much of the information I interpret is less likely to resonate with the public. It is less likely to provide people with opportunities to make meaningful connections with wildlife and become advocates for wildlife populations.

If you have to refer to animal by name or number then so be it. Naming an animal is not myopic and it does not anthropomorphize it. Only the meanings and interpretations of the animal do that. (This is a topic I explored in a previous post, To Name Or Not To Name?) Individual stories and even names provide context and a chance for people to move from specific to broad concepts.

In late October 2015, a nine-month-old cub stumbled and collapsed in view of the webcams on Brooks River. For at least two days, it lay there, dying slowly (necropsy results determined it likely died from infectious canine hepatitis). People were understandably concerned for its welfare. The bearcam chat onexplore.org was filled with comments about the cub and its fate. The park received many questions asking how we would help it. Some people demanded we intervene (at one point I was called a “mouse” for not acting). Most, however, watched and conversed with us and other bearcam viewers. Through a variety of platforms, and especially by chatting in real time with webcam viewers on explore.org, we were largely successful in interpreting the situation and providing viewers with the information necessary to at least understand national park policy and why park staff chose not to interfere.

An ill cub lies on the ground while its mother and sibling sit nearby. People all over the world watched the cub with rapt attention.

This situation allowed us to use the cub’s plight and the mother’s vigilance to interpret important aspects ofbear biology and behavior, whether or not bears experience emotions, and NPS policy. We had to focus on the cub’s story. To simply explain that Katmai’s bear population is large and healthy and the death of this cub doesn’t matter to the population would be insensitive and ignore the needs of webcam viewers.

In I Am Not A Scientist, Charissa Reid postulates that thinking of wild animals as individuals causes us to narrow our focus about what national parks are here to protect. In the same paragraph, P.J. White, a biologist at Yellowstone, suggests that visitors can give celebrity status to wild animals. White continues, “Though some argue this helps connect people with nature, it also creates unrealistic expectations and issues for managers tasked with sustaining viable populations of wildlife rather than a zoo-like atmosphere where beloved animals are guaranteed protection.” This doesn’t have to be the case. A “zoo-like atmosphere” is much more likely to manifest when wildlife managers, biologists, and interpreters neglect to engage the public in conversations about how individual animals provide context for the larger population.

I am not a scientist. I envy those in science and admire their attention to detail, creativity, and skills. My opinions, in no way, should be misconstrued for a lack of respect for scientists and science. However, do wildlife biologists and park managers not make meaningful connections with the wild animal they’ve studied? They’ve never been surprised or stunned by an animal’s skill or intelligence? They’ve never gleaned insight about a species’ survival instincts by observing an individual animal? They’ve never felt empathy for a suffering animal? Many, if not all, biologists and wildlife managers at national parks make connections with individual animals and that helps them better understand and appreciate wildlife. Why should the public be denied the same opportunities?

Failing to recognize the importance of individual animals in the public mind ignores the reality of human nature—we are more likely to connect to individuals than populations. Naming animals or referring to them individually is not myopic. Using an animal’s life history, characteristics, and behavior to relate information about populations and ecosystems is not wrong either. It is necessary.