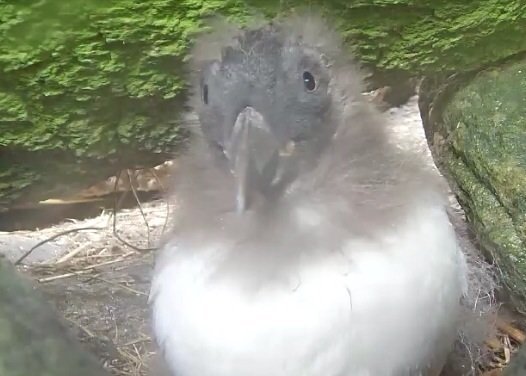 This Just In: Puffling Pal Parades Off

Update from Seal Island: Our Puffling Pal from the Puffin Burrow Live Cam has successfully fledged! Read the update from our partners at Audubon:

The Seal Island Puffin Burrow puffling affectionately known as Pal has successfully fledged! On August 8th 2014, after six weeks of TLC from puffin parents Phoebe and Finn, Pal left the burrow for possibly the first and last time. In typical puffin fashion, he set out in the middle of the night when the risk of predation is lower.  Newly independent, he will spend the next 2-3 years at sea flying, fishing, sleeping and swimming out on the open North Atlantic before returning to land, perhaps with a mate of his own.

Fortunately, his banding will aid in identifying him upon future sightings.

Though it won’t be quite the same without Pal, you can continue to check in on

the burrow as empty-nesters Phoebe and Finn stay behind a while to guard their home from intruders.
Thank you for watching, interacting, and sharing throughout this puffin season.

While the burrow is no longer in use this season, head over to the Boulder Berm and Loafing Ledge Live Cam for more Puffin action.
(Thanks to noahsark for the snapshot!)
audubon
baby puffin
bird cam
bird watching
birds
explore.org
national audubon society
1,031 August 18, 2014