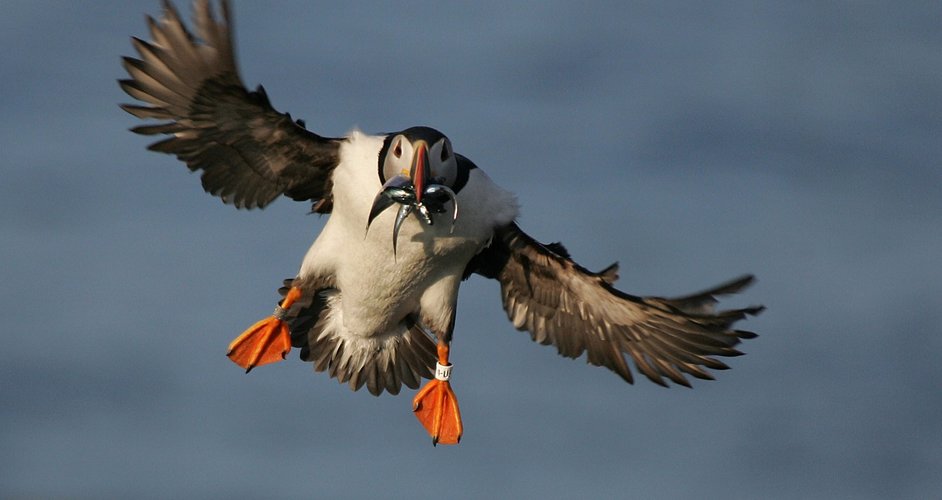 The Evolution and Adaptation on Seal Island

Mother Jones and Upworthy shared a story about the Puffin Project and specifically about the unfortunate fate of a Puffling in 2012. This sad story has a silver lining, helping the Audubon, bird and climate experts understand the adaptations of Puffins, Razorbills and other birds on Seal Island.

The warming waters off Maine’s coast from climate change are changing the species of fish available. Some aren’t easy for Pufflings to swallow, which could mean life or death. At the same time, there is now an increase in new fish that are appropriate for Puffins and their chicks, and these are becoming more available thanks to fishery laws.

“In contrast to the poor nesting season at other Maine puffin colonies, this colony increased from 104 pairs in 2012 to 111 pairs in 2013 and most pairs fledged chicks… Maintaining multiple nesting islands is an important strategy for conserving colonial birds such as puffins.

Recovering fisheries may help puffins adapt to changing climate. The pressing question is: Was 2012-2013 an anomaly or the new normal? Ongoing observation at puffin nesting islands will help to answer this question. It’s also clear that protecting fish resources from over fishing is becoming increasingly important, giving seabirds a chance to adapt to changing conditions.”

Click here to see an update from Audubon Society’s Conservation News, and visit the Puffin family’s growing colony at explore.org on the Live Cam here!

← The Contest Is On — Caption This!
Amazing Wildlife Photography from Our Fans! →