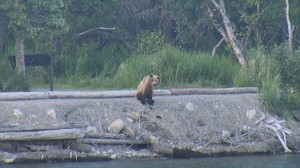 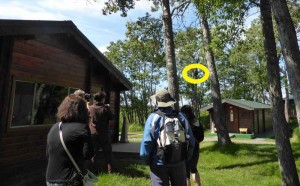 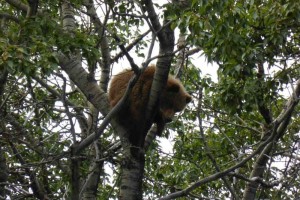 The Challenges of Managing Bears and People at Brooks Camp

July 1, 2014 was a stressful day for rangers and one yearling cub at Brooks Camp. Around 10 AM bear #402 became separated from her cub near the mouth of the Brooks River. The yearling walked and ran to Brooks Lodge and climbed a tree just outside of the lodge. The cub was not reunited with its mother until 8:15 PM.

Several rangers and I had the fortune (or misfortune after several hours) of watching the cub in the tree. The cub was so close to the buildings at Brooks Lodge that people could not use the lodge bathhouse or access several cabins. The cub was less than 50 yards from the back door of the lodge kitchen and dining hall.

What happened? Where was the cub’s mother? Bear 402 and her yearling cub were at the mouth of the Brooks River fishing around 10 AM. The yearling cub swam across the river as 402 fished downstream. 402 lost track of the cub and did not know where it was. The cub didn’t seem to know where its mother was either. 402 began searching for the cub on the opposite side of the river. Shortly after the family was separated, 402 disappeared into the forest at the mouth of the Brooks River. By this time, the yearling cub had wandering to Brooks Lodge and climbed a tree. With 402 nowhere in sight and her cub treed in camp, rangers were in a bit of jam.

Contrary to popular belief brown bears can climb trees. I have seen cubs and adult bears do it. Brown bears are not likely to climb trees when threatened, but they can and sometimes do. When a bear climbs a tree, it won’t climb down until it no longer feels threatened. With a few hundred people moving by Brooks Lodge, the cub was likely not coming down anytime soon.

Bears have climbed trees at Brooks Lodge before, but those situations are usually short in duration. Typically, rangers have to keep people away from the bear and it will climb down and depart in short order. Having a lone cub treed in camp with no mother to be found was unprecedented. Our initial hope was that 402 would catch the cub’s scent and track it into camp. Mother bears will call their cubs down out of trees with a huff. This time, 402 was missing in action.

As you can see in the photos, the cub was very high in the tree. We knew it was stressed. There is no way to get it out of the tree. It had to come down on its own. However, people still want to walk around the lodge and they still want to eat lunch. Brooks Lodge staff still has to meet airplanes on the beach only 100 yards (91 m) away and move luggage to the lodge with a vehicle less than 50 yards (46 m) from the treed cub. Unfortunately, it was not feasible to shut the camp down for the cub. All the noise and people likely kept the cub in the tree—for hours.

Around 5:30 PM, the cub decided to climb down the tree. Rangers instructed people to enter buildings, stay out of the cub’s line of sight, and give it space to go on it’s way. Any noise could startle the cub and cause it climb to the tree again. Spreading that message is hard though. As the cub got to the base of the tree, a plane started its engine and spooked the cub. It climbed back up the tree and stayed there. Remember, the cub climbed the tree around 10 AM.

Around 6 PM, the cub climbed down the tree again. This time it was not startled by people or engines and left the lodge area on it’s own. Its mother was still nowhere to be found. The cub walked along the beach away from the lodge and toward the campground. Perhaps uncomfortable without its mother, it soon returned to the lodge and climbed a tree.

I felt sympathy for the cub, but I was frustrated by the situation.There was essentially nothing we could do to coax the cub down and away from the buildings. This was clearly a place where it felt some comfort and safety. Otherwise it would not have returned. We couldn’t do anything more than watch and wait.

Finally around 8 PM, the cub came out of the tree. 402 whereabouts were still unknown. Several rangers worked hard to keep people inside of buildings. No planes were on the beach and the cub had free reign. Still, it was alone. It wanted its mother. It tried to return to the lodge, but eventually left that area and walked back to the river.

Shortly after it reached the river it began to bawl. Cubs bawl when they are hungry or otherwise trying to get mother’s attention. This was something it rarely did in the tree. The bawling clearly got the attention of one bear that swam across the river towards it. When I heard that another bear was approaching the cub, I wasn’t sure what to expect. The other bear could ignore it, kill it, or scare it back to the lodge.

To my amazement, the bear that was approaching the cub was 402, its mother. She must have been near the mouth of the river and heard the cub’s bawling. After 10 hours of separation, they were finally back together. The family was last seen moving upriver into the forest.

This was a happy ending for the family, but it highlights the challenges of managing people and bears at Brooks Camp. The facilities at Brooks Camp—lodge, employee housing, and visitor center—are located in perfect bear habitat. It is difficult to reconcile the different needs of people and bears. The situation may have resolved itself sooner if we were not around. At minimum, the bear would have been able to move freely without our interference.

But, Brooks Camp is a place for people too. A cub in a tree near the lodge is not a simple matter to deal with and the camp can’t shut down for the sake of the cub. When you watch the cams, think about our relationship with the animals as well as how a park should be used and managed. Parks are for people and well as wildlife and ecosystems. For generations, people have been debating how to balance the needs of people and animals. In a place like Brooks Camp, the needs of people and wildlife are bared for all to see.

I won’t have time to respond to comments to this post now, but I am curious to know what everyone thinks about our relationship with wildlife like bears. How do you provide for the needs of people at a place like Brooks Camp and give bears the space they need to survive?

(Watch the video highlight of 402 being reunited with her cub here.)

← Live Chat About Penguins! (Does it get any better than that?)
Puffin Hatching Highlights! →