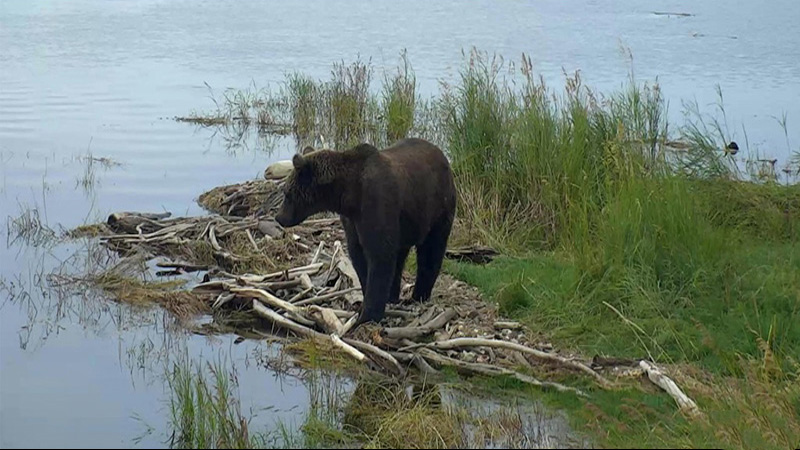 Testing the Water by Mike Fitz

At Brooks Falls, most bears tend to focus their efforts at one or two fishing spots. More rarely, a bear will learn to fish successfully almost anywhere at the falls. 503 has used several different fishing spots at Brooks Falls this year—the far pool, near the downed log, the jacuzzi, and the lip. Is he learning to become a generalist angler or will he eventually specialize in a particular spot? Bears from Brooks River’s past and present can offer us some insights into 503’s potential future. 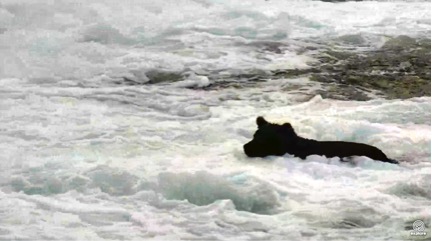 503 searches for his breakfast in the Brooks Falls jacuzzi on September 30.

As a subadult and young adult bear, 218 Ugly learned to fish nearly everywhere. Like 503, we’d see him standing near the far pool, on the lip, or sitting in the jacuzzi. He’d go where there was a vacancy. 218 grew quite large in his early teens, fishing in the far pool and lip occasionally, but usually in the jacuzzi or near there instead. Even in 2013, the last year he was seen at Brooks River, 218 was still fishing multiple locations at the falls. 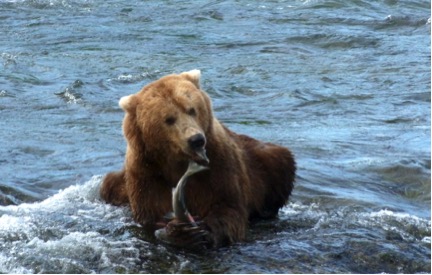 747 fished the jacuzzi and the far pool as a younger bear when he was not nearly as large or dominant as he is now. After growing to become, in my opinion, the biggest bear on Brooks River this year, he’s generally kept to the same places at the falls as in his younger days.

755 Scare D Bear has become quite skilled at fishing in the far pool and near the log in the middle of the falls, but he’s never shown much tolerance toward the presence of people or other bears in contrast to 503. In July especially, the wildlife viewing platform where the falls cam is mounted is often full of people. Since the jacuzzi and lip are fairly close to that side of the river, 755’s intolerance of people may have prevented him from fully learning to exploit the jacuzzi as a productive fishing spot. 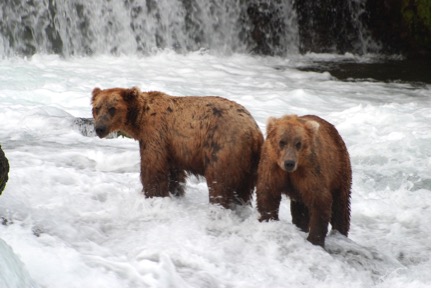 Successful fishing for bears, unlike the scavenging that takes place down river in September and October, takes practice. Even moving about the falls can be hazardous.

503 probably doesn’t vary his fishing spots because he’s purposefully practicing in each location. He’s fishing in those places because that’s where he can fit in. Even though he’s very big for a 4.5 year-old bear, he’s still much smaller than the mature adults around him. When the jacuzzi is occupied by 32 Chunk or 747, for example, 503 might go to the lip or far pool. If he can’t find space there he might remain near the log just downstream of the middle of the falls.

Not all bears his age are able or willing to fish in multiple places at Brooks Falls. 503 seems to have the disposition and size to push the boundaries around other bears. We often see him playing with other bears, and when he’s hungry he will approach a few of the much larger adult males somewhat closely in order to gain access to a suitable fishing spot. Sometimes he’s met stiff resistance, while in other instances the larger competitors have ignored him.

As male bears mature, they tend to focus more and more on the fishing spots which are most productive at the falls. The jacuzzi, in particular, is extremely productive and is the most heavily used fishing spot by adult males. If 503 grows into a large adult male, we may see him focus more and more on the jacuzzi. Then again, he might surprise us. Time will tell if 503’s experiences this year set him up for success in the future.