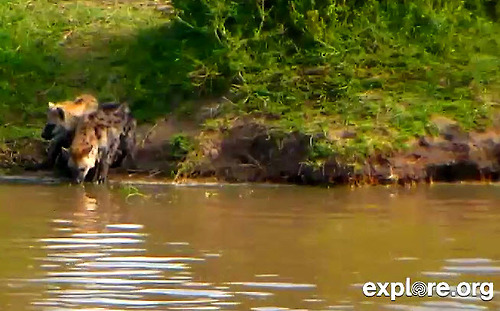 Sighted and Spotted! On the Africa Cam – Spotted Hyenas

You may remember them as the ugly, silly bad guys in the Lion King, but hyenas are formidable and stealthy hunters.

“Spotted hyenas are famed scavengers and often dine on the leftovers of other predators. But these hardy beasts are also skilled hunters that will take down wildebeest or antelope. They also kill and eat birds, lizards, snakes, and insects… Spotted hyenas are the largest of three hyena species. Brown and striped hyenas are the other two. They live throughout much of Africa and eastwards through Arabia to India. Spotted hyenas live together in large groups called clans that may include up 80 individuals and are led by females,” (NatGeo).

Fast Fact: While hyenas look a lot like dogs, they are actually more closely related to cats!