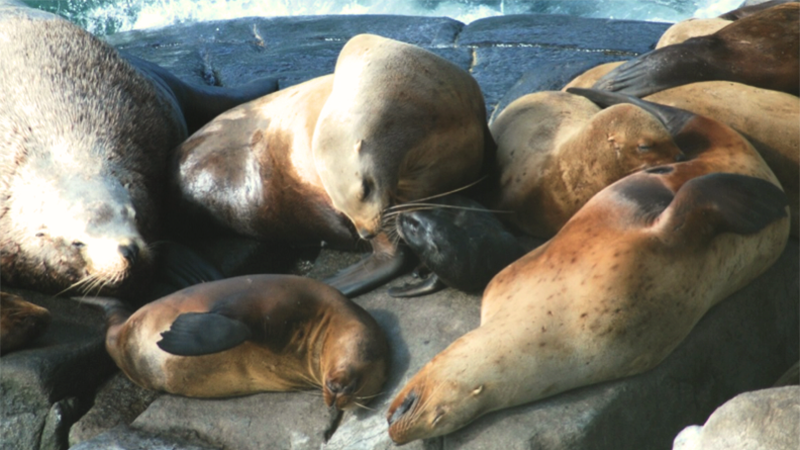 By Margaret Archibald, Alaska Department of Fish and Game

Walruses are just a part of the reason that Ryan Morrill and I are on Round Island. We’re also here because at the southeastern edge of the island, in an area we call the East Cape, there’s an important year-round haul-out for the endangered western population of Steller Sea Lions.

In early spring, herring, an important food source for Steller sea lions, spawn in nearby Togiak Bay. During this time, the East Cape shoreline becomes packed with as many as 700 noisy, playful sea lions who spend their days napping and socializing after nightly fishing trips. Round Island is considered a haul-out though, not a rookery.  A “haul out” is a place sea lions rest and hang out on land.  A “rookery” is a place where they go to have their pups and mate, chosen for its proximity to food and relative safety from predators. Starting about the middle of May, first the beach at East Cape, then the rocks around it, start to clear out as the breeding adults leave and head to rookeries where the pregnant females have their pups and the males fight for their attention.

The breeding bulls leave first, so they can get to their rookery in time to fight and establish a territory before the females arrive. The females leave a little later, generally arriving at the rookery just a few days before they give birth. So far, all the marked females that we’ve seen on Round Island were born at the Ugamak Island rookery, in the eastern Aleutians, and most return to there to have their pups. We’ve also seen a number of Ugamak males at Round Island, but surprisingly, we’ve also seen males that were born at very distant rookeries – including several from southern Southeast Alaska, and a the Commander Islands in Russia. Some non-breeding females, yearlings, juveniles and a few big males stay on Round Island through the summer. Since the exodus in May, our sea lion counts have leveled off to around 200 individuals. We both love visiting the raucous sea lions at their haul-out, watching them cavort, toss fish and interact with whales! It is hard not to admire their beautiful diving and body-surfing, or their large intelligent black eyes.

On June first, when I arrived at the western most sea lion viewpoint I heard an upsetting sound that I had not heard before, a mewling cry that immediately snared my heartstrings. I scanned the beach with the binoculars and hurried from viewpoint to viewpoint until I was able to see a tiny, furry, wet, black infant sea lion all alone on the beach, across open water and far from any of the other sea lions. When separated from their mothers, newborn baby sea lions use a distinctive call to let their mother know of their whereabouts. Each mother can recognize and identify her pup by its call, and in turn each pup can recognize its mother by her pup attraction call. I searched and searched but there was no mother sea lion nearby. Shaken, I finished my sea lion counts and hiked back to camp, leaving the pup alone on the beach with the tide rising and worry in my heart.

Back at camp, we contacted Alaska Department of Fish and Game (ADF&G) marine mammal biologist Lauri Jemison for information and advice. She told us that if the pup had been born out of sight and escaped our notice for a week and a half, the timing would be right for the mother to leave it alone for the first time. Typically, when a female sea lion has a pup, she will stay with it, nursing until it is 9-14 days old, before leaving to forage for her first meal since giving birth. Mother sea lions nurse their pups for anywhere from 10 months to several years of age and young sea lions do not start catching any of their own fish until they are 3 months old. At a normal sea lion rookery, when the moms go out fishing, pups may stay in small nursery groups while they wait for their mothers to return. Without any other pups on the island, a sea lion born here would be left completely alone. Young pups, which do not typically learn to swim until they are a month old, are especially vulnerable to getting swept off the rocks if they wander down to the intertidal zone while their mothers are out foraging. This pup crawling around alone, over the rocks and kelp below the high tide line, was not a good sign.

The next morning we packed up our cameras and binoculars and, with fingers crossed, hiked back out to East Cape, unsure of what, if anything, we would find. The suspense did not last long though, because as soon as we came over the pass and the sea lions came into view, Ryan picked out the new pup with his binoculars. It was there with its mother and nursing, hauled out in a group of sea lions a short swim across the water from where I had first heard it. What a relief! The pup’s mother must have come back from fishing that morning and helped it swim, either by taking it in her teeth or letting it ride on her back, the short distance to where the rest of the sea lions were sunning themselves on the rocks. Since June second, each time we have seen the pup it’s been with its mother, and on the same large sloping rock with a group of other females and nursing yearlings.

There is no way to know why a mother sea lion would choose to have her pup at a haul-out rather than at a rookery, but we hope that baby Iris, named after the flower that bloomed on the same day I first saw it, will survive, and even thrive, and be the first 100% local-born sea lion on Round Island.