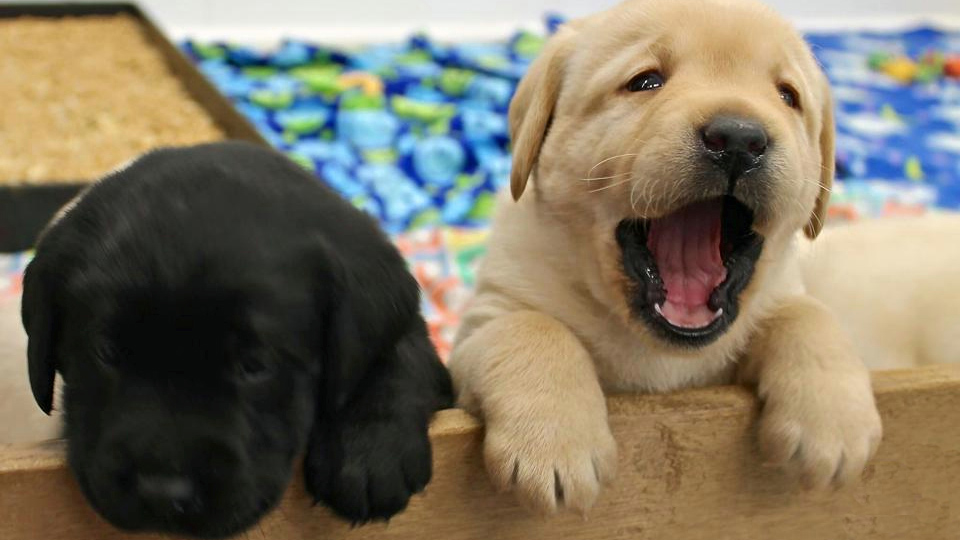 New names for the pups of the WCC Gratitude Litter!

The puppies of the Warrior Canine Connection Gratitude Litter are growing up and beginning their training to assist disabled veterans as service dogs. Now they all have new names! To honor the sacrifices of US soldiers, the puppies of WCC are traditionally named after those who served. Let’s have roll call!

Named for: 1st Lieutenant Ashley Laine Henderson Huff. Huff was assigned to the 549th Military Police Company in Mosul, training the fledgling Iraqi police. Her duties required her to accompany the police, who are often targeted by insurgents, on their patrols. On September 19, 2006 Huff was on patrol with an Iraqi police unit when a suicide car bomber pulled up alongside her Humvee and detonated explosives. Huff was killed, two other soldiers were injured. Ashley Huff is an inspiration – a college student, a sorority girl, and a soldier who set an example for all girls that you can accomplish anything.

Named for: SFC Andi Broom. Broom served in both Iraq and Afghanistan, where she drove for a Recovery Team, picking up destroyed vehicles and running emergency recovery operations. In a training accident at Fort Bragg, NC on August 10, 2013, a parachute malfunction dropped Broom 70 feet, causing two collapsed lungs, a torn aorta and internal bleeding. After immediate heart surgery, she was given less than a 1% chance to live through the night. Still she held on through months of hospitalization and over 30 surgeries. SFC Broom continues to improve and plans to return to Active Duty, staying positive through all of her hardships and setbacks, serving as an inspiring role model for other service members.

Named for: Cpl Casey Alan Owens, USMC, Ret. Owens dreamed of being a “lifer” in the Marine Corps and enlisted in August 2002, deploying to Iraq twice. On September 20, 2004, Owens and a driver set out to retrieve a hurt sniper. The two drove over a double stacked IED which threw Owens from the vehicle and caused life-threatening injuries, traumatic brain injury, PTSD, and forcing the amputation of both legs. After finishing his enlistment from multiple hospitals, Owens was honorably discharged in February 2006. He then joined Challenge Aspen, the US Paralympics ski team and excelled at mono skiing; he has said it was the one place he felt at peace and whole again.

Named for: SFC Benjamin (Ben) Clarke Jr. Born on November 11, 1919, the first Veterans Day, Clarke joined the military after the attack at Pearl Harbor in 1941, serving as aviator in the Army Eighth Air Force in 1942. On his 9th mission he was shot down over France, captured and placed in a POW camp. Imprisoned in the famed Stalag 17 in Austria from August 27, 1943 to May 3, 1945, Clarke was part of the gestapo “Death March” of 281 miles from Austria to the American lines after nearly 2 years of prison and during what was considered the worst winter in Europe during the 20th Century. General Patton’s Fourth Army liberated them. He has since retired in his hometown of Dearborn, Michigan.

Named for: Capt William Gary Burton Laughlin (USMC,Ret.) Gary Laughlin, aka “Quail”, was born in Ft. Worth, Texas in 1923. He joined the Marine Corps, twice serving his country as a U.S. Marine Corsair fighter pilot in the Pacific theater during WII, and then again in the Korean War. Laughlin has since been a dedicated supporter of those who have served and who are now serving in the United States military. At 91 years of age, Laughlin is well known at the Naval Post Graduate School in Monterey, CA, the epitome of “Semper Fi”.

Named for: Brigadier General Wilma L. Vaught, USAF, Ret. At a time when few women were in supervisory roles, Wilma Vaught knew she wanted to, as she says, “be in charge.” The US Air Force offered her that opportunity when they permitted non-nurse women to serve in Vietnam. Brigadier General Vaught served in the United States Air Force for more than 28 years, retiring in 1985 as one of the most highly decorated women in U.S. history. Throughout her career, General Vaught forged new paths and pioneered opportunities for the servicewomen who would follow. She was the driving force that built the nation’s only major memorial to the nearly 3 million women who have served in the nation’s defense, the Women In Military Service For America Memorial at the gateway to Arlington National Cemetery.

Named for: Karen Guenther, Honorary U.S. Marine.  Karen Guenther, a registered nurse with more than two decades of experience, is the inspiration behind the Injured Marine Semper Fi Fund, a nonprofit organization supporting the men and women of the United States Armed Forces and their families. On September 20, 2014, the Commandant of the Marine Corps General James T. Amos officially designated Karen Guenther as an Honorary Marine.  She was presented with a certificate that read: “Know Ye, that reposing special trust and confidence in the Patriotism, Fidelity and Abilities of Karen Guenther, I do Appoint her an Honorary Marine, United States Marine Corps, for her unyielding support and devotion to the Corps and Country.”

Named for: Army Lt. Colonel Congresswoman Tammy Duckworth. Congresswoman Tammy Duckworth is an Iraq War Veteran and former Assistant Secretary of Veterans Affairs. In 2004, Duckworth was deployed to Iraq as a Blackhawk helicopter pilot. She was one of the first Army women to fly combat missions during Operation Iraqi Freedom. When her helicopter was hit by an RPG on November 12, 2004 she lost her legs and partial use of her right arm in the explosion. She was awarded a Purple Heart for her combat injuries. As one of the highest-ranking patients at Walter Reed Army Medical Center, she became an advocate for fellow soldiers, testifying before Congress about care for Veterans and wounded warriors. In 2009, President Obama appointed Duckworth to be Assistant Secretary of Veterans Affairs. In 2012, she was elected to the U.S. House of Representatives from the 8th District of Illinois.

Named for: Specialist 4 Terry Francis Drown, US Army. Drown was born on October 24, 1944 and grew up in Kennebunkport, Maine as a record setting athlete. While attending the University of Maine, Terry was drafted; his family begged him not to go, but he responded to his nation’s call. Receiving orders for Vietnam, he volunteered for Long Range Reconnaissance Patrol (LRRP) and signed up for dangerous missions. On 11 June 1969, elements of the 11th Infantry Brigade lost ten men. Sp4 Terry Drown was among them. Drown had plans to return to Kennebunkport to teach history and coach. All who knew Terry say the same things: he was brave, courageous, tenacious and, above all, a good human being and true hero.

To help ID the pups on the camera, here are their names by collar color:

Come see the pups of the Warrior Canine Connection as they train to serve US Veterans.