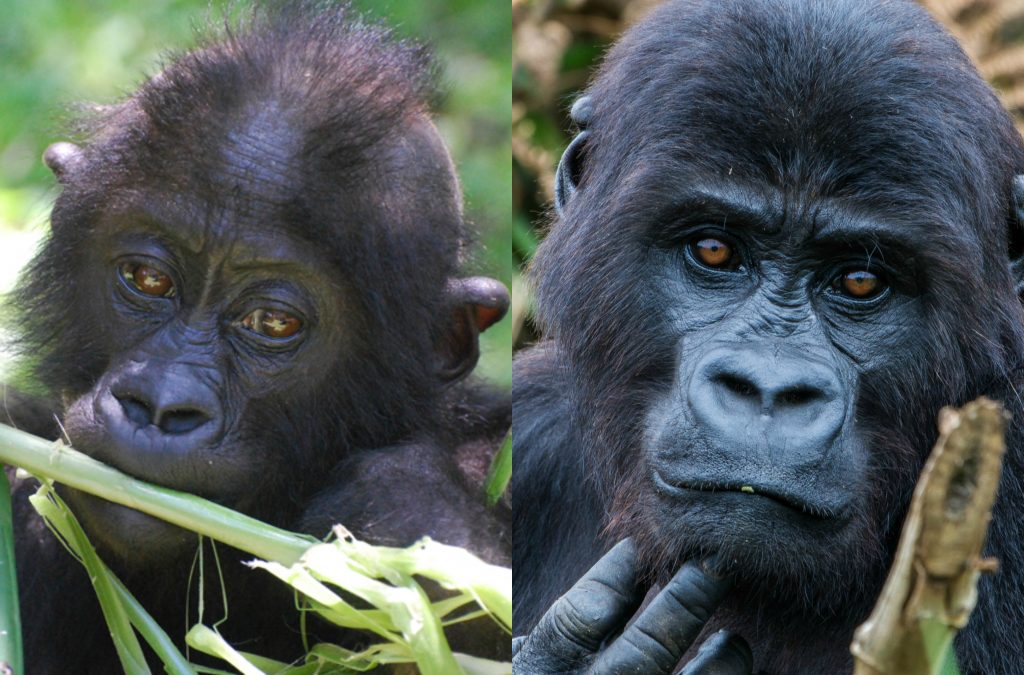 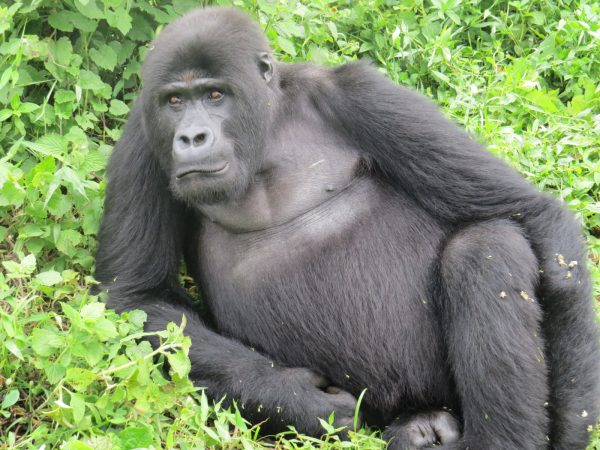 Just like wild gorillas, the Grauer’s gorillas at GRACE live together in a cohesive social group. Each gorilla was rescued as an infant, and the chance to live and grow in a surrogate family with other gorillas is a crucial part of their rehabilitation. But the GRACE gorillas aren’t babies anymore, they’re teenagers and young adults! And that means social dynamics and priorities of group members are shifting.

The second eldest male at GRACE, after silverback group leader Kighoma, Lubutu has long been known by caregivers as a playful, goofy young male. He is silly, active, and always playing and wrestling with the other young gorillas, including his best friend Shamavu, the last and youngest male at GRACE.

But recently, caregivers have reported that Lubutu is demonstrating more silverback-like behavior. When the group is in the forest and they hear an unusual noise, Lubutu is often quick to investigate. He’s showing more interest in mating with the females, and when the group comes in from the forest these days Lubutu often observes the group and comes in last. Lubutu is also growing noticeably larger, and our advisors suspect that he may ultimately grow to be larger than Kighoma.

This means that a transition of leadership within the group may be in the future, if Lubutu looks to challenge Kighoma’s dominance. 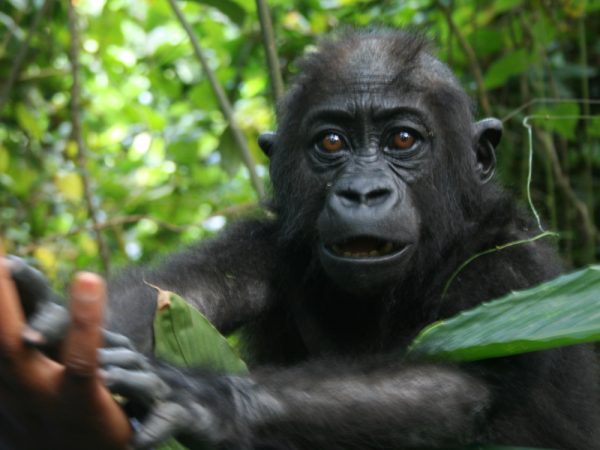 April, 2011 – Lubutu shortly after he arrived at GRACE.

The possibility that Lubutu may grow to be larger than Kighoma is a rehabilitation success for GRACE, considering where Lubutu started. While his captors searched for an illegal buyer, Lubutu survived for at least nine months eating human foods like sugar cane, cassava and salted fish – foods which are unhealthy for gorillas and especially inappropriate for an infant gorilla who needs milk. When he was rescued, Lubutu was suffering from severe hair loss and malnutrition and was very weak, dehydrated, and traumatized.

Lubutu’s life turned around when he arrived at GRACE. Despite being isolated for so long, he took to the other gorillas immediately and quickly became an active, playful young gorilla. Still, he suffered some growth issues due to the malnutrition he experienced before being rescued.

So, while it may spell trouble for Kighoma, Lubutu’s growth is a great example of the important rehabilitative care that takes place at GRACE. 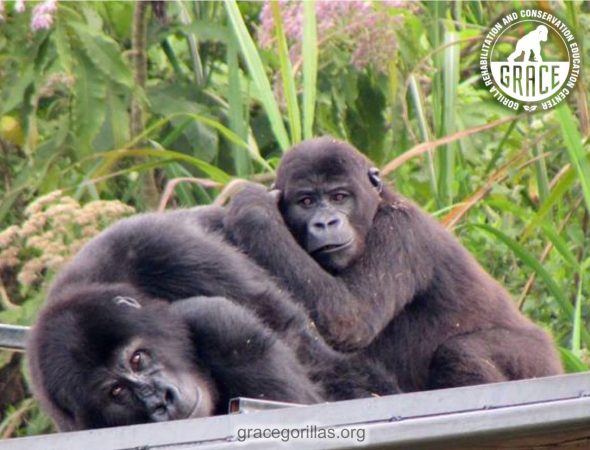 2015 – Lubutu and Kighoma play together in the mixing yard at GRACE.

Before Kighoma matured into the silverback leader of the GRACE group, while adult female Pinga led the group, Kighoma and Lubutu were playful pals.

Unlike Shamavu, who took Kighoma’s transition to leader in stride, Lubutu was resistant at first. For several months, Kighoma and Lubutu had an ongoing spat as Kighoma established dominance. Conflicts declined as Kighoma’s role became secure. Now, Kighoma lets Lubutu and Shamavu be, and they respect his role as leader.

But Kighoma has a major size advantage, and as Lubutu and Shamavu grow Kighoma’s dominance may not be so secure. In the wild, young males typically transfer out of their group as they enter adulthood to look for a group of their own. While the GRACE gorillas live in a single group now, it is possible that caregivers will need to manage multiple separate groups in the future, if the males cannot live together. We continue to consult with experts from zoological institutions who have managed multi-male groups to determine the best social arrangement for all the gorillas in our care.

Who will Mapendo side with?

As Lubutu continues to grow and mature, adult female Mapendo may have an influence over which male ultimately leads. Mapendo herself is in a constant back-and-forth struggle with adult female Pinga for status as alpha female, but she is close with both Kighoma and Lubutu.

Caregivers suspect that Mapendo may prefer Lubutu to Kighoma, and merely have to like Kighoma more right now because he’s in charge. 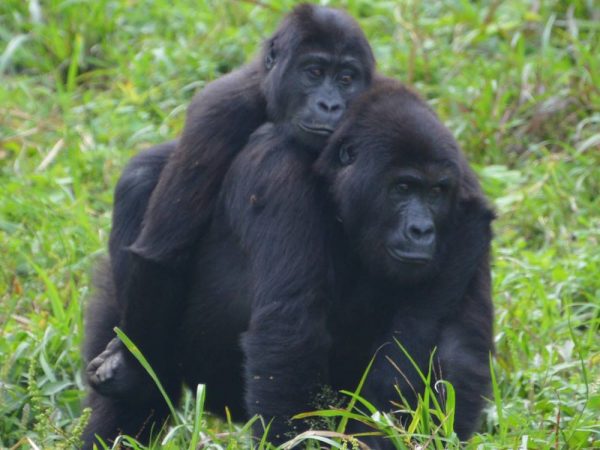 2013 – Lubutu gets a piggyback ride from Mapendo, his friend and occasional protector.

Conflicts and challenges for dominance are a normal part of gorilla life, and learning to live within a social group is an important part of the rehabilitation process. While GRACE caregivers will continue to monitor the relationship between Kighoma and Lubutu closely, for now Kighoma’s dominance is clear and things are calm.

Time will tell whether this stays true.

Gorilla Rehabilitation and Conservation Education (GRACE) Center is a 501(c)(3) nonprofit in the U.S. that operates the world’s only sanctuary for Critically Endangered Grauer’s gorillas in Eastern Democratic Republic of Congo (DRC). The largest primate in the world, Grauer’s gorillas only live in war-torn eastern DRC. Their numbers have dropped by nearly 80% in the past 20 years due to heavy poaching. They are considered one of the 25 most endangered primates in the world with only 3,800 individuals remaining in the wild. GRACE cares for 14 orphaned gorillas rescued from poachers and works to rehabilitate them so they can one day return to the wild. At GRACE, the gorillas live in a single gorilla group that functions as a surrogate family and spend their days in protected forest habitats. GRACE also leads field research and partners with local communities on education and conservation initiatives to protect a critical population of wild gorillas living in Tayna Nature Reserve. For more about GRACE, visit https://gracegorillas.org.