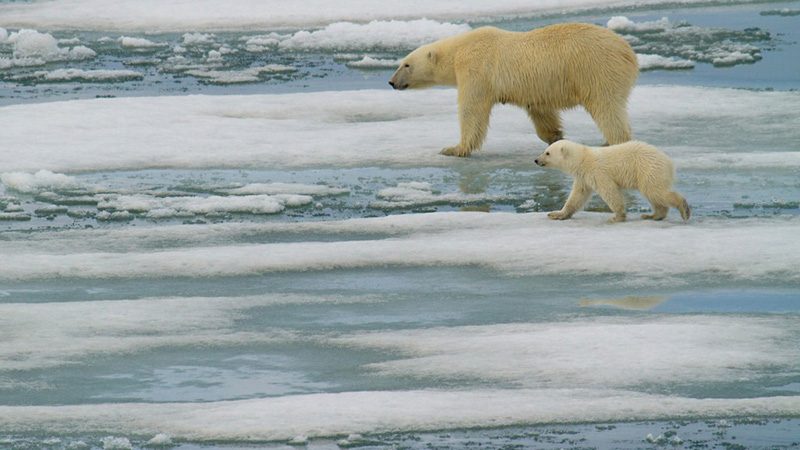 Looking for a Single White Female

It has been a long and cold winter on Hudson Bay for Ursula and her (now subadult) cub, just how polar bears like it. Since we’ve been tracking Ursula this season, she’s moved over 2378 km (1477 mi) across the sea ice from October to August. That’s a pretty respectable distance, especially since she stayed in the western half of the Bay all season.

After heading high up north with her cub in Hudson Bay at the beginning of the freeze-up season, Ursula eventually traveled back down toward the south and has spent the last 6 months zig-zagging well off the coast of Manitoba, slowly moving her way toward the coast of Wapusk National Park. It is likely that she would have weaned her cub several months ago and then found a spring fling, or maybe even flings, between April and June.

Ursula came ashore at the beginning of August, right at Cape Churchill, inside Wapusk National Park. So if anyone sees a single white female with a collar on the Cape polar bear cams, it’s likely you-know-who. We expect her to be big and fat right now, ready for a tough fall and winter and a very long fast.

If things go as planned, we expect Ursula to stay on land until about March. If she did mate successfully and the zygote does implant this fall, Ursula will enter a den and give birth to a cub or two this winter. We will only know that she is pregnant if we see her collar stop moving this fall and then see her emerge and head to the sea ice sometime in the spring. By then, she will be especially excited to eat a good meal of seal fat after 7 months on land, and her brand new cubs will begin learning what it means to be a polar bear.

Scientists will be commencing their fall research program soon in the area; if they spot Ursula, we’ll let you know.

Thank you for watching her journey this year, and stay tuned for the fall when we track a new bear and also keep tabs on Ursula’s whereabouts!