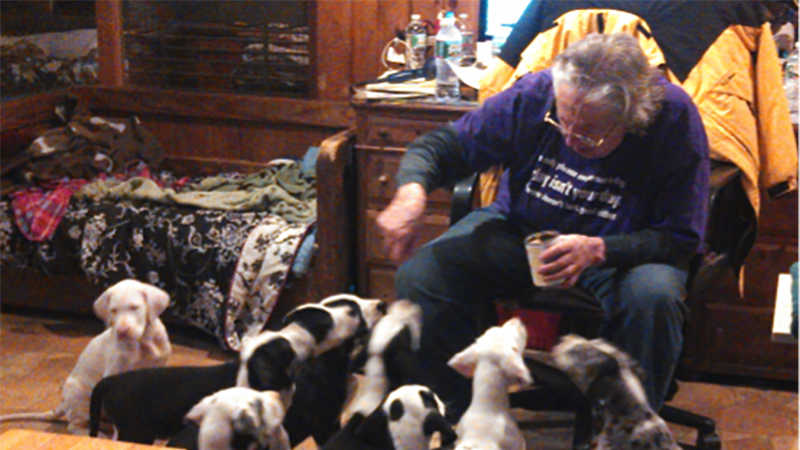 Getting Danes Ready to Work

There are hundreds of service dogs that could well deserve national attention of an American Kennel Club award, however our Great Dane “George” was chosen. It had a lot to do with the fact that his partner is a 48 pound cute little girl named Bella who now walks because of George.

For a variety of reasons, we now have donated over 110 Great Dane balance dogs to put people back on their feet walking. The part which I think bears some study, is that our strange training gets these Great Danes fully trained, (or preferably educated) passing all Assistance Dogs International tests and out thinking and working in the real world by the time they are 1 year old. Could this process be used with Labs and Golden Retrievers?

We start their training by the time they are 3 weeks old. When they have nursed for a bit so they are not very hungry, we introduce one pup to one dish of a goats milk/ground up puppy food gruel. We would never shove their face in the food but we assist with a spoon – a lift and lick operation – until they understand there is a bowl of food there somewhere. They often put one foot in to be sure. By 4 weeks they are eating out of their individual bowls very nicely. After they have had a meal, we serve desert, some canned food on a spoon, one at a time, say their name and serve the food, very soon because there is no competition for food, if we hesitate, the pup will naturally sit and look up waiting for more food to appear, and it does. The trick now is to produce the spoonful exactly when the butt hits the ground.

By 5 weeks we can add pups so there are 2 or 3 pups sitting waiting. By six weeks, 5-8 pups with no excitement, they know what is expected, sit and wait. At that point it is possible to take the entire litter out for a walk controlled only with a can of food and a spoon, tapping the can will tell them all to fall in line and we go for a walk, stopping every once in a while for a sit down and snack. We talk to them, we do not give commands, they listen carefully for that slight tap of the spoon on the can, which eventually becomes a very quiet “come on gang, pay attention”. We can then swap from spoon and can to small biscuits.

Once we have absolute control over the entire litter, we start to break it up, introduce a leash, which is never tightened, a couple of tugs and immediately release. We talk to them constantly; the two tugs on the leash for attention is left over from the two taps on the can, “hey listen to me and think”.

By five months, the harness “on” becomes a switch to work mode. “Get in the car and go somewhere” to look at new things while walking exactly the speed of the person by whom they are handled by. Add a few elevators, shopping carts and critically the one step on the stairs, up and down, plus the rest of generic life, with consistence and strict obedience to harness on and off rules. By the time they are 7 months old they are beginning to look and act like serious dogs, at least when in harness. Take that harness off, feed them a few treats and they will roar around like a normal kid when school lets out. By a year old when the harness is on, they are looking and thinking about whose feet are where and why. They are ready to work.

During this time they have basically lived in and around the various kennels and fields. We do let volunteers take them for occasional overnights but we do not want the pups to become too attached to anyone.

We do not go along with the puppy raiser concept. In my experience a dog can sometimes spend the rest of their lives looking for the persons who raised them.  The “oh how happy they are to see you” seems often to be “finally you are back in my life, can we really go home now?”  Then when they don’t the tail drops in submission and the joy is gone.

No dog leaves our driveway until they will follow the person all over, away from their friends and trainers, without a leash. They have to love to work.

There are a few concepts to discuss. One very primary lesson is we rarely use our muscles to “control” a Dane, is called “plan ahead” because eventually they will out weigh most handlers anyway. We talk to them, we never drag them around with a tight leash, and we never give our treats when we are actually teaching them to work. Once the harness is on, no treats lots of praise and no free time. The harness is a switch on and off duty. A normal chain training collar and 24-inch leash is what is used. The dog in harness is immediately next to their handler, never wandering.

Many taller Danes are not known for their physical courage, so another critical aspect is they have a play yard which involves stairs, with open backing, ramps, rocking horses and mannequins to get them used to someone standing still staring at them. Their sleeping quarters involve either steps or a ramp to a raised sleeping loft with bedding. It is much warmer on their lofts, they can see out windows and they get practice climbing the stairs to get there.

We breed our own style of Danes, which are shorter and heavier than the typical show Dane. The concept is best explained by comparing a basketball player to a football player. We need the football player type Danes for balance work. There is an old Amish saying that “in a work animal the leg should be ½ the height.”

We do not breed related Danes, often importing new bloodlines from European kennels. I realize pride goeth before a fall, but we have had no hip dysplasia or bloat since I started this in 2003. Regarding age, the the dogs I put out in 2004 needed to be replaced in 2014, after having worked for 10 years. We have had a few earlier deaths for specific causes like cancer.