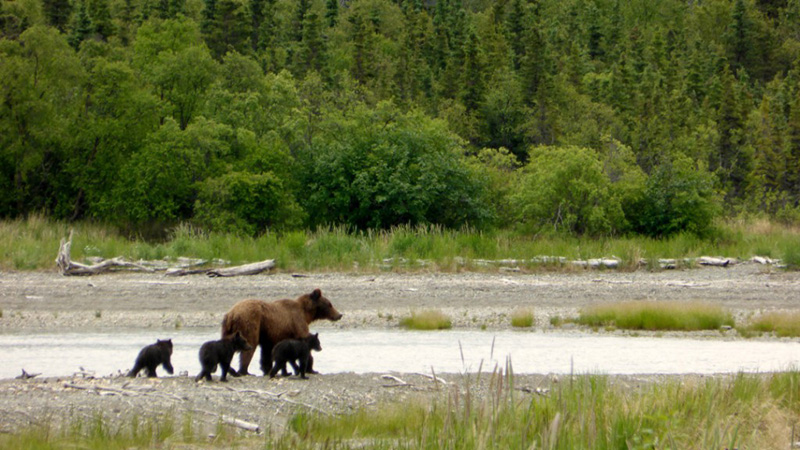 Brown bear, where have you gone?

As bear sightings dwindle along Brooks River, the Bear Cams still catch periodic glimpses of single bears and a few females with cubs. However, there’s a dearth of bears at Brooks River compare to peak bear times in July and September. Fall is a season of change, and change comes quickly in Katmai. Where do the Brooks River bears go in the fall? Are they denning right now and are we witnessing the last hurrah for Brooks River bears in 2016?

Information specific to the denning behavior of Brooks River bears is very limited. In the late 1970s, biologist Will Troyer and park staff attempted to track the movements of Brooks River bears during spring, summer, and fall. Troyer was able to find a few radio-collared bears in areas where they likely denned—on the slopes of Mount Katolinat and Mount Kelez, in the vicinity of Ikagluik Creek north of Mount Griggs, and even as far as Wolverine Creek at the base of Kukak and Stellar volcanoes. Curiously, no radio-collared bears at Brooks River were tracked to denning areas on Dumpling Mountain, although bears hibernate there frequently.

In Troyer’s study, he found that female bears moved less far than male bears to their denning sites.

The study was not able to ascertain when the bears entered their dens. However, from other studies done in Alaska and North America we can surmise that Katmai’s bears enter their dens anytime between mid October and mid December. In Katmai, the denning window may be narrower as studies from Kodiak Island and the southern Alaska Peninsula documented bears entering dens from November to mid December. In general, pregnant females and females with cubs enter the den earlier than single females and males, but that chronology is not universal. Some biologists report no difference in den entrance date based on sex or reproductive status and there are always some male bears that den before all females do.

The entrance to a vacant bear den on Dumpling Mountain. For scale, the hiking poles are 120 cm long.

The migration to a bear’s denning area probably isn’t a quick journey. While bears have the capability to travel long distances in a day or less, they often move slowly toward their denning area, sometimes only covering a few kilometers a day. Bears become lethargic as their physiology begins to switch into hibernation mode (a change that can take weeks). They spend more time resting and sleeping and less time moving. When Brooks River bears leave, they’re probably doing so slowly and resting frequently, not moving in epic marathons of endurance.

Biologists hypothesize that several triggers prompt bears to enter their dens and hibernate: a growing scarcity of food, changing weather, and unconscious physiological changes. We’re seeing the first two on the cams. Bears are catching fewer fish as the last salmon finish spawning and cold temperatures are descending on the region. Fall’s rapid changes are symbolized by bears moving away from Brooks River and into the next phase in their lives.