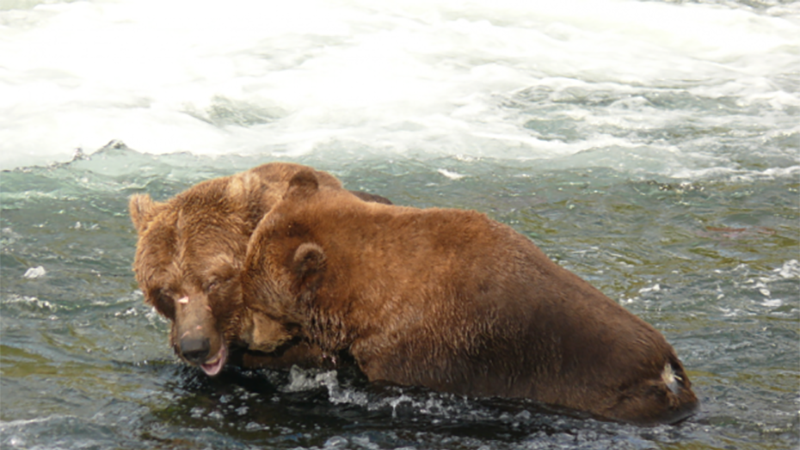 Bearcam often captures the playfulness of bears. We witness cubs sparring with their siblings, mother bears wrestling with their cubs, single bears toying with sticks and logs, and even adult bears partaking in friendly scraps. Recently, bearcam has captured two bears, 151 Walker and 503 Cubadult, play fighting in Brooks River.

We see bear cubs and subadults playing the most. In contrast, I’ve never seen many of the river’s older adult bears play. Bears may be playful when young, but that playfulness may not carry over when they become competitive adults. Bears, like people, change as they mature.

If you only know 856 from bearcam, it might be hard to imagine him playing with any bear. His disposition and behavior is indicative of dominance. He goes where he pleases, fishes where he wants, and faces little or no competition for access to female bears during the mating season. He shows no interest in play. Yet, 856 was once a young, growing bear much like 503 and 151.

856 is now the most dominant bear at Brooks River. He’s held that rank at least since 2011 when I first started tracking interactions between bears at the falls. In September 2008 though, 856 (who was then identified as 888 in the fall) played with 489 Ted at Brooks Falls. That year, Ted and 856 were adults, but neither were considered old bears. Ted was at least 10-12 years old while 856 was probably a year or two younger.

From my observations, Brooks River’s bears become less playful as they age. Is this a sign of maturity or a relatively high hierarchical rank? While play is not a well understood behavior in non-human animals, in bear cubs it may increase their survival rate to independence. Perhaps play’s supposed advantages and their enjoyment of it dwindle to nothing once bears become fully mature adults.

Whatever the reason, we should enjoy a bears’ playfulness and take note of which bears do it. Young male bears that have played together in recent years–like 89 Backpack and 32 Chunk, 151 Walker and 503 Cubadult–could become fierce competitors for food and females in the future. Maybe our long term observations of these animals and their behaviors will allow us to better reflect upon and understand the changing nature of bears.