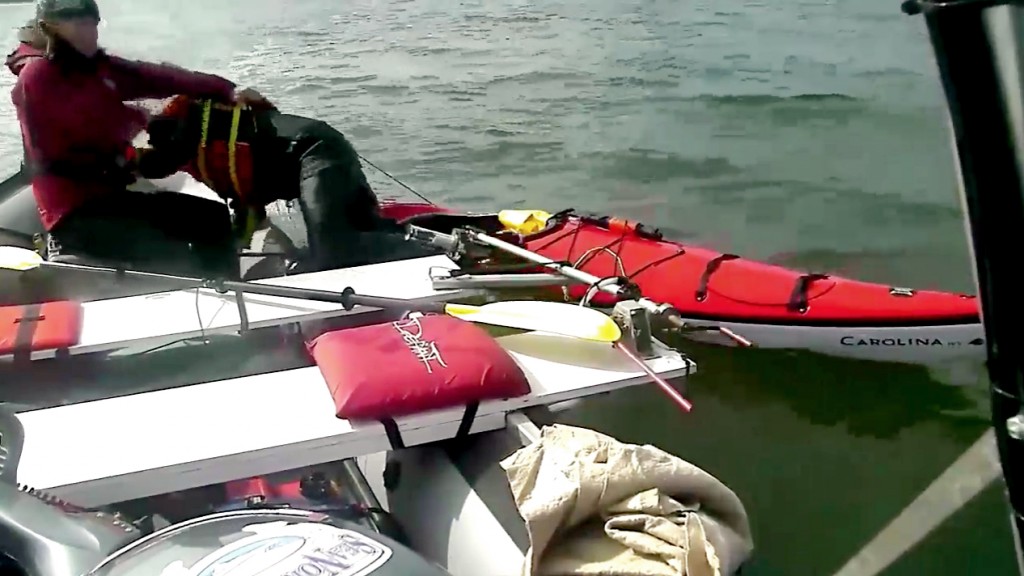 Hayley Shephard pulls a kayaker from the frigid waters

Beluga Boat to the Rescue!

Beluga Boat Captain Hayley Shephard’s quick thinking and decisive action made for a heroic rescue Monday live on the Beluga Cam. Check out her thrilling first-hand account and then watch all the action in a highlight below.

“Throughout the summer in Churchill, numerous people sign up to go whale watching or kayaking. Some brave the frigid waters and snorkel, all in hope of having an intimate and rewarding experience with the Beluga whales in the Churchill River estuary.  When I was guiding for Sea North Tours, a local tour operator, I was often asked by guests, “Do the whales ever cause a kayak to capsize?” My answer to that question was “no, that is very unlikely”, until today.

Every day when I take the Beluga Boat out on the water, I scan the horizon with my binoculars to get an idea where the whales are situated and the arrangement of their pods. I’m always looking for a large sociable group, surfacing and swimming together and once found, I motor slowly in their direction. Today I found one of those pods and together we spent the first two hours drifting side by side, as if my boat was just another Beluga within the pod.

After a while, the pod began to disperse, and so I looked elsewhere for more action. I noticed a single red kayak in the distance with Belugas all around it. I started to make my way in that direction. For a few minutes my attention was elsewhere and when I glanced back towards the kayak, I suddenly noticed the kayak was no longer red, it had turned white. Being an avid kayaker myself, I knew exactly what this meant. The kayak had capsized and I was now seeing the white hull.

I reacted quickly by lifting up the underwater camera (I’m glad I even thought of this) then picked up speed and raced towards him. As I approached, now in ear shot, I called out to the paddler who was now clinging to his upside down kayak, “Are you ok, would you like some assistance” I questioned.

“No I am not and yes I would” was his instant replay.

I approached him on the downwind side and explained that I would pull him in to my Zodiac first followed by his kayak, paddle and other floating debris. He agreed with this plan.

I grabbed the gentlemen by the lifejacket shoulder straps and pulled him in to the Beluga boat. He seemed in good spirits and announced that a Beluga had nudged his kayak, causing it to capsize. “I’ve paddled out here numerous times with the whales and never have they knocked me over, this was an absolute first” he explained quite gleefully. He was a local and was well prepared, wearing a wet suit so I was thankful that he wasn’t shivering. I offered him a hot chocolate which he did not refuse and happily sipped at the warm beverage as I pulled the kayak aboard and searched for his other belongings.

After dropping him ashore, together we emptied the kayak of water and he was then able to pack it up the beach to his truck. As we exchanged names and shook hands, he offered his gratitude. In exchange, I thanked him for the added entertainment as I pointed to the On Deck camera and announced that people from all over the world witnessed the rescue. “You are on “explore.org”, I laughed. Thankfully he chuckled with me.

Every day is different on the Beluga boat, right?”