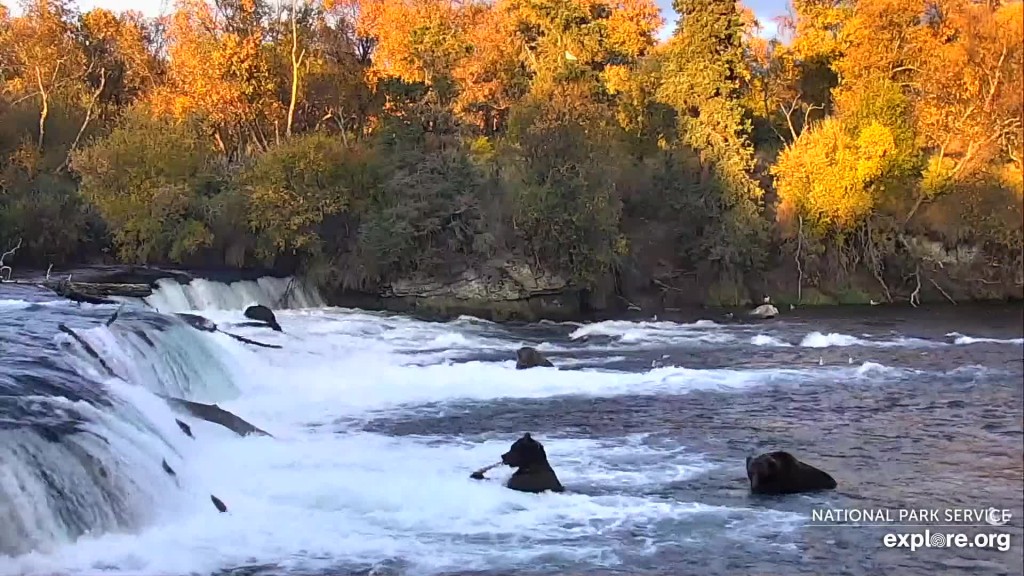 Fall has arrived at Brooks Falls Snapshot by Larinor

Fat Bear Week is in full swing!!  Two days of competition are completed and a third has begun as we publish.

We’re posting a copy of the Bracket here that has the winners so far filled in and shows the match ups yet to come.  You can go to the Katmai Facebook page to continue voting daily until the crowning of the 2019 Fat Bear on October 8. 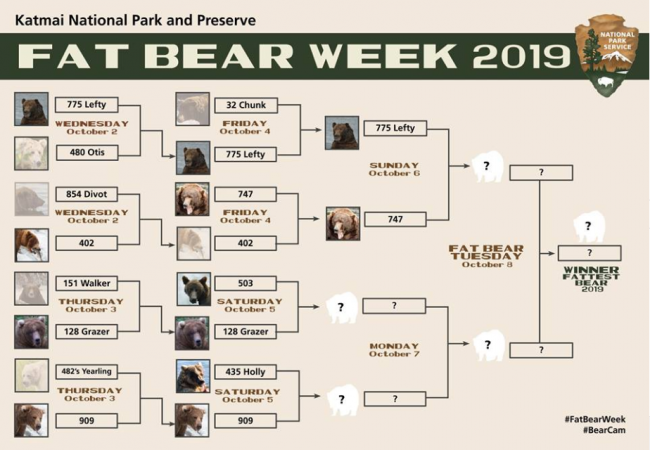 There’s still time to start campaigning for your favorite Fat Bear in the upcoming matches!!  Get started on those campaign posters! We’d love to see your posters in the comments on explore.org’s Bear Cam page and also please post them on this blog so everyone can enjoy them all in one place! (If you can’t post on the blog, email your posters to feedback@explore.org and they can add them.

775 Lefty, our first Fat Bear winner of the week, gave us a nice close up view. 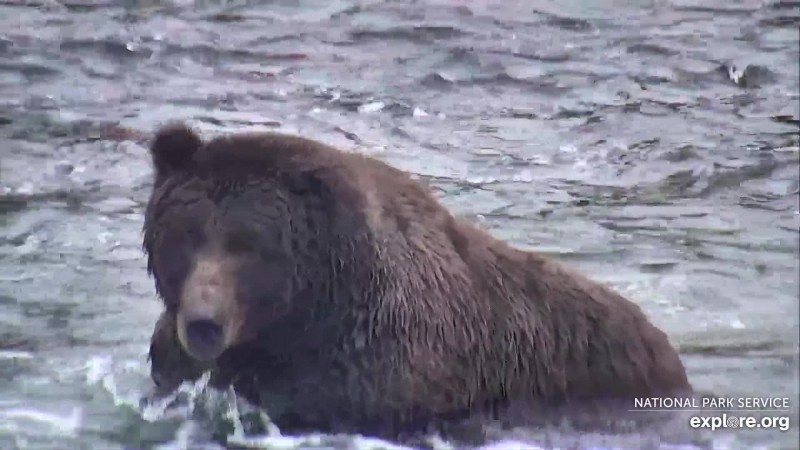 480 Otis, completely unaware of his defeat in our human world, has been in full view often this week. He’s spent a lot of time moving through the lower river area, pulling up fish after fish and slowly eating them. 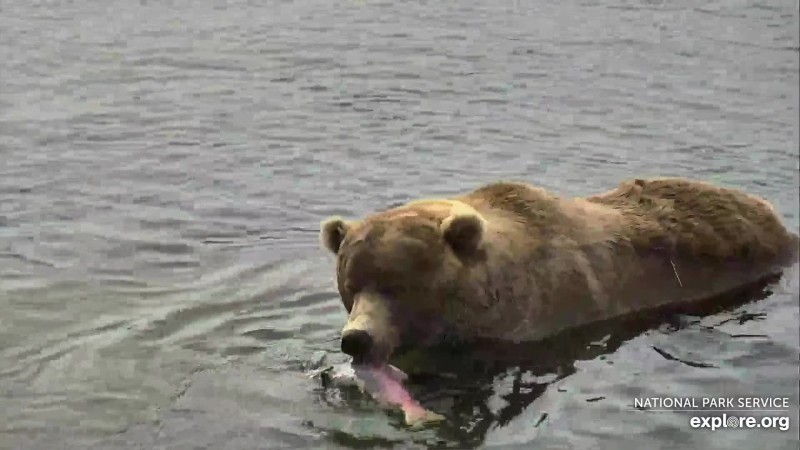 Otis also spent time in the Jacuzzi below the falls, catching a number of fish. 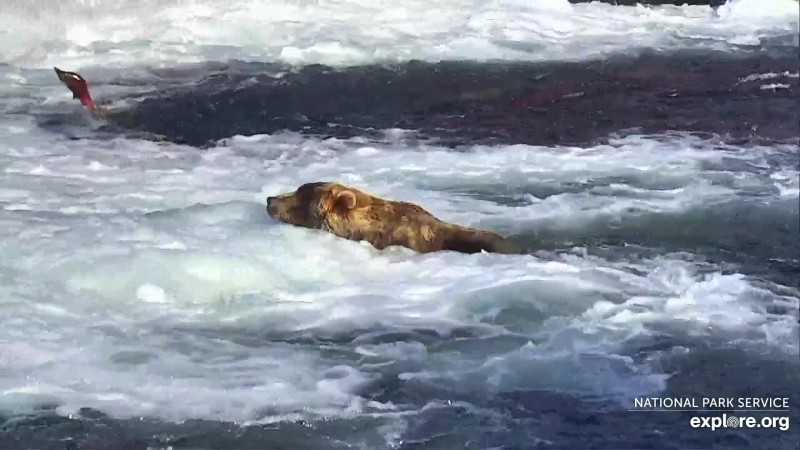 480 Otis in the jacuzzi Snapshot by merry_mermaid

And to make the Otis trifecta he also spent time in his office. 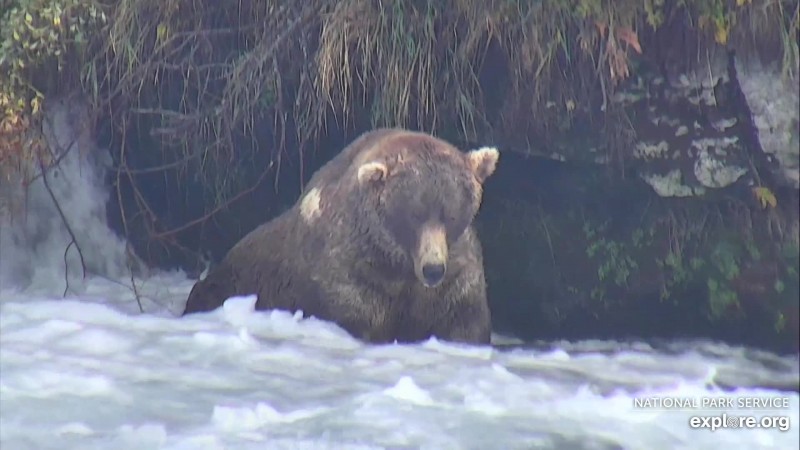 480 Otis working hard in his office Snapshot by LaniH

We can tell that the bears are starting to slow down their activity and are looking more lethargic.  One minute they are actively fishing or eating, and the next minute they are asleep – in whatever spot they happen to be.

68 demonstrated this in the Lower River a few times.  Once it looked like he just dozed off midway through eating his fish. 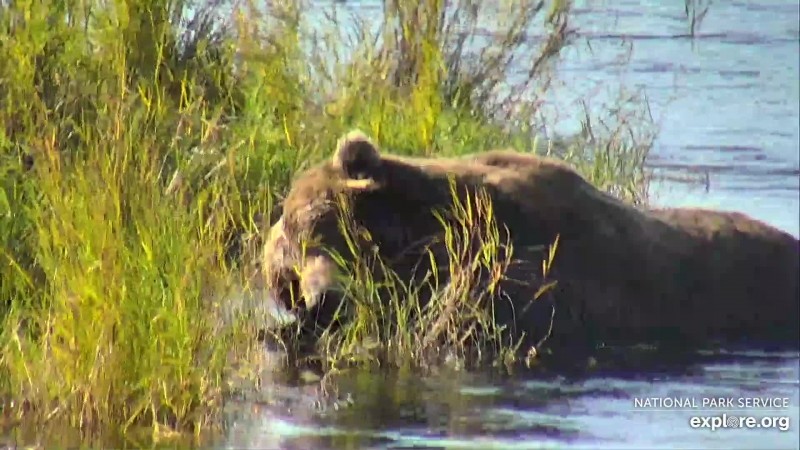 68 napping in the river Snapshot by GreenRiver

474 also had a nap in a rather unusual position when he slumped over the large boulder in the far pool at the falls. 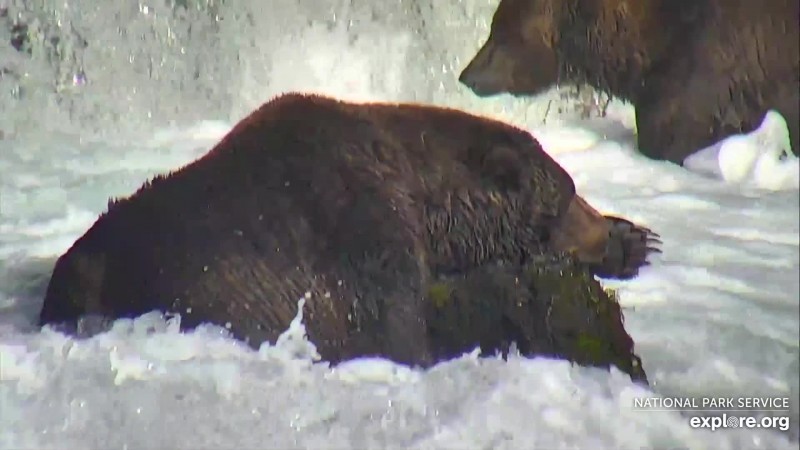 Bear 806 was seen this week in the Lower River on the closed trail. 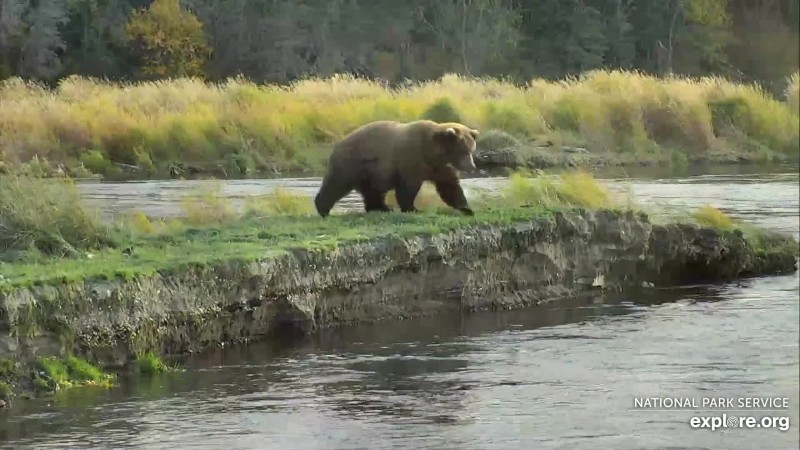 806 seen on the closed trail Snapshot by Blair-55

274 Overflow who was absent this spring, showed up at the falls this past week. 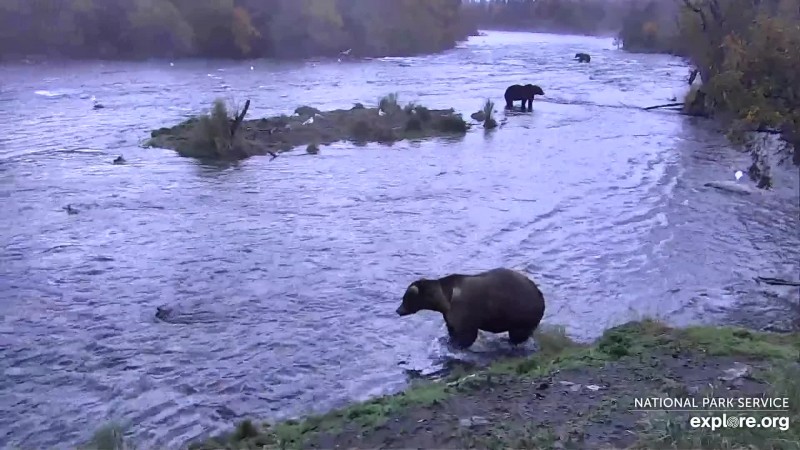 402 and her cubs were in view often this week.  We saw them in the Lower River area near the spit road. 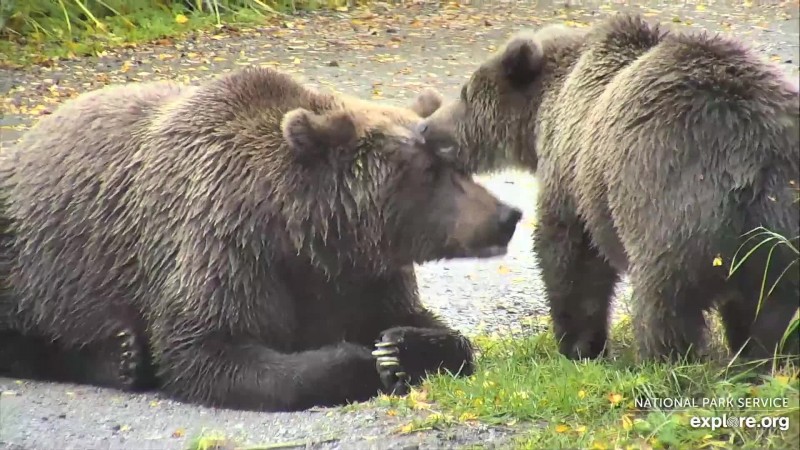 402 and one of her yearlings Snapshot by Tiny Julz <><

We also saw them at the falls, where 402 once again demonstrated her diving technique in the jacuzzi. 402 diving in the jacuzzi Snapshot by BonnieLee

708 Amelia and her cubs entertained us with views near the Lower River platform. 708 Amelia and coy resting near the platform Snapshot by jegrabau

719 and cubs were seen on the closed trail near the Lower River. 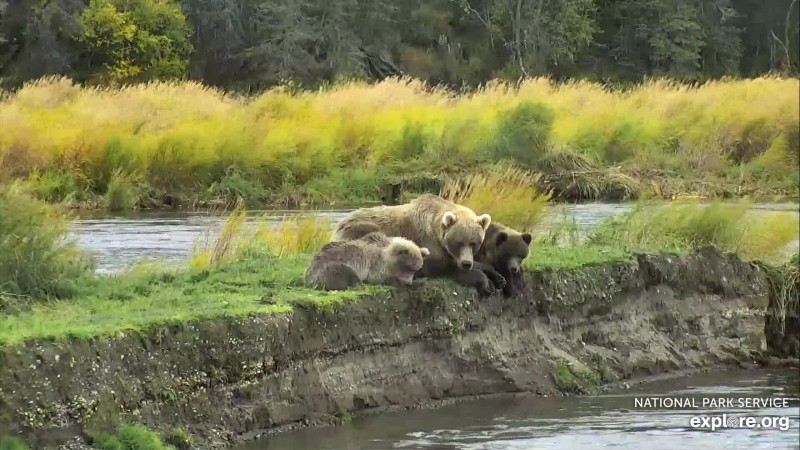 The closed trail got a little smaller when 719 took a chunk out of it!

171 with her coy and 273 with her coy had a meet and greet this week.  The cubs were not quite sure what to do about each other being so close. 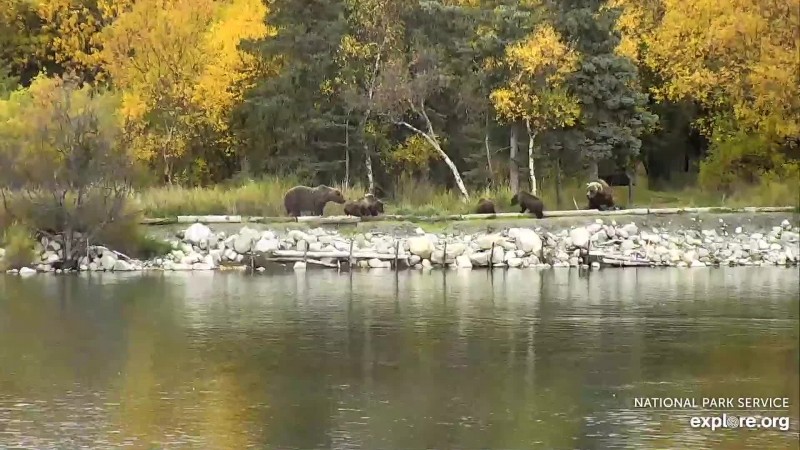 171’s cub did a little bluff charge toward 273’s cubs before quickly retreating behind Mom.

One of 273’s cubs got more than it bargained for while playing around on the closed trail as it got knocked off the edge by a sibling.

273’s cub was seen eating clay from the river bottom.  Known as geophagy and thought to possibly be a digestive aid, a viewer wondered how a young cub would know to do this.  Mike Fitz provided this comment:

“It’s a combination of instinct and learning. Most bears are probably introduced to it when they observe their mothers eating clay. Some may stumble upon it more by chance and explore it out of curiosity. “ 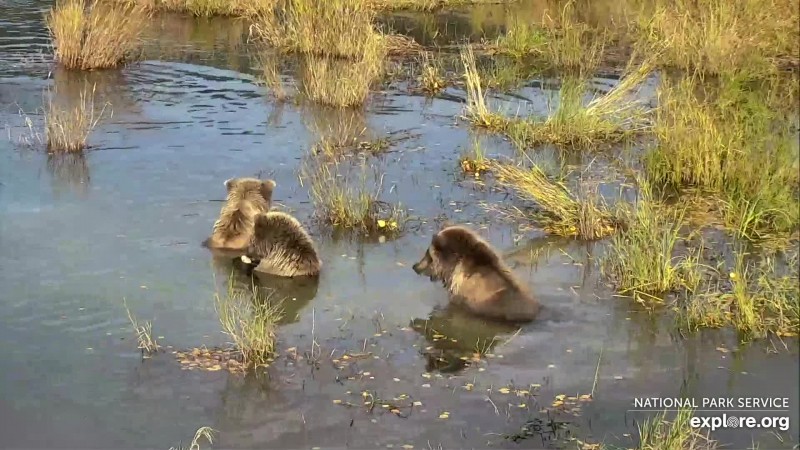 We have seen plenty of play sessions between subadults this week from the falls to the lower river. subadults playing on the closed trail Snapshot by CamOp Nan 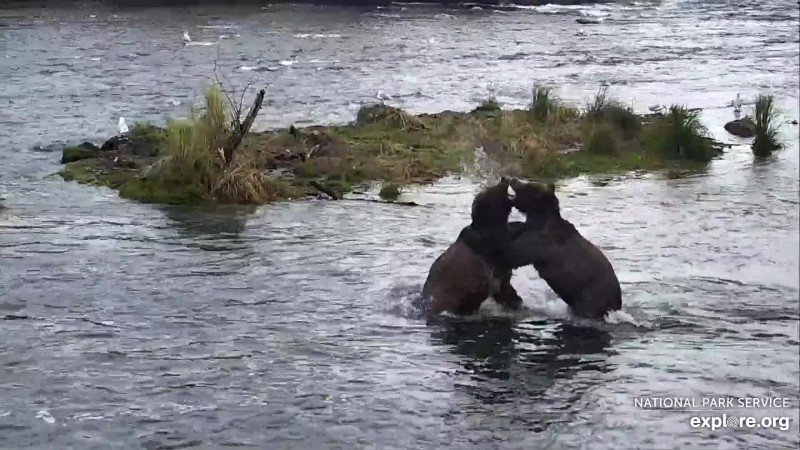 subadults playing at the falls Snapshot by ColoradoCarol

Bearcam fans have also been treated to some bonus days of the lover river cams. We’re not sure how many more days we’ll have left, but we will sure enjoy them while they are live. They have provided us with some glorious fall views and gorgeous sunsets. 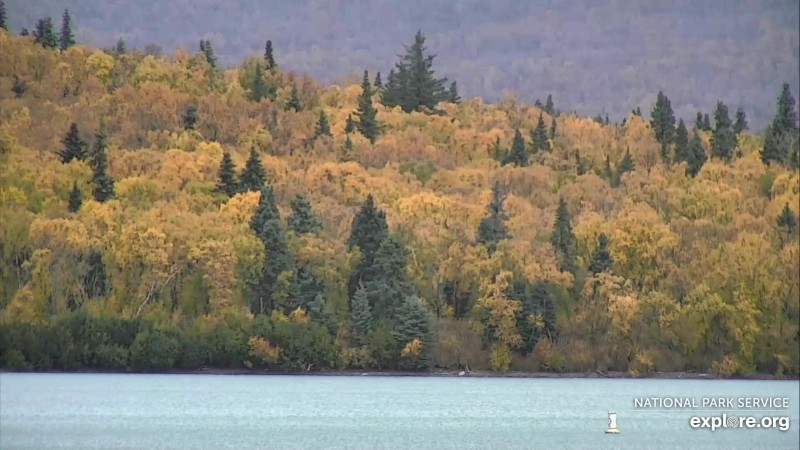